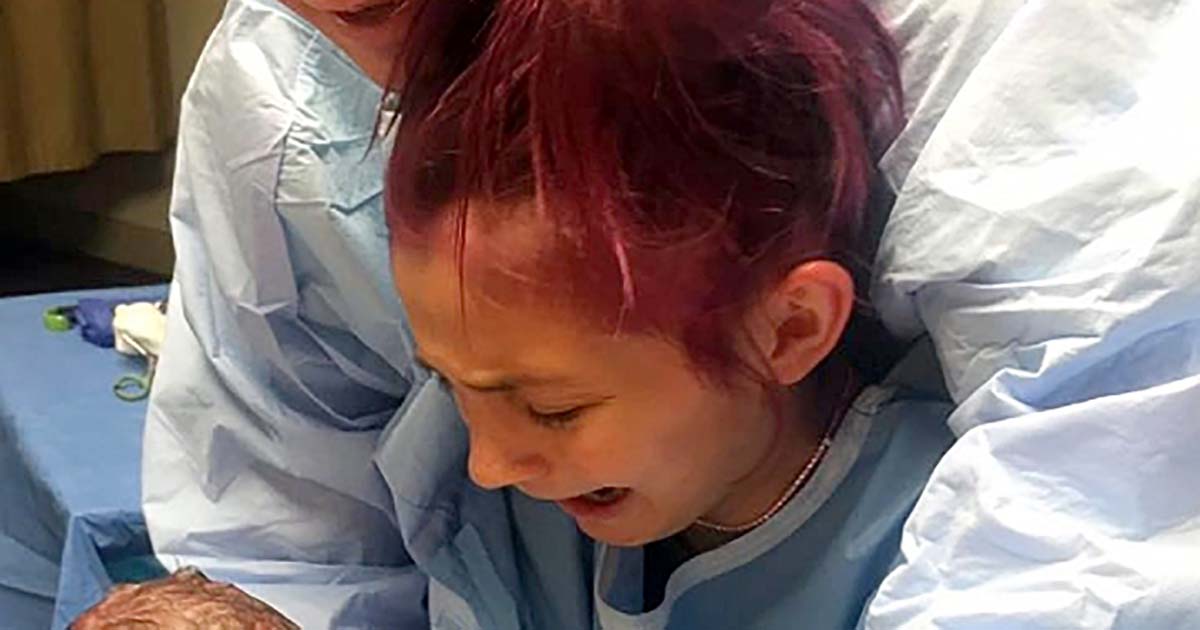 Going into labor can be a scary time for any woman. Sure, this is the moment you’ve been waiting and preparing so long for, but when all things are said and done it’s a terrifying unknown you’re stepping into. Anything could happen.

When Dede Carraway went into labor herself, she could never have known how eventful it would be. You see, Dede had formulated a birth plan, and so thought she had some idea of what to expect.

As it turned out, though, the OB-GYN suggested a change that left her speechless.

Fortunately (for everyone online) someone was there to capture what followed …

When Dede’s 12-year-old daughter Jacee entered the delivery room, she feared she was going to miss the birth of her sibling. As she explained to WS News Now: “I started crying because I thought I wasn’t going to get to see him be born, because I was too short.”

Thankfully Dede’s doctor, Dr. Wolf (yes, that is his real name), had something up his sleeve …

Instead of simply moving people out of the way and clearing space so that Jacee could see, Dr. Wolf went one better. Did we say one? We meant one million … the doctor actually asked Jacee if she wanted to help deliver her baby brother into the world!

Of course, both Dede and Jacee expressed concerns – it should go without saying Jacee has no experience in delivering babies.

After some reassurances, however, Jacee got into her place in front of Dr. Wolf and helped welcome her brother.

“I actually delivered him,” Jacee said. “He let me actually push down and pull the baby out…. I was like, wow, like I’ve played fake doctor before, but this is the real thing, this is is the real deal. I was really nervous.”

As far as deliveries go, Dede’s was far from perfect. Her epidural wasn’t working, so she was left in crippling pain. That didn’t matter too much, though; Jacee’s face gave her all the relief she needed.

As Dede told WS News Now, it was a moment she’ll never forget: “Seeing the emotions on her face, it made me cry. I’m about to cry now! It was just a good moment for me.”

What an incredible offer from Dr. Wolf. He’s certainly given Dede and Jacee memories that are going to last a lifetime!

Do you think the doctor’s gesture was a brilliant idea? If so, share this article to spread the inspiring story.