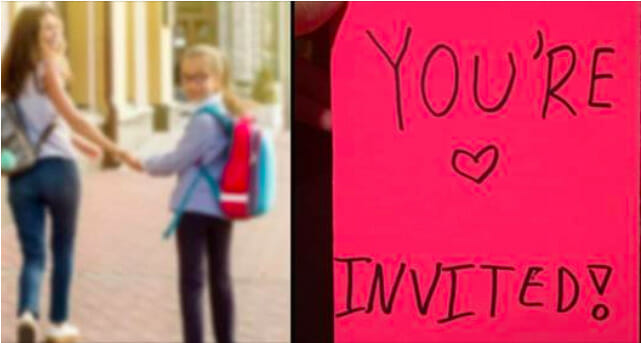 As parents, being there to support our children in their times of need can be daunting. And as children grow, so do the variety of their needs.

Unfortunately, despite efforts to spread awareness and prevent bullying, it continues to plague too many schools around the world, and parents simply can’t seem to always keep up.

But what if absolutely everyone stepped in and made an effort to put an end to this undesirable and negatively impactful behavior? Such as heroic 12-year-old big sisters, for example.

A young girl was getting bullied by some classmates at school. But when her big sister, 12-year-old Ava found out, she knew she had to do something herself.

Her solution is now understandably spreading like wildfire online — it is simply spot on.

She decided to send her little sister’s bullies a very special ‘invitation’ — one they were guaranteed not to forget for a long time.

On the cover in big letters she wrote “YOU’RE INVITED”.

“You are officially invited to stop being jerks to my sister!” Ava then wrote inside. She then added the kind of details one would include in a standard invitation.

What to bring: Bring your nasty attitude and throw it right in the trash can!

Why: You guessed it folks, you’re being jerks!

She even included different ways they could ‘RSVP’:

“If you can’t make it, don’t worry, you are welcome to come to my angry and emotional 7th grader wrath instead!” she ended.

On the back of the card, Ava wrote out the word “stop” in 20 different languages, “cause English isn’t enough 4 you!”

Such a brilliant solution by a young, but protective big sister! Share if you loved Ava’s invitation to her sister’s bullies as much as we did. Bullying must end now — and everyone can do something about it!