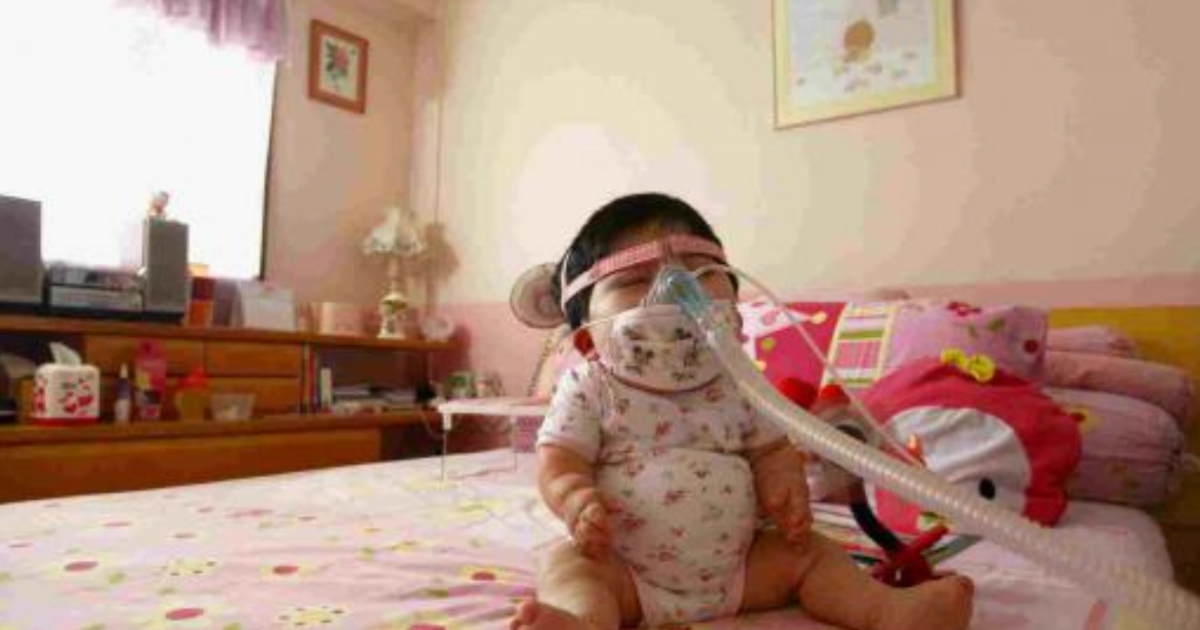 It’s hard to imagine what it would feel like to be caught in a baby’s body – for over 17 years.

But that is exactly what Teo Pei Shan from Singapore had to live with.

When Pei Shan was born, doctors discovered that her legs and arms were much shorter than with most other babies.

Despite thorough investigations, doctors were never able to provide any definite medical explanations for her extremely unusual condition. Their best guess was that Pei Shan suffered from Sanfilippo disease, also known as Mucopolysaccharidosis Type III. The disease is extremely rare and affects affects bones, organs and the central nervous system.

What was certain for Pei Shan however was one clear fact: She would never quite be anything like most children.

Pei Shan was born August 5, 1998 at Mount Elizabeth Hospital in Singapore. She was a perfectly normal and healthy baby throughout the pregnancy and her delivery went well.

Pei Shan’s parents recall how excited and joyful they were as they were prepared to welcome their little baby girl to the family.

They plowed through books on parenting, stayed informed on the latest news on children’s upbringing, and decorated a room for their baby.

And because everything went well during pregnancy and delivery, the parents could only be thrilled and excited to welcome  their beloved daughter.

But everything soon changed. Pei Shan stopped growing after three months. She also began to develop one health problem after another.

“Each time we thought we’d overcome one hurdle, another blow would hit us and we would have to go through the roller-coaster ride of suffering and emotions,” says father Qi Kuan Teo.

Pei Shan’s mother was ultimately forced to resign from her job in order to take care of her daughter full-time. The only income therefore now came from father Teo, whose low-paying job as a taxi driver did not make things any easier for the family.

The family spent more time in the hospital than at home, and everything was extremely stressful – mostly because no doctor was able to make a firm diagnosis on Pei Shan’s condition.

When Pei Shan was 1, she had a serious calm inflammation and was hospitalized yet again. Doctors desperately tried to find out what caused all her problems, finally arriving to the conclusion that the little girl was probably affected by Mucopolysaccharidosis type III, also known as Sanfilippo disease.

But this was no easy ride – no one in the whole world was affected by the same condition.

Nevertheless, the years went on. Pei Shan did not grow up like most children – she was quite literally stuck in a baby’s body.

Still the determined girl, encouraged by her loving parents, was enrolled in a special school. Unfortunately, because doctors feared the risk of infection, she was forced to quit after a few months.

At age 3, Pei Shan developed obstructive sleep apnea and was subsequently forced to wear an oxygen mask around the clock.

Despite all her trials and hospital visits, her parents’ spirits remained high. They were inspired by their daughter’s desire and joy of life. Of course they also experienced very difficult moments.

The worst were the looks they often got from other parents.

“Some parents would pull their children away, like my daughter is a freak,” Ms. Chew told German site Hefty.

But there were also many that supported the family. Thanks to large donations from loved ones and strangers, the parents managed to afford the necessary treatments from various specialists.

Despite that Pei Shan grew in age, she was in many ways still a baby.

Despite this, she learned to write, talk, play the piano and was in many ways like any other teenager.

Despite her many challenges, the brave girl fought against her disease with tremendous will for over 17 years.

And her parents never gave up hope for their little angel.

“Sometimes, she’d ask us why she looks different from the other children, and we always tell her that’s because she is special and unique. She is a happy child and little things like watching her favourite show or eating her favourite food make her day,” father Teo says.

Last year, she achieved her lifelong dream: to play the piano before a large audience, at a charity concert.

“When we asked Pei Shan if she was nervous, she just replied very firmly, ‘No!'”, her parents say.

Unfortunately, Pei Shan’s health deteriorated drastically over the summer of 2016.

She was given emergency treatment with morphine injections, after suffering from severe respiratory problems. She died peacefully in the hospital a few days later, with her parents by her side. Pei Shan had requested a bright burial set in a Hello Kitty theme, her favorite character, and her family naturally conceded.

The family took the opportunity to thank everyone who’d helped the brave girl during her 17 years on earth, to give Pei Shan the best conditions to live as healthy a life as possible.

Although Pei Shan’s life was full of challenges, she was always optimistic and never gave up. I therefore think her story is so inspiring and really worth spreading throughout the whole world and for many years to come.

What an incredible story and family who prove that there is always a way to enjoy life!