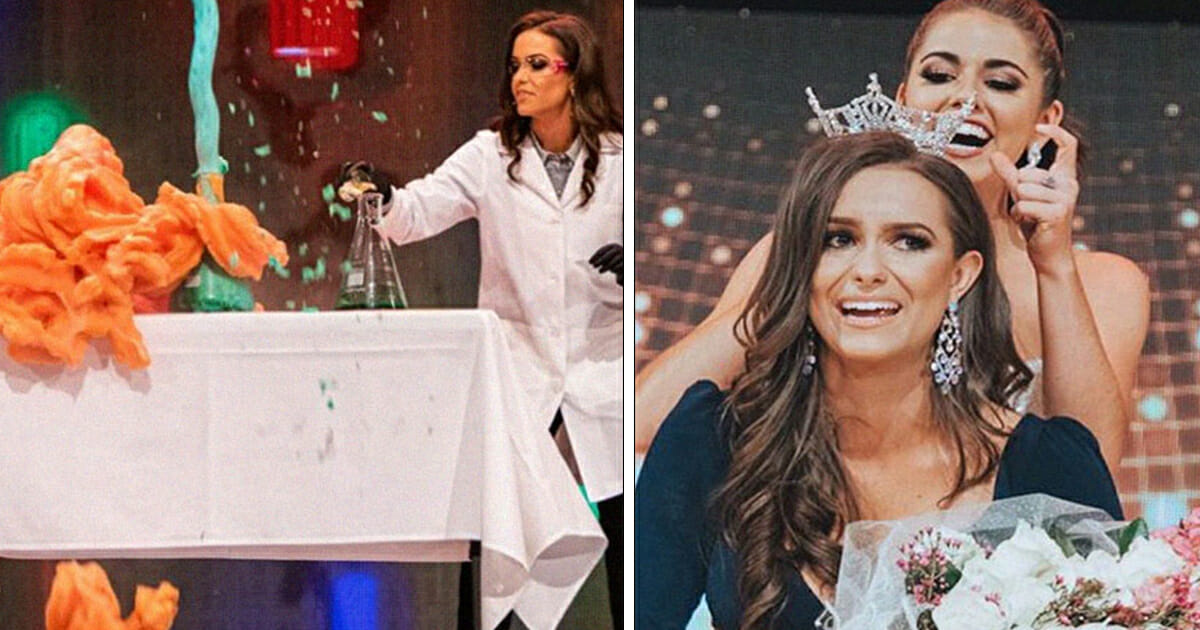 Forget the beauty-focused pageants of the past, the Miss America competition is evolving to reflect far more than just looks.

Anyone doubting that need only look at 24-year-old biochemist Camille Schrier, who was recently crowed Miss Virginia after wowing the audience with a science experiment.

Schrier steered away from the usual talents showcased in these competitions – those that can so often include singing, dancing or magic tricks – and instead opted for what she knew best: raw science. Ms. Schrier stepped out onto the stage in a lab coat and goggles, proceeding to demonstrate the catalytic decomposition of hydrogen peroxide.

Camille Schrier wore a lab coat and heels on stage to demonstrate the catalytic decomposition of hydrogen peroxide, known as the 'elephant toothpaste reaction.' She plans to use her new platform to promote women in STEM. pic.twitter.com/2Q54XCqcMu

Producing what’s known as the “Elephant Toothpaste” reaction, the experiment entails the mixing of a number of chemicals, resulting in an explosion of blue and orange foam.

Doesn’t sound very much like a traditional beauty pageant, does it? Well, that’s because it’s not.

The game has been changed, and it was precisely this “evolution”, one that places less importance on looks and more on genuine talent, that inspired Schrier to enter.

Speaking to IFLScience, she said: “The evolution of the Miss America competition, which reflects greater inclusiveness, and an opportunity to make a difference and win scholarships inspired me to step forward this year and compete.”

Have you ever had your entire life change in one instant? Last night, mine did, as I was crowned Miss Virginia 2019. I can’t even say that I’ve dreamt of this moment…because I never thought this was possible even in my wildest dreams. I am so excited to spend the next year traveling our commonwealth advocating for STEM education & drug safety and abuse prevention. Oh, and I’m going to MISS AMERICA! I’m overwhelmed with so many messages of support, and truly could not be more grateful. Follow my year as Miss Virginia at @missamericava!

“I am more than Miss Virginia. I am Miss Biochemist, Miss Systems Biologist, Miss Future PharmD looking toward a pharmaceutical industry career.”

You can watch the video of Schrier’s experiment below:

It transpired that Schrier’s novel approach not only inspired the onlooking crowd, but was also impressive enough to land her first place.

She was crowned Miss Virginia, a victory that certainly goes beyond mere personal achievement. It breaks ground for the future in a way Schrier must be pleased with, and will surely send a resounding message to other girls concerning the excess value society places on appearance.

Clad in a white lab coat, safety goggles and gloves, Camille Schrier mixed chemicals into beakers and created an explosion of blue and orange foam-like substances at a competition that until very recently featured bikinis rather than lab gear. https://t.co/bRTbRXXZHa

“We are no longer a pageant. Miss America will represent a new generation of female leaders focused on scholarship, social impact, talent, and empowerment” Gretchen Carlson, Chair of the Board of Trustees, said.

“We’re experiencing a cultural revolution in our country with women finding the courage to stand up and have their voices heard on many issues. Miss America is proud to evolve as an organization and join this empowerment movement.”

Ms. Schrier will now move forward to represent Virginia in the nationwide competition. Holding dual degrees in Biochemistry and Systems Biology from Virginia Tech, Schrier is a strong candidate to become the first of the ‘Miss America 2.0’ winners.

In any case, regardless of the outcome, none can deny that Schrier is an inspiration to millions.

We’re so glad to see this sort of change taking place. We wish Camille Schrier all the very best moving forward with the competition and her chosen profession.