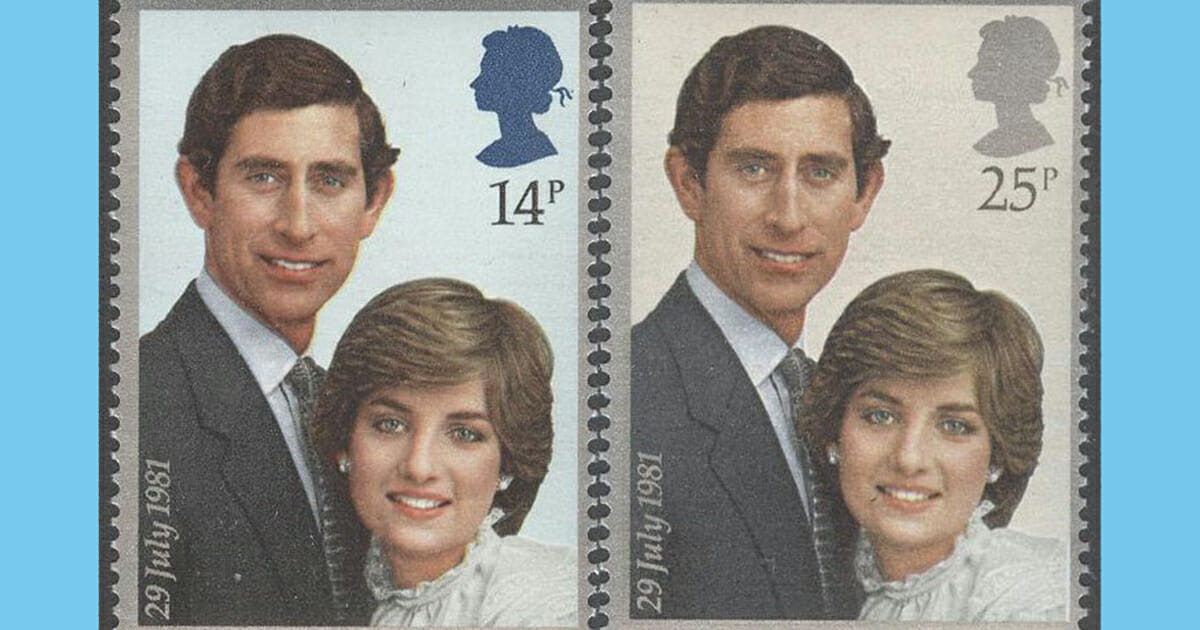 When Prince Charles and Lady Diana married, 3,500 people filled the church to watch on. The event was broadcasted to an estimated 750 million people worldwide.

It was a fairytale wedding, all told; one that exceeded expectations and left the whole of England in high spirits for a few summer days in 1981.

A multitude of photos were published from the big day and thousands of stamps were released bearing the faces of the happy couple.

In recent years, however, one such set of stamps has been the source of hot controversy online. Why? Well, because it contains one rather peculiar detail.

Despite an unhappy marriage and the untimely, tragic death of Princess Diana, many still recall the couple’s wedding day with fondness.

Even the train on Diana’s dress drew spectacular attention, in no small part due to the fact it was eight-meters long. It took Diana three and a half minutes just to make her way to the altar.

That said, there were murmurs from experts who commented on the body language of the princess, stating that it was “uncomfortable” and perhaps indicative of what was to come.

It’s a certain set of stamps designed to celebrate the royal wedding, however, that have been the subject of online debate recently.

For her wedding, Diana had handmade bridal shoes from then-renowned shoemaker Clive Shilton that were purportedly designed with a very low heel. It’s said Prince Charles stood on a box when the photos for the stamps were taken.

Is this reflected in the stamp below? Was Charles really that much taller than Diana?

They were the same height pic.twitter.com/2dPFaa9XVN

Many argue, based on the images, that the couple were of the same height.

There are photographs to support that idea, not least from the very wedding day itself.

On the day, it’s rumored that Diana herself was worried she might be taller than Prince Charles. As a result, she drafted in shoemaker Clive Shilton to design her wedding shoes.

Many have since wondered why Prince Charles is portrayed as being so much taller than Diana, with the general theory being that the royals wanted to reinforce the idea of him being a big, strong man.

In society, so often the taller, stronger man can cast an image of being a more dominant force. Critics say that the royals also wanted Diana to appear caring and supportive – a feat better achieved if she was seen to be a lot shorter than her husband.

They were the same height pic.twitter.com/I9YVAcU4hn

As early as 1981, the British press noted the significant difference in heigh and questioned the images.

In response, however, Buckingham Palace released a statement saying that Prince Charles was in fact an inch taller than Diana.

However, according to information in The Society Pages, the couple had a set of instructions to abide by every time they were photographed together. When Charles and Diana were in front of a camera, they were arranged so that he would always appear taller.

It’s difficult to forget the loveable Princess Diana. I often wonder how many stringent rules and regulations she had to adhere to in her position as Prince Charles’ wife.

At just 24-years-old, she only wanted to make her husband happy, but eventually the love was lost, the dreams broken.

What do you think about the way Princess Charles and Diana were portrayed?