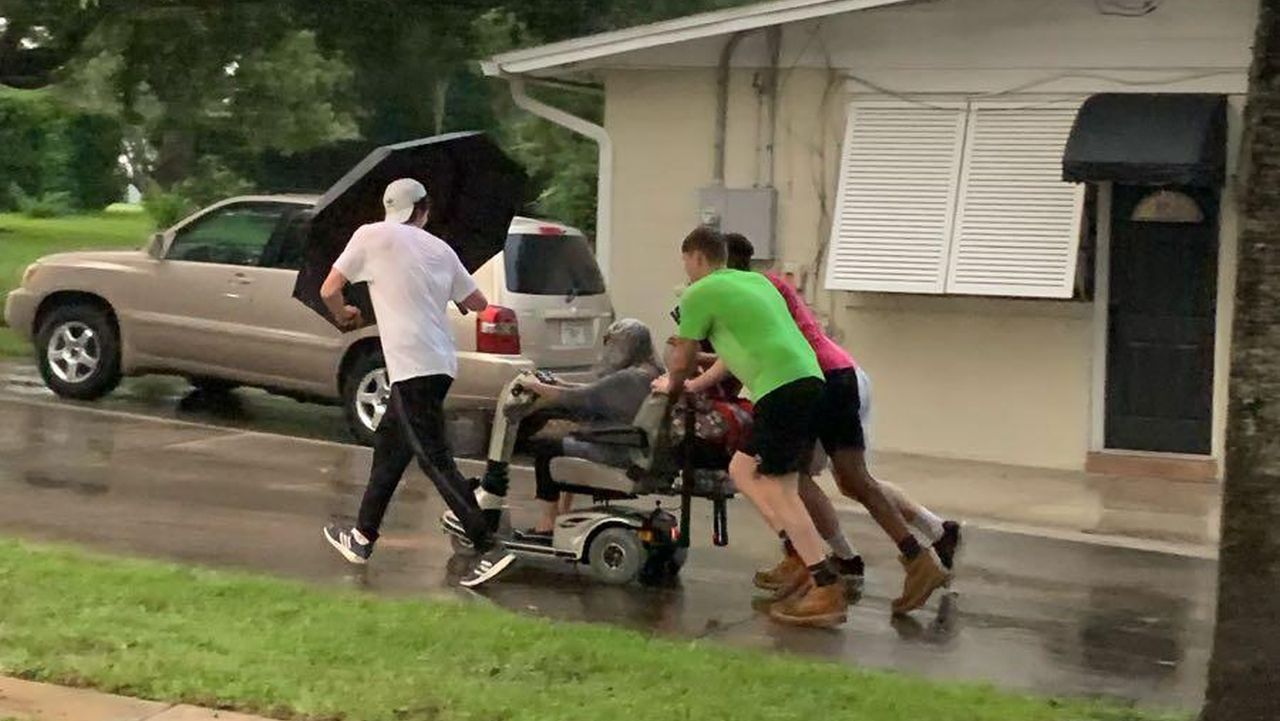 I don’t know about you, but I feel like it’s becoming increasingly easy to despair concerning where the world is and where it’s going.

These days we’re bombarded with negativity through social media, whether that be via the mainstream news pumping out their stories or simply videos and images that go viral each day.

And yet it’s through those same social channels that we see a glimpse of light every so often: a story that reminds us that hope and compassion yet exist out there.

Four young men in Seminole County, Florida have certainly done a good job of sending out that particular message this week, after they were witnessed in the act of escorting a retirement home resident back to her residence when her scooter broke down in the middle of a storm.

As per Fox News, Katty Castro, public relations representative at the Florida Living Independent Community, was on hand to snap a picture of the group pushing the old lady in question to her destination.

Katty said: “Since this is a very quiet neighborhood I was surprised to hear a commotion, laughs and four gentlemen pushing one of my lady residents under a heavy storm in Florida.

“They were pushing her up the big slope toward her residence. These heroes were so focused on helping regardless of the inclement weather and they were even covering her with an umbrella, which showed more compassion on their part.”

Katty thanked the men for their kindness, stating that she initially thought them to be teens from the high school nearby. She later learned instead that they were employees of Rebounderz Adventure Parks.

One of the quartet, JohnMorgan Massa, a corporate general manager at Rebounderz Adventure Parks, told Fox News in an interview: “[We] noticed the woman was clearly experiencing a malfunction with her mobile scooter.”

He added: “We were tired, dirty and wanted to get back to the hotel; but, knew without a doubt that regardless of our long day, it certainly wasn’t worse than the day this lady was having. She literally had a plastic bag on her head to keep her hair dry.

“We knew we couldn’t leave her in the rain, in the middle of the road, frantically trying to get her scooter to work again.”

All told, Massa and his colleagues pushed the resident three-quarter-miles until she was home.

Massa said: “We just wanted her to get home safely.

“We never expected recognition, just helping a fellow member of our community.”

“Those scooters are heavy, add the resident’s weight, her groceries and collapsing tires, the sum is a whole workout. But, I am proud of their sacrifice,” Castro added.

What a brilliant gesture! It’s stories like this that I want to see more of on social media.

If you, too, think the world needs more of this, then please share this article on Facebook so others can see it too.