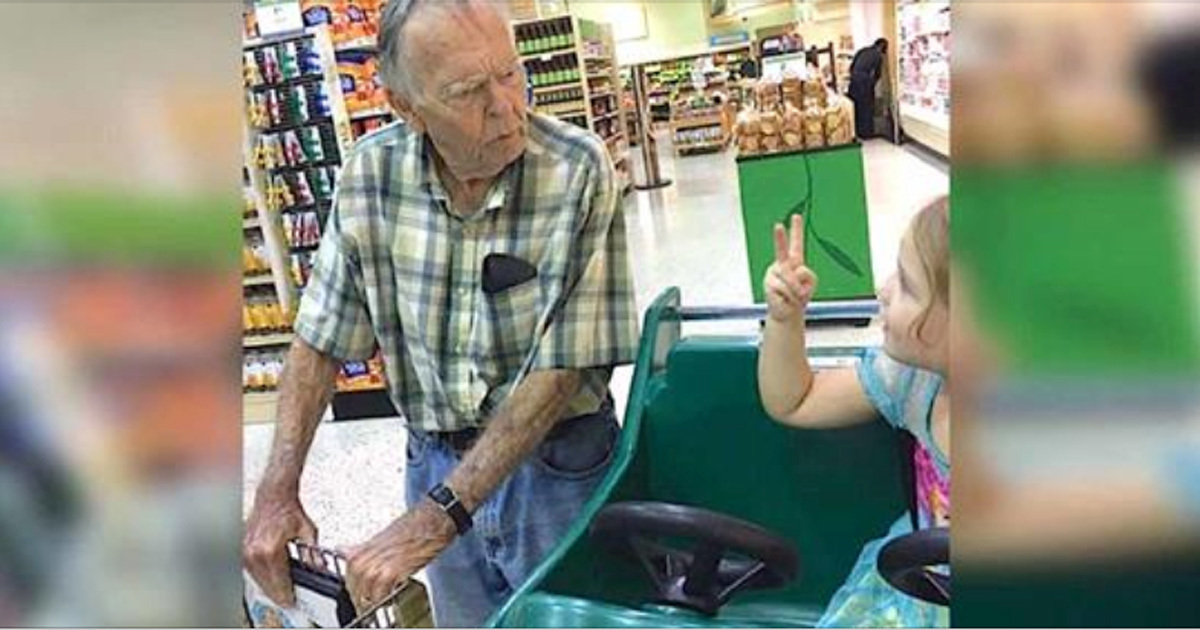 These days, we often forget about the elderly among us, which perhaps why so many old people live alone and are isolated. But just because a person turns 65 or retires doesn’t mean that they don’t have feelings or opinions.

And just because they’ve lived a long life, doesn’t mean they couldn’t use more friendship and love, too. Actually, it’s quite the opposite.

So, when we saw this story online, we just had to share it. It’s about four-year-old Norah. She called a stranger at a grocery store “old person” — and it changed both of their lives forever.

This is Tara Wood. She’s the mother of seven. When one of her children, Norah, turned four, she and Norah had a rather special experience together. Tara later felt compelled to share the story — and it went viral as soon as she posted it.

“The day before my daughter Norah’s fourth birthday, she foreshadowed a remarkable event.

I’d just picked her up from preschool when she cautioned me to mind the elderly person walking across the parking lot at a glacier’s pace.

She went on to explain that she has a soft spot for mature folks: ‘I like old peoples the best ‘cos they walk slow like I walk slow and they has soft skin like I has soft skin. They all gonna die soon so I’m gonna love ’em all up before they is died.’

Sure it got kinda weird and dark at the end there, but I liked where her heart was.

I was struck by her thoughtfulness and empathy and posted that quote as a status update on Facebook when we got home. I had no idea how much she really meant it.”

“The following day — her birthday — again on the way home from school, she asked if we could stop at the grocery store to buy celebratory cupcakes for her and her six siblings to enjoy after dinner.

How do you say ‘No’ to a birthday girl?”

“I popped Norah and her younger sister in one of those enormous and cumbersome grocery carts shaped like a car and headed toward the bakery. After we picked up the cupcakes, I stopped at a ‘Clearance’ shelf that caught my eye. While I was distracted picking up and then dismissing the bottles of almost expired Ranch dressing and cans of Ensure, Norah was busy standing up in the cart, excitedly waving and gleefully proclaiming, ‘Hi old person! It’s my birfday today!’

The man was elderly, stone-faced, and furrow-browed. However, before I could ‘Shush’ her for calling him an ‘old person’ or ask the Earth to swallow me whole, he stopped and turned to her.

If he was troubled by my no-filter-having child, he didn’t show it. His expression softened as he replied, ‘Well hello little lady! And how old are you today?’

They chatted for a few minutes, he wished her ‘Happy Birthday,’ and we went our separate ways.”

“A few minutes later, she turned to me and asked, ‘Can I take a picture with the old man for my birfday?’ It was the cutest thing ever and, although I wasn’t sure if he’d oblige, I told her we’d certainly ask.

We found the man a couple of aisles over and I approached him. ‘Excuse me, sir? This is Norah and she’d like to know if you’d take a photo with her for her birthday?’

His expression rapidly morphed from confused to stunned to delighted.

He took a step back, steadied himself on his shopping cart, and placed his free hand on his chest. ‘A photo? With me?’ he asked.

And so he did. I pulled out my iPhone and they posed together. She placed her soft hand on top of his soft hand. He wordlessly stared at her with twinkling eyes as she kept his hand in hers and studied his skinny veins and weathered knuckles. She kissed the top of his hand and then placed it on her cheek. He beamed. I asked his name and he told us to call him ‘Dan.’

We were blocking other shoppers and they didn’t care. There was magic happening in the grocery store that day and we could all feel it. Norah and Mr. Dan sure didn’t notice they were chatting away like long lost friends.”

“After a few minutes, I thanked Mr. Dan for taking the time to spend a bit of his day with us. He teared up and said, ‘No, thank YOU. This has been the best day I’ve had in a long time. You’ve made me so happy, Miss Norah.’

They hugged again and we walked away. Norah watched him until he was out of view.

I’d be lying to you if I told you I wasn’t a weepy mess after their encounter.

I was blown away by this meeting and thought maybe some of the readers on my Facebook page might enjoy hearing about it.

I posted the story and a photo of the two of them.”

“Later that night, I received a private message from a local reader who recognized Mr. Dan.

His wife, Mary, had passed away in March and he had been lonely since his beloved had gone. She wanted to let me know that she was certain his heart was touched by my little girl. That he needed it and it likely would never forget it.

I asked for his phone number and called him a few days later.”

“We made a visit to Mr. Dan’s cozy and tidy house — reminders of Mary still proudly displayed everywhere you look. He had gotten a haircut, shaved, and was wearing slacks and dress shoes. He looked ten years younger. He’d set out a child’s table, blank paper, and crayons out for Norah. He asked if she’d draw some pictures for him to display on his refrigerator. She happily agreed and went right to work.

We ended up spending nearly three hours with Mr. Dan that day. He was patient and kind with my talkative, constantly moving girl. He wiped ketchup off of her cheek and let her finish his chicken nuggets.”

“As we walked him to his front door after lunch, he pulled out a pocket knife a cut the single red rose blooming by his porch. He spent ten minutes cutting every thorn off of the stem before handing it to his new friend. She keeps that rose, now dry as a bone, in a Ziploc bag under her pillow.

Mr. Dan thinks about Norah, too. After another recent visit, he relayed that he hadn’t had an uninterrupted night’s sleep since his wife died. He told me that he has slept soundly every night since meeting my girl. ‘Norah has healed me,’ he said.

That left me speechless and my cheeks wet with tears.”

“Seventy-eight years separate these two people in age. Somehow, their hearts and souls seem to recognize each other from long ago.

Norah and I have made a promise to see Mr. Dan every week — even if it’s only for fifteen minutes, even if only for a quick hug and to drop off a cheese danish (his favorite!).

I’ve invited him to spend Thanksgiving with us. He’s part of our family now. Whether he likes it or not, he’s been absorbed into my family of nine and just like Norah said, ‘We’re gonna love him all up.’

Sometimes talking to strangers can lead to beauty full new beginnings. Give it a try.”

I think this inspiring and heartwarming story is a brilliant reminder to notice people and talk to them. Please share it with your loved ones. You never knew what a conversation with a stranger can lead to!