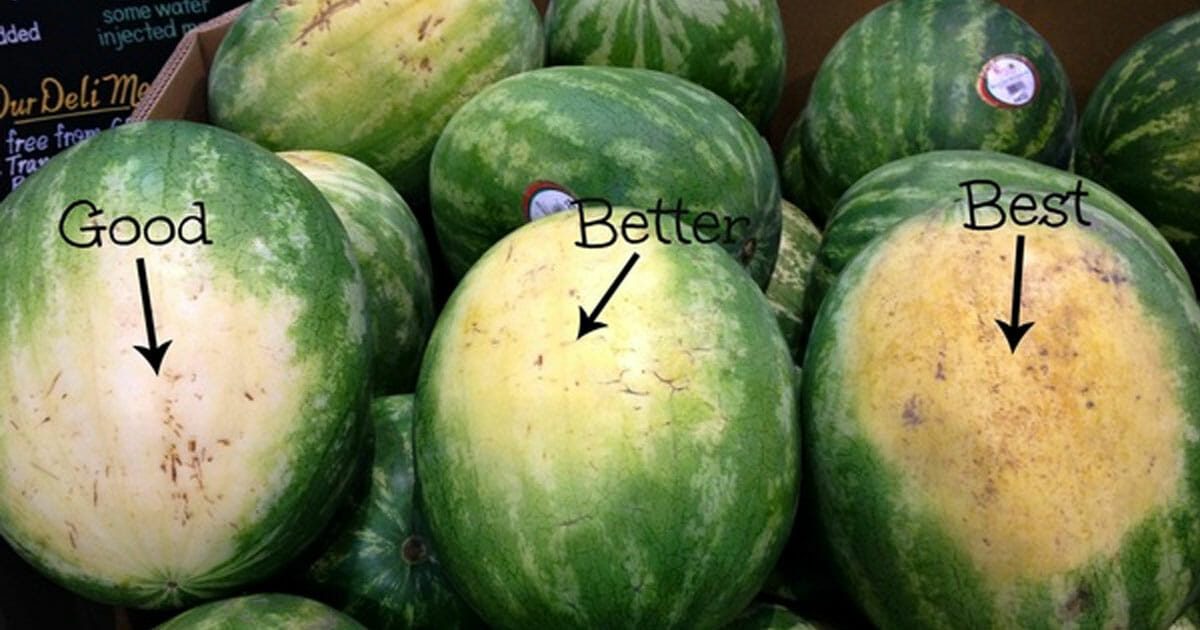 There are few things on the planet as refreshing as a juicy watermelon.

Of course, your satisfaction when eating one is only as great as the choice you make when in the store. Pick the wrong one and you’ll be left underwhelmed – trust me, I’ve done it before.

You might think that picking the right one is purely up to chance; simply up to the watermelon gods who decide who gets lucky on any given day.

Wrong. There are actually several ways to spot the perfect watermelon in a bunch, as revealed by an experienced farmer. I’m going to tell you them below … because I’m nice like that.

The first thing that jumps out when you look at watermelons is the weird white spots they have. Known as ‘field spots’, they’re actually quite natural. The white mark indicates where the watermelon rested on the ground. Every watermelon will have a field spot, but the best ones are creamy-yellow in colour, sometimes even orange-yellow. Aim for those colours if you want the best!

The so-called webbing on a watermelon can tell you the amount of times bees chanced to touch the flower. The higher the pollination level, the sweeter the watermelon is. Therefore, more webbing is good.

It’s only natural to assume that bigger is better when selecting a watermelon. I don’t know about you, but when I look through vegetables and fruits in a shop, I almost always aim to take the largest of the bunch.

In reality, the best watermelons aren’t the biggest. That’s not to say they’re the smallest either. Instead, they’re somewhere in the middle. Although it goes against almost everything you’ve ever been taught, in this instance ‘average’ is actually what you should look for.

The tail of a watermelon is a very good indicator as to its ripeness. A green tail can be indicative that a watermelon was picked to soon, and thus it won’t taste so nice. Watermelons sporting dried out tails have the best taste, so make sure you’re aiming for them.

So there you have it; 5 ways to improve your watermelon picking when you’re at the store. It’s certainly something I’m going to keep in mind moving forward!

Still not completely assured? Watch the video below for more:

Did you know about these nifty tricks when it comes to selecting watermelons? SHARE this article so all your friends on Facebook have an easier time of it. Know someone who loves melons? Tag them!