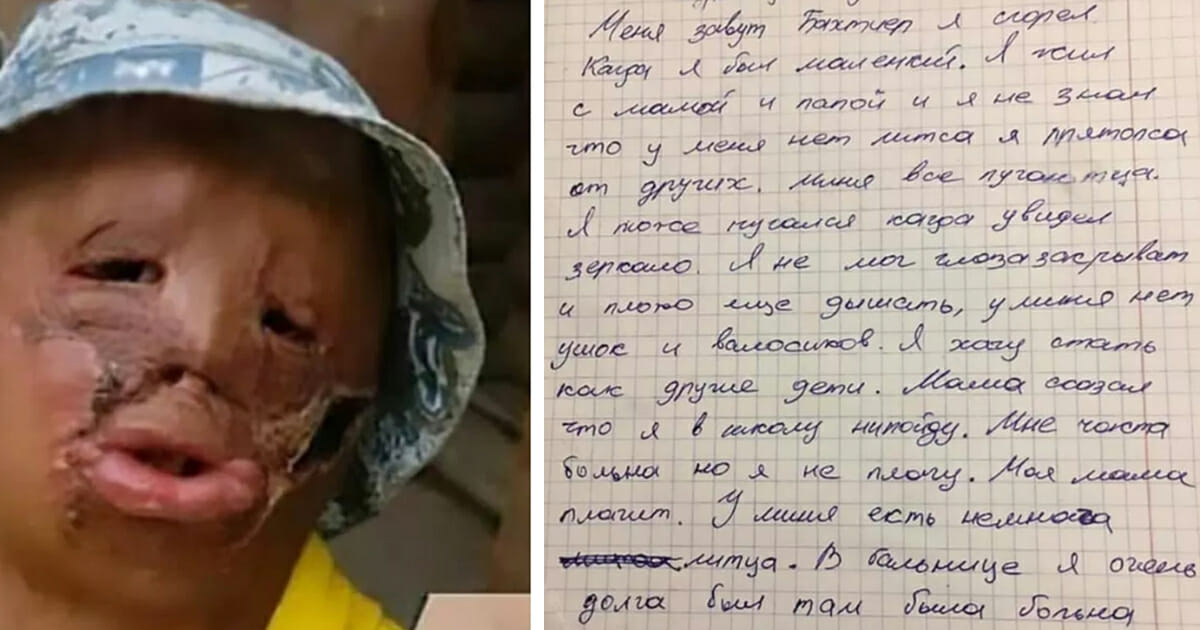 Since we’ve all been kids ourselves, we know just how cruel they can be. Standing out from the crowd at school is often enough to draw bullies in, and said bullies can often make life extremely difficult.

It’s something Bakhtiyer Sindrov of Talgar, Uzbekistan knows only too well. As per the Daily Mail, the 5-year-old suffered horrible facial burns when he was a baby, during a house fire that almost claimed his life. He was saved from the blaze, but suffered significant injuries that left him requiring major surgery.

“He was very little when his face, head, neck and shoulders got burned,” family friend Olga Ryabeva said to The Sun.

“He was basically melting alive.”

As you can imagine, life for Bakhtiyer hasn’t exactly been easy since.

As if the pain wasn’t bad enough, Bakhtiyer’s facial deformation means that he attracts attention wherever he goes. It also meant he couldn’t go to school.

In fact, as per reports, his parents resorted to covering his head with a blanket whenever he went outside, so as to allow him to move around without catching the eye of people he walks past.

Boy who was badly burned in a house fire writes heartbreaking letter to Santa asking for a new face https://t.co/4OsbO7UKUA pic.twitter.com/sX69FokKrW

Luckily, there are those trying to help. As part of a charity campaign run by the group Ya Ryadom (meaning, “I Am Beside You”), Bakhtiyer wrote a heartbreaking letter to Santa Claus detailing his one Christmas wish. His ask? A new face.

“Hello, Father Christmas! I was burned when I was a little boy.

“I lost my face in the fire and since then I have to hide from people because they are scared of me. I am scared of myself when I am looking in the mirror. I am often in pain, but I do not cry. My mother does.

“Father Christmas, give me a new face, please, I will never cry in my life then. I just want to be like other children.”

In the wake of his heartbreaking letter, Bakhityer has fortunately made some progress on getting a new face. Thanks to the incredible work of doctors at the MedIndia clinic in India, his reconstructive surgery has granted him new lips, teeth and eyelids. He’s received implants in his neck to facilitate further surgeries, whilst he’s scheduled to have another procedure in December.

Our thoughts and prayers go out to Bakhityer and all the other children of the world suffering this Christmas.

Share this article to pay tribute to one brave little boy!