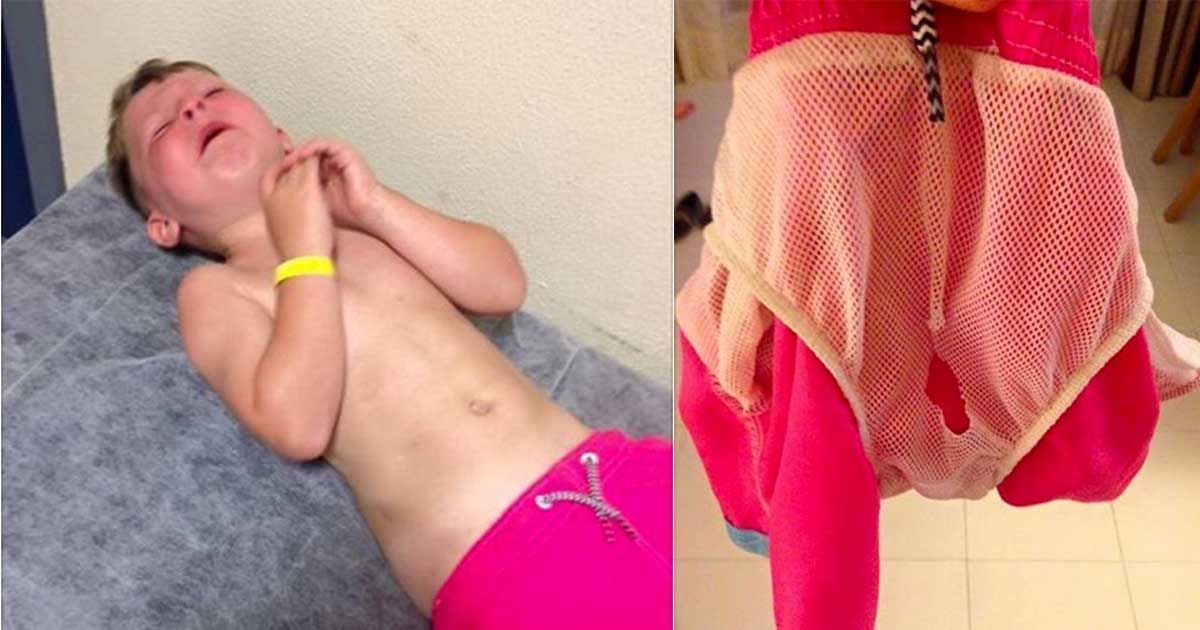 Summer time is usually kids’ favorite time of the year. There are so many outdoor activities that they can finally engage in – many of these include being in water.

Laura was on a vacation with her 5-year-old son Jack in beautiful Lanzarote, Spain. They were having the best of times in the sunshine and on the beach – her son was splashing away in the water.

Suddenly Jack started crying and Laura could see something was bothering him – a lot. When she pulled his swim shorts down she was shocked.

To Laura’s horror, the netting inside of the swim shorts had caught onto Jack’s penis and wasn’t coming off easily. Luckily Laura didn’t attempt to pull any harder – or things could have turned really ugly.

Laura asked for a pair of scissors at the front desk to try to take matters in her own hands, but when the people in the reception heard what had happened they said she needed to get the boy to a physician straight away.

He was taken to a local clinic at first, but they were unable to help him. He was then taken to a bigger hospital.

Once they got to the hospital, Jack was given anaesthetics so that the doctors could detach the little boy’s genitals from the swimwear.

After the procedure, Jack had to stay at the hospital so that the doctors could monitor him to make sure his urethra had not been damaged.

The doctors weren’t too surprised by the strange injury. Turns out just a few weeks earlier, a boy had come in with a very similar injury.

Laura is now encouraging other parents to be precautious and remove the netting inside of swim shorts so that no more kids get hurt the way her son did. ““He let out the most gut-wrenching scream I’ve ever heard; it’s a sound no mother should ever hear.” She tells The Mirror.

Jack was pretty upset for a while, but it didn’t take long before he was back to his normal happy self.

As traumatic as it was, the little boy is not shy to talk about what happened. “”He talks about how he nearly lost his willy on holiday and goes on about the naughty netting. He’s been warning all his friends as he doesn’t want the same thing to happen to them.” His mother says.

The company that manufactured the swimwear have formally apologized to Laura and her son. They are now going to investigate what might have caused the accident.