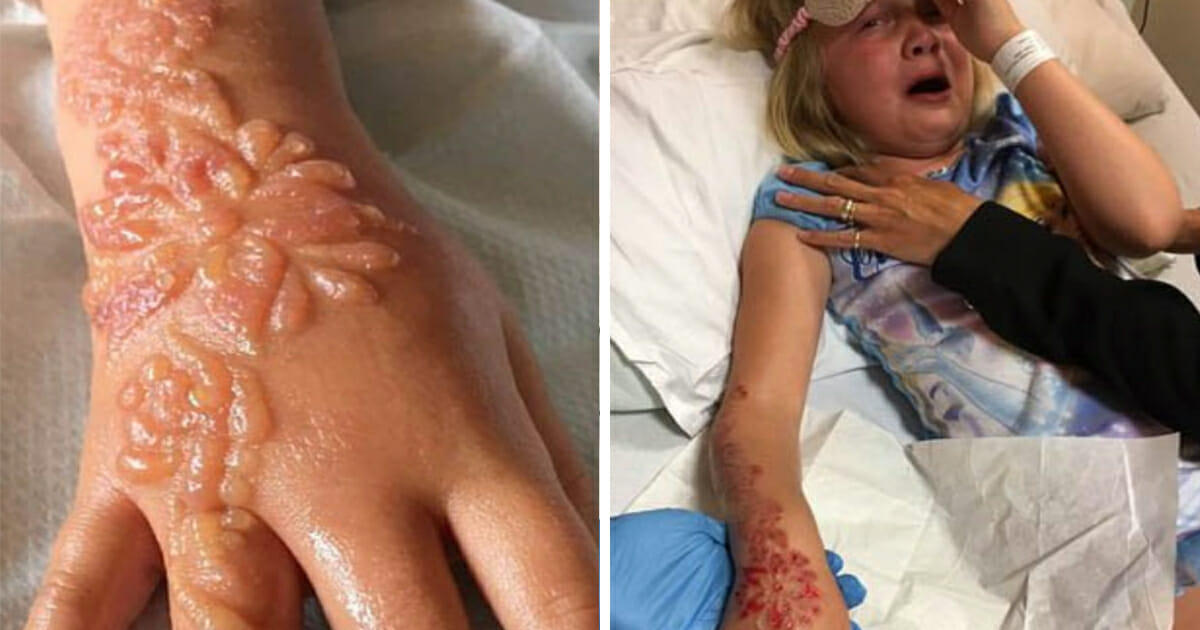 Try as we might, sometimes it’s impossible to keep our kids out of harm’s way.

That said, even when there’s absolutely nothing we can do to prevent their pain, we still feel it more so than our own.

Imagine then, how much it hurts when you, as the parent, have inadvertently caused that pain, either by accident, mistake, or simply lack of knowledge.

One father from the United Kingdom certainly knows how that feels, after allowing his young daughter to get a black henna tattoo on holiday in Egypt. The girl in question, aged just 7, may now be scarred for the rest of her life.

Things started when the mother of the family, 43-year-old Sylvia Gulliver, was rushed to hospital with a gaul bladder infection. She spent two days in an Egyptian hospital, but her young children were on their best behavior.

As a way of rewarding them, their father, Martins, told the children they could have a treat. 7-year-old Madison chose to get a black henna tattoo like the ones she’d seen on other tourists about town.

She got permission from her dad and thereafter had her hands tattooed at the hotel where the family was staying. Her brother, 9-year-old Sebastian, got a henna too, though he washed his off after experiencing irritation.

Madison kept hers, only to begin to feel it itching upon the family’s return to the UK.

It wasn’t long before the situation drastically deteriorated. The itch became a series of painful blisters, brought on by a chemical within the tattoo ink called paraphenylenediamine (PPD).

Things got so bad that Madison had to be taken to a specialist burns unit in hospital. She’s been left with scars that could remain for life.

“She is potentially scarred for life after getting a black henna tattoo,” said Martins, as per the Daily Mail.

“The tattoo was done in the hotel’s salon and they claim it’s not the henna and that it’s my daughter’s skin. She has blisters from her finger to her elbow and is in so much pain. We were entirely unaware of the dangers and I think they should warn of this in the brochures.

“I think it’s partly my fault because I didn’t know about it, but also the fault of the salon because they are using dangerous chemicals on children. We would have thought that the travel agents would have had concerns about this.

“We want to get the message out to other people.”

Madison was referred to a scar management unit and will have to wear a pressure bandage for a minimum of six months to limit the damage.

I certainly didn’t know henna tattoos could be this dangerous. I’ve seen many of them on my own holidays, and wouldn’t have considered it possible they could cause such injuries as seen in the pictures above.

Let’s help Sylvia and Martins get their message out by sharing this article. You never know, you could save someone a great deal of pain and trouble.