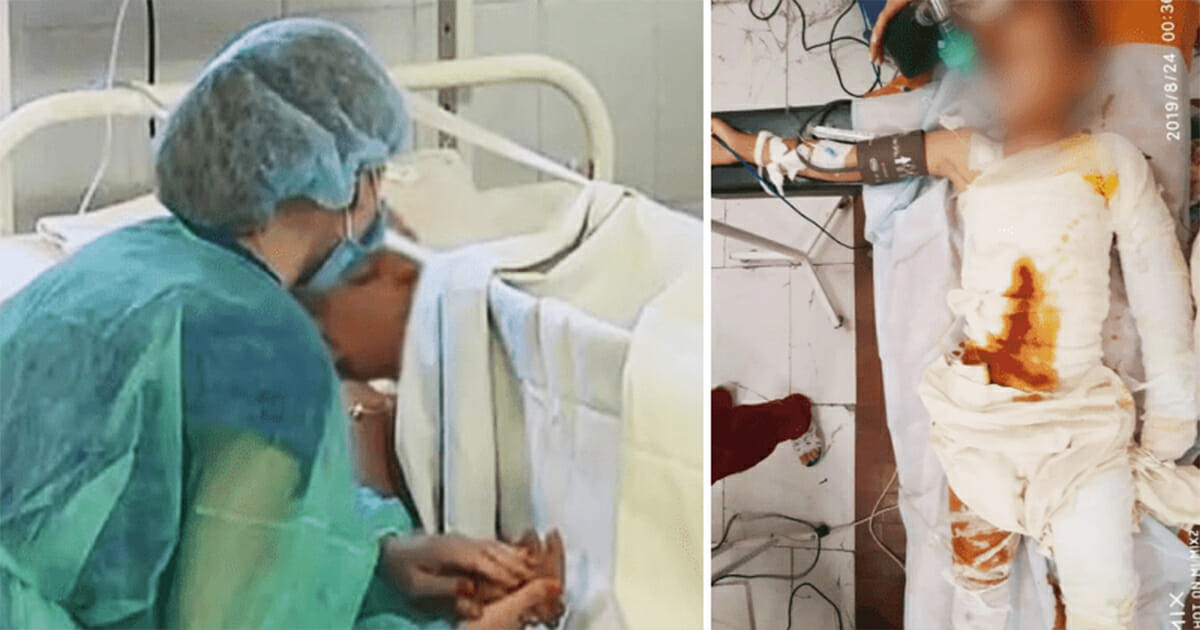 Bullying amongst kids is nothing new.

Since the dawn of time children have been establishing pecking orders as they find their feet in the world. As adults, it’s our job to ensure they’re taught right from wrong, and that they’re made aware in no uncertain terms that bullying is not acceptable in any form.

Even so, the vast majority of us will have had an encounter with a bully at some point in our lives. Usually said bullies grow out of this phase, but sometimes they don’t. Sometimes, they go so far into the realms of cruelty that there is no way back, and the consequences of their actions evolve from being a steep learning curve to a need for serious punishment.

A schoolboy in the Ukraine has been left fighting for his life after bullies doused him in petrol and set him on fire. Now, 8-year-old Kyrylo Yatsun needs all our prayers.

Boy, 8, fights for life after bullies cover him in petrol and set him alight

According to the Daily Mail, Kyrylo was playing in a courtyard near his apartment block when he was viciously set upon by bullies. The boy’s mother, Eugenia Yatsun, said the bullies had no motivation to attack her son, describing them as “monsters”.

It’s said these bullies poured petrol on Kyrylo’s T-shirt and used a lighter to set it on fire. Kyrylo fell down screaming while his tormenters watched and laughed. They then fled the scene when passersby rushed to Kyrylo’s side and ripped the burning T-shirt off.

Kyrylo, having suffered grave injuries, was rushed to Dnipro Regional Children’s Hospital. Doctors performed multiple surgeries to give him a fighting chance of survival, removing damaged skin from his head, arms, torso and hips.

Dr. Artem Posunko, from Dnipro Regional Children’s Hospital, said: “The boy was hospitalized in a grave condition with severe burns to 35 percent of his body.”

Hospital authorities have since confirmed that Kyrylo will have to undergo a series of skin grafts to combat the number of burns he’s suffered.

Doctors have also warned that little Kyrylo isn’t yet out of he woods with regards to his injuries. He remains in critical condition.

“We do everything possible to keep him alive. He is conscious and can speak but his injuries are very serious and his condition is still life-threatening,” said Dr. Posunko.

Mom Eugenia, who hasn’t left her son’s side, told local media about the incident, stating: “I was cooking lunch at home when some children rushed in and said that Kyrylo was injured. I ran outside and saw my son lying on the ground. The skin on his belly and legs was badly burned. He told me that they did it to him on purpose without any reason. They are not children, they are monsters.”

As per reports, law enforcement agencies have apprehended those thought to be responsible for the attack. The bullies claim they set Kyrylo alight by accident, though detectives are actively working the case.

I simply can’t believe the depths of depravity some human beings will sink to. Children will be children, but this is far beyond anything that is remotely understandable, far less reasonable.

We’re sending all our prayers in the direction of Kyrylo Yatsun, and wish him well with his recovery.

Share this article to offer your prayers for this brave little boy.