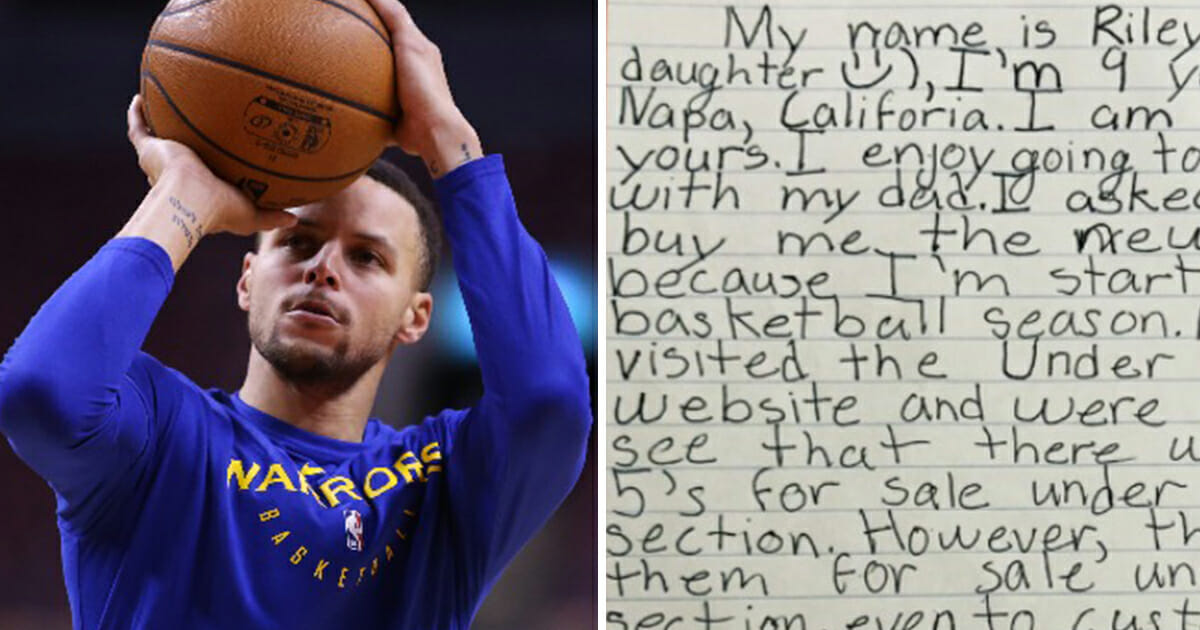 It doesn’t matter how rich, famous, or influential you are, what speaks most about your character is how you treat others.

When it comes to making a brilliant impression, Stephen Curry certainly knows a thing or two about how to win over doubters, that’s for sure. He recently received a letter from a 9-year-old girl, one calling him out on not offering his sneaker line in girls’ sizes as well as boys.

Given how busy the NBA star is – and the fact he must receive thousands of messages every single day – he would have been forgiven for not replying. As it was, however, he not only took the time to respond, but did so in a manner which is warming hearts everywhere …

@EmmaWatson Hi Emma, I know you are a big advocate for women. I was hoping you could retweet my daughter’s letter to @StephenCurry30 . This is her small way of making a difference and speaking up for women. You are a role model for her. We both would be very thankful. pic.twitter.com/mYNRtPMXP0

“My name is Riley (just like your daughter), I’m 9 years old from Napa, California. I am a big fan of yours,” the letter from the young girl reads.

She goes on to explain that her and her dad frequently attend Warriors games, and love watching Curry in action.

“My dad and I visited the Under Armour website and were disappointed to see that there were no Curry 5’s for sale under the girls section,” she continues.

“I know you support girl athletes because you have two daughters and you host an all girls basketball camp. I hope you can work with Under Armour to change this because girls want to rock the Curry 5’s too.”

Thanks to the unwavering power of the internet, it wasn’t long before Riley’s letter had made its way to Curry himself. Rather than simply ignore it, or even leave it to one of his team, the Golden State Warriors star took the time to respond personally.

Offering his apologies, he tweeted:

Appreciate you helping us get better Riley! We got you. #MoreToCome pic.twitter.com/UBoTklvwhg

“I appreciate your concern and have spent the last 2 days talking to Under Armour about how we can fix the issue,” he wrote.

“Unfortunately, we have labeled smaller sizes as ‘boys’ on the website. We are correcting this now!”

What’s more, Curry went on to offer the girl her very own pair of sneakers, as well as a special surprise that he has in store for her on International Women’s Day.

“I want to make sure you can wear my kicks proudly — so I am going to send you a pair of Curry 5’s now AND you’ll be one of the first kids to get the Curry 6. Lastly, we have something in the works for International Women’s Day on March 8th, and I want you to celebrate with me!”

Not only that, but reports claim Curry wasn’t exaggerating when he said he’d get on it right away. The Under Armour website already has the shoes in question in the girls’ section, too.

Sure enough, shoe is now found under "Girls" section, too. ? pic.twitter.com/WDMM2tcnW3

It might seem like a fairly simple gesture, but to Riley it no doubt made her year!

If you thought this was a nice thing for Stephen Curry to do, share this article on Facebook with your friends and family.