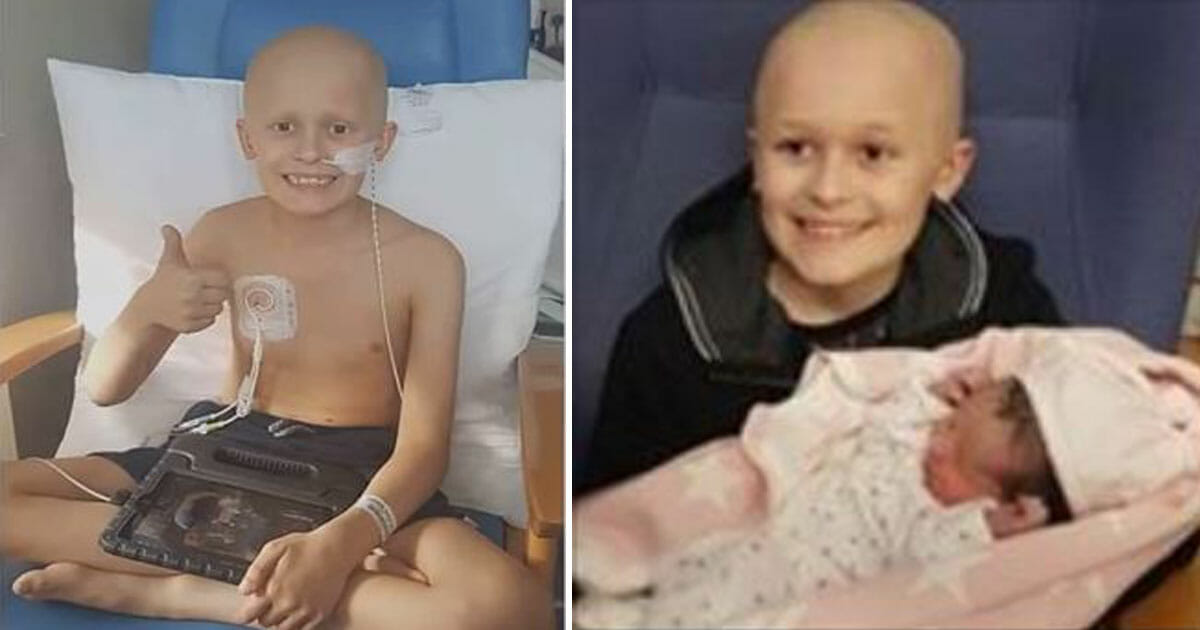 No parent wants to see their child suffer, and they’ll do everything in their power to make them feel good again. But sadly, not every parent can do this.

No matter how much we try, hope and pray, there are some things that are just out of our hands.

Bailey began to feel unwell in the summer of 2016, and his parents took him straight to the doctor. At first, the doctor thought Bailey was suffering from a common cold and sent him home.

But Bailey felt worse and worse, and in the end his parents, Lee and Rachel, received a diagnosis that no parent wants to hear.

Their 8 year old son had Non-Hodgkin lymphoma, a form of cancer characterized by uncontrolled growth in the lymphatic tissue.

His treatment began immediately, and after both chemotherapy and radiation, it appeared in February 2017 that the cancer was defeated and that Bailey would survive.

“They thought there were no more signs of the cancer,” dad Lee tells The Bristol Post. Bailey recovered quickly and could even go to school again, although he was forced to go to regular hospital check-ups to ensure that the cancer hadn’t returned.

Sadly, it didn’t take long until the cancer was back, and around Easter last year Bailey was back in the hospital again.

He started a new round of treatments, and was given a 70 percent chance of recovering. But the treatment was tough on his tiny body.

In July he was feeling well enough to leave the hospital again and stay home over the summer. But the cancer didn’t give up, and at the end of August, Bailey was back at the hospital. This time the cancer was worse than ever before.

RIP young man. You were so brave https://t.co/3f8VNMsvWl

He now had stage 4 cancer which had spread to his liver, lungs, and stomach.

The doctor said he only had weeks to live, maybe even days.

But Bailey had a goal: He was going to fight until his little sister was born at the end of November.

And Bailey fought. Those three months were terrible. Although Bailey was constantly deteriorating, the family tried to make his last days fun and memorable.

Bailey was on strong painkillers and was rapidly deteriorating.

When his little sister arrived, he decided that she should be called Millie.

Bailey did everything a big brother does: he hugged his sister, changed her diapers, gave her baths and sang to her. But after Millie arrived, things quickly got worse for Bailey.

According to his diagnosis he shouldn’t have survived long enough to see his sister born. And as soon as he had met her, it became obvious that he didn’t have long left.

On Friday December 22 Bailey was in a hospice.

By Christmas eve the family knew that the end was near and said:

“The moment we said ‘stop’, he took his last breath and had just the one tear come out of his eye. It was peaceful.”

Just before Bailey was taken to the hospice he said something incredibly moving about his baby sister, the family tells The Bristol Post.

“I want to stay but it’s my time to go, to become her guardian angel.”

Bailey was taken from his family far too soon and he will be missed forever.

Losing a loved one is the worst feeling in the world. But we should never forget that they are always in our hearts.

Share this moving story with your nearest and dearest on Facebook to show everyone who is missing someone that they are never alone!