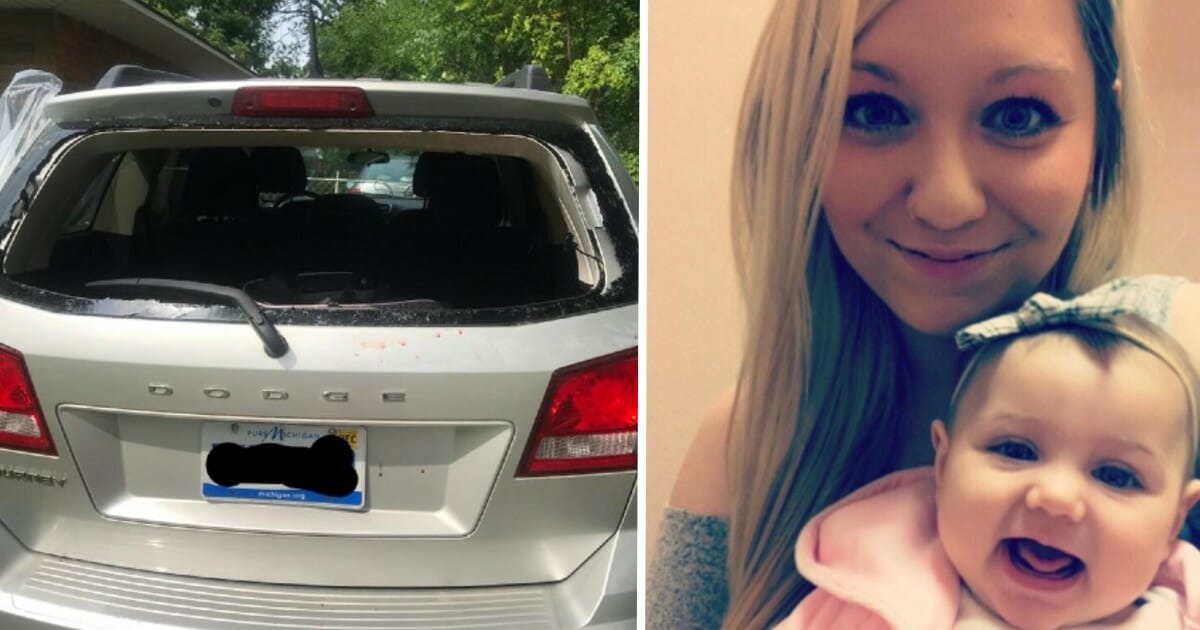 What number are you supposed to dial when you find yourself in an emergency situation?

When Lacey Guyton accidentally locked her two-month-old daughter in the car on a hot day she had her grandmother call the police for help. After all, it was an emergency. But the dispatcher’s response shocked her.

The frantic women were told to contact a tow company.

On August 18, 2018, she was visiting her grandmother in Waterford, Michigan when her two-month-old, Raina, was accidentally locked in a car.

“It was terrifying. It was like the worst day of my life,” she told WJBK in August 2018.

She had her grandmother call 911 ‘immediately.’

As Lacey’s grandmother, Mary Riley, called 911, Lacey took a “huge chunk of asphalt” from the ground and began to smash it into her car window, but the window didn’t break. Her grandfather gave her a tool to break car windows, but Lacey didn’t have any luck with that either.

While Lacey frantically tried to break into her car, Mary spoke with a 911 dispatcher. She told the dispatcher the issue and the person on the other end replied, “We don’t unlock cars unfortunately.”

Mary said she felt “helpless” after she was told the police don’t break into cars and the only help they could offer was calling a tow company.

There was no time to call a tow company.

“I’m like, grandma, we don’t have time to call a tow company,” Lacey said. “Like I don’t know how many minutes I have, until she’s passing out.”

This time Lacey called 911 and she reached the same dispatcher. She relayed the same information and was told the same thing–they don’t send anyone to break into cars.

The dispatcher transferred the worried mother to a tow company. Lacey requested a tow truck, but knew she had to take action or else Raina might not make it.

“I checked on Raina again real quick and saw she stopped crying and was starting to close her eyes and at this point I didn’t know if she was going to sleep or if my baby was dying,” she wrote on Facebook. “Realizing no emergency help is coming to save my baby was the worst feeling in the world.”

Thankfully, after hitting her car’s rear windshield two times it shattered and she was able to crawl into her car and get Raina.

“She was really sweaty, screaming, and just drenched in sweat,” Lacey said. “She was probably in there like 10 minutes, so we immediately got her out, got her inside, cooled her down.”

The tow truck didn’t arrive until more than 10 minutes after Lacey rescued Raina from the hot car.

Police apologized for the lack of response.

The police chief apologized to Lacey and assured her that the veteran 911 dispatcher who failed to offer assistance would receive more training.

“It’s a common sense issue,” Chief Scott Underwood said. “You call 911, you expect for somebody to come and give you some help, and we certainly should have gone and done that. We made a mistake and we need to fix that.”

But Lacey, who appreciated the apology, didn’t believe it was an issue of training.

“No one should need any training at all to know that you need to send help in that situation,” she wrote.

Now, she wants others to know that if they’re ever in a similar situation you should attempt to break the rear windshield.

And to think you call 911 for help during an emergency, but they won’t come to help when a child is locked in a hot car.

The police chief apologized, but is that enough?

Let us know in the comments.