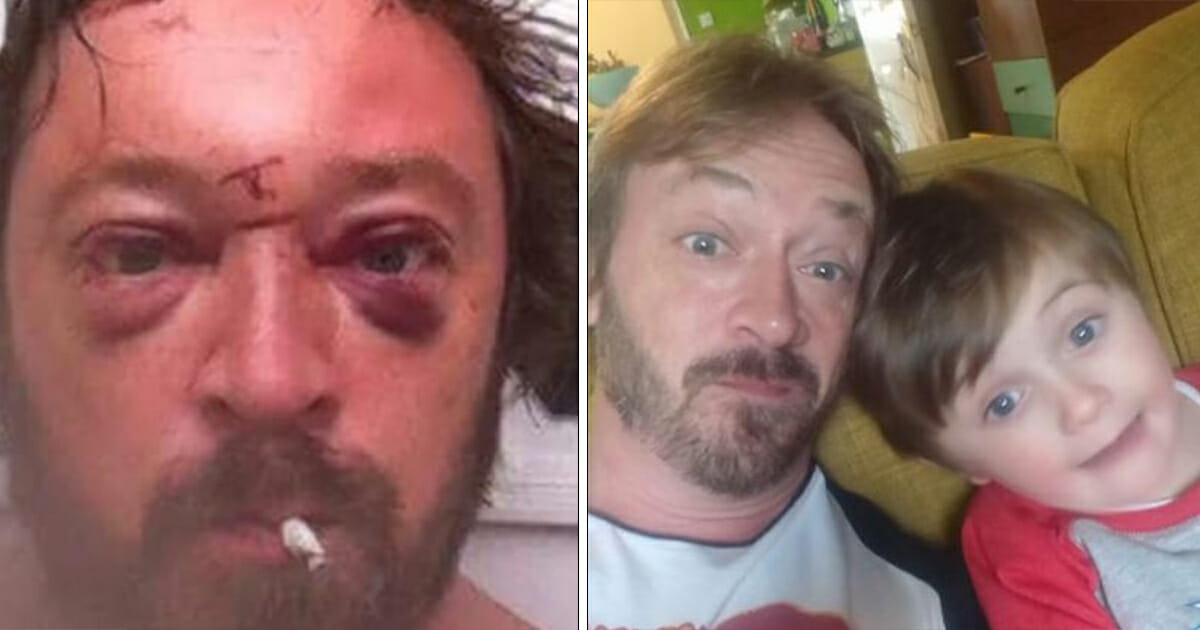 We all like to see people change for the better, to tackle their demons head on and grow out of whatever problems may have weighed them down.

Of course, it’s rarely so simple as it looks. Often people can be fighting battles that affect their entire lives, and winning free from the shackles is a long and arduous process.

Which is why it’s worth celebrating when someone manages to come out the other side.

47-year-old Gene Davis is one of these people. The former alcoholic dad, who at one point was drinking a bottle and a half of whiskey every day, has opened up about how seeing an image of himself served as a catalyst for change.

As per reports, Davis battled his alcoholism for decades. His drinking cost him multiple jobs, as well as relationships and a marriage.

Until the day a selfie was snapped when he was hospitalized after falling from his bunk bed. Seeing the picture in its candid clarity bought the situation home in a way nothing else had.

Gene’s accident occurred while he was staying in the spare room of one of his friends, having been asked to leave his family home on account of his drinking.

He explained: “I was given the spare room, which had a bunk bed in it, and I must have sunk into a heavy sleep.

“But when I awoke in the night needing a pee I quite forgot I was six foot up and dropped like a stone to the floor, taking out a chest of drawers with my head on the way down.

“I wasn’t knocked out – the drawers were totalled, mind – and staggered to the bathroom to see the mess I’d made of myself and whether or not I could get away with just wrapping it in a tea towel and going back to bed.

“But, when I saw the blood, lifted up my hair and a big flap of skin came with it, I realised I’d partially scalped myself and could actually see my skull. I remember thinking, ‘Nope, it’s the hospital for you, pal’.”

Gene first began his relationship with alcohol as a young teenager playing in a band. He was later thrown out of university for not attending classes and dismissed from a series of odd jobs.

“The lowest point probably came one New Year’s Eve, when me and the rest of the band I was in at the time went to this pub run by an Irish guy we knew,” he said.

“While we were in there someone spilled their beer and I decided to take a straw, get down on my knees and suck the remnants of it from the dirtiest, mankiest pub carpet you’ve every seen.

“And this was despite already having a full pint waiting for me on the bar. Isn’t that the most disgusting thing you’ve ever heard?”

Out the other side

Fast forward to today and Gene is 18 months clean after the accident involving the bed. His focus is now solely on his son, Joe.

He said: “I’ve not touched a drop since – that was 18 months ago, I now work washing pots and preparing veg in a local Indian restaurant – basic stuff but there’s no stress, just the way I like it. Now Joe is my rock and my number one fan and he helps me keep it together.

“As for all those lost years? I’m a bit ‘Edith Piaf’ about it all – ‘I regret nothing’ and all that – because, had I not gone down that route I wouldn’t have ended up meeting Vick, with whom I’m still friends, and I wouldn’t have had my boy.

“Now it’s all about focusing on him and being a good dad. It’s been a long time since I felt like myself again, and I’m loving it.”

Way to go, Gene! We’re glad you’re winning the war against your demons and can only hope you continue on your current path.