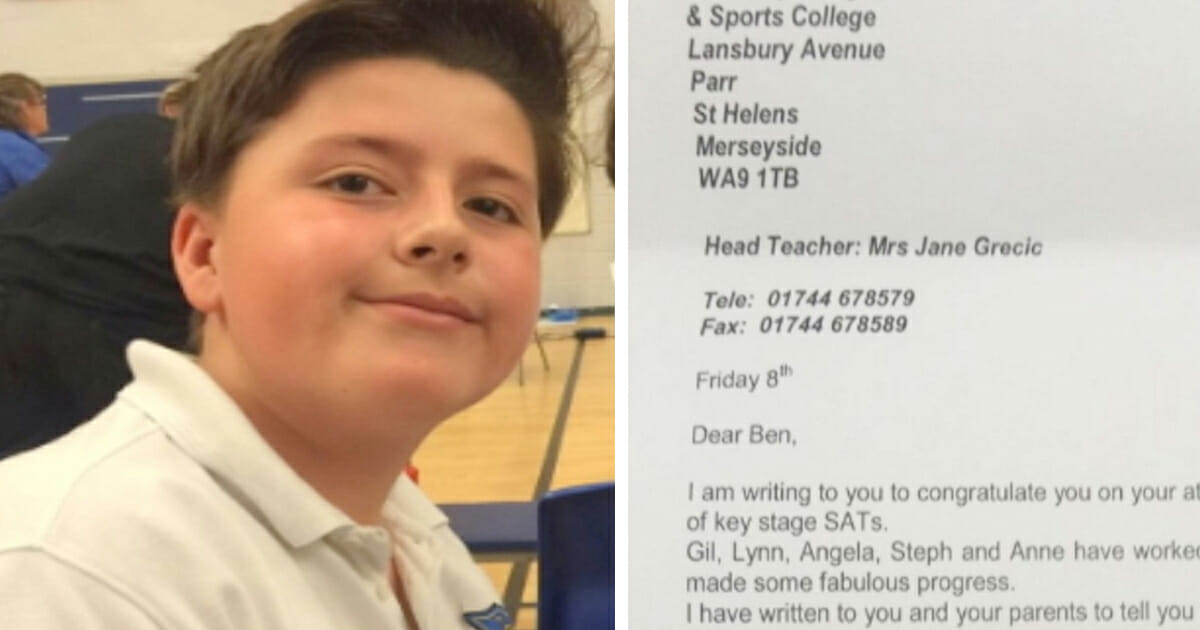 What’s more, in addition to the worries of the parents, the children themselves can sometimes struggle in high-pressure social environments. There is no better example of this than school, where grades play a major role in your progress.

11-year-old Ben Twist lives with autism, and his mom Gail was handed a huge surprise when her son’s school sent a letter home after he failed his SAT tests …

Raising a child with learning difficulties isn’t any less rewarding than raising one without them, but it can be said that it’s a great deal tougher.

Whilst parents of children without learning difficulties undoubtedly fret over all the usual things a mother or father does, those parents whose children are born with conditions such as autism have all those concerns and more.

When Gail received a letter from Ben’s school, she would have been forgiven for expecting it to say something about how he needed to work harder or improve his grades. Instead, the letter contained nothing of the sort.

The innovative thinkers at Lansbury Bridge School and Sports College, in St. Helens, Merseyside instead gave Ben a boost of confidence. Despite the fact he’d failed his SAT tests, his teacher recognized that what he needed was support, not condemnation.

Mrs. Clarkson sent him home with a touching letter that let him know just how skilled he is, and what exactly he brings to the table.

I am writing you to congratulate you on your attitude and success in completing your end of key stage SATs.

Gil, Lynn, Angela, Steph and Anne have worked so well with you this year and you have made some fabulous progress.

I have written to you and your parents to tell you the results of the tests.

A very important piece of information I want you to understand is that these tests only measure a little bit of you and your abilities. They are important and you have done so well, but Ben Twist is made up of many other skills and talents that we at Lansbury Bridge see and measure in other ways.”

Upon reading the letter, Ben’s mom Gail found herself tearing up.

Mrs. Clarkson’s letter went on to list the things Ben was good at, things that a usual school test can’t measure.

We are so pleased that all of these different talents and abilities make you the special person you are and these are all of the things we measure to reassure us that you are always making progress and continuing to develop as a lovely, bright young man.

Well done Ben, we are very proud of you.

The world needs more teacher’s like Mrs. Clarkson! It would have been all too easy for her to send a standard letter telling Ben’s mom that he needed to improve or change in some way. She didn’t though, because she realizes that judging a fish on its ability to climb a tree is as pointless as judging a monkey on its ability to swim in deep waters.

We hope that Ben takes his teacher’s words to heart and uses them to remember that his value should never be measured by the results of a school test.