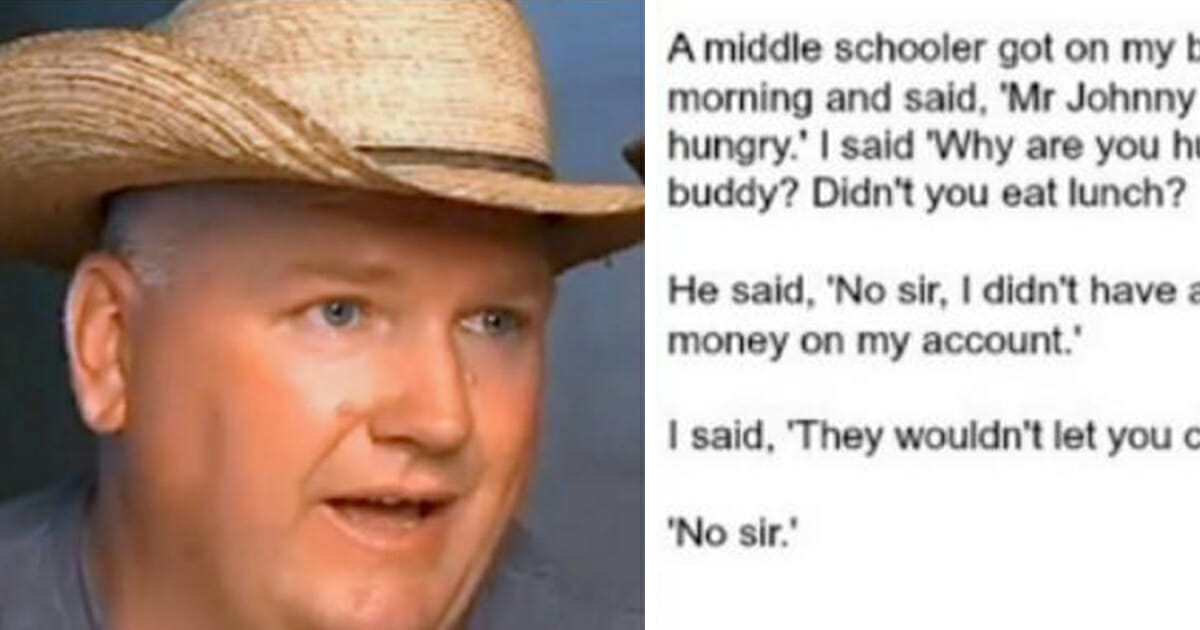 Let no man say Johnny Cook, of Georgia, hasn’t got a heart of gold.

Cook works as a horse trainer now, but before that – and before being terminated by Haralson County Middle School – he was a school bus driver as well, charged with taking students safely to and from school.

He liked his job, and would probably still be doing it now were it not for the events of one fateful day in 2013.

A student had boarded his bus and complained that he was hungry. Cook, of course, questioned whether he’d eaten his lunch, only to be told that the school had refused him food because he didn’t have 40 cents to pay for it.

Cook was horrified. Later that night, he took to social media to vent his frustrations, unaware of the chain of events it would throw into motion …

In his post on Facebook, Cook told the little boy’s story to his friends and family. Not only that, but he also issued a plea to those in charge of the school to change the lunch plan.

“Huh! What! This child is already on reduced lunch and we can’t let him eat. Are you kidding me? I’m certian there was leftover food thrown away today. But kids were turned away because they didn’t have .40 on there account .” the post reads.

Cook’s post quickly went viral, with hundreds of people liking and sharing it to get the message out. A by-product of its popularity, however, meant that the school’s superintendent caught wind of it quickly. The very next day Cook was called into a meeting, one where he claims he was offered a stark ultimatum: apologize for the story and say it was a lie, or face termination from his job.

For Cook the choice was a no-brainer. He accepted the termination, but explains: “I felt like, in my heart of hearts, the kid was telling me the truth. Whether he was, whether he wasn’t, I believed him, so I wasn’t going to recant the story.”

The school’s superintendent, meanwhile, argues that the incident never happened, stating that the school have incriminating security footage proving that the child in question wasn’t in the lunch line that day.

Furthermore, he said that the boy would have been given a bagged lunch if he didn’t have money in his account, and defended his decision regarding Cook by way of saying the bus driver was in breach of the school’s Facebook policy.

To see both sides of the argument, watch the video below:

It certainly makes for an interesting debate! In any case, we still think it’s harsh that Johnny be removed from his position.

Do you think Cook should have been fired for exposing the truth? Let us know in the comments box below.

Hopefully, his viral post will at least get people talking about issue and *I really hope that it help make sure that no student ever has to go a full day at school without any sort of lunch.

No child should go starving and without food at school! If you agree, please share this article on Facebook!