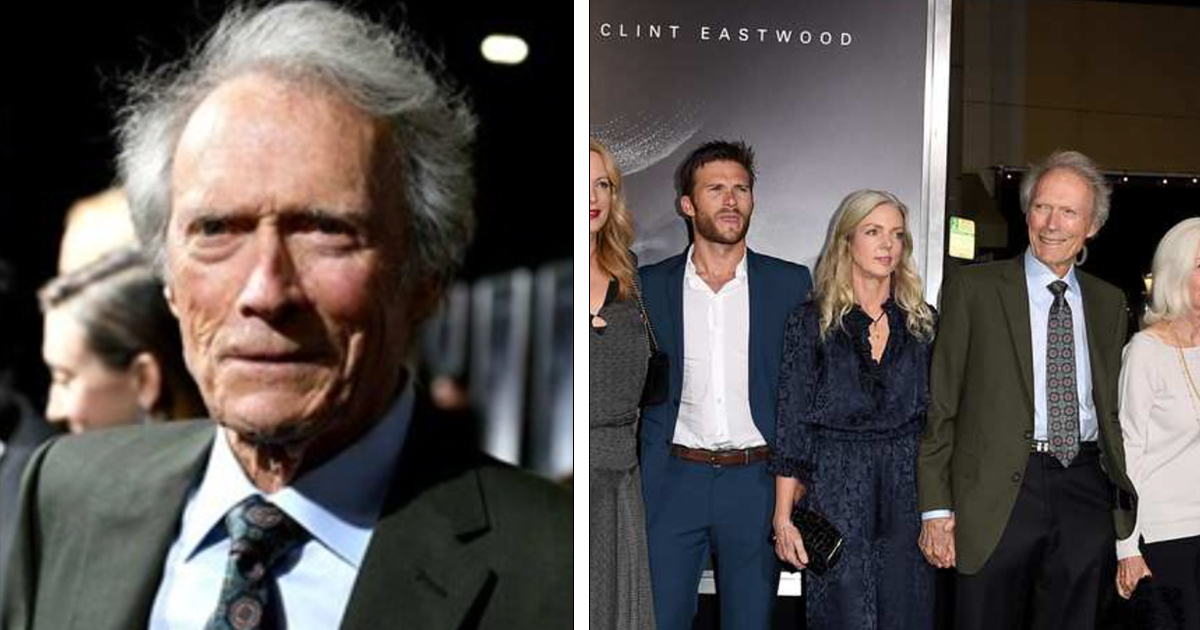 Clint Eastwood is an American icon and a generation-defining talent. As such, one would expect that the world knows all there is to know about this hero of Hollywood.

Given that Clint’s been in the spotlight since the mid-’50s, there’s been no end of rumours and speculation surrounding his private life. Stories, television interviews, gossip … blah, blah. You name it, and it’s probably been said of Eastwood.

Which is probably why such a stir was caused when Clint appeared at the premiere of his 2018 movie The Mule. The then-88-year-old star was snapped with all of his children, which under normal circumstances wouldn’t be much to write home about.

Only, on this occasion there was something different, something more, that caught the eye of onlookers. In the images that soon surfaced on Instagram, Clint was pictured with his usual brood of seven children, as well as an extra!

But who was this eighth child? And how did Clint Eastwood keep her secret for so long? Needless to say, the rumour-mill went into overdrive.

To say that Clint Eastwood has been successful in his career is perhaps the understatement of the century. Born in San Fransisco on May 31, 1930, Eastwood was nicknamed “Samson” by the hospital nurses due to the fact he weighed a whopping 11 pounds 6 ounces at birth.

By all accounts, Clint had a rather unremarkable childhood. He was held back at year at Piedmont Middle School for poor academic scores. Indeed, the remainder of his school life was certainly nothing to boast about, with one high school friend, Don Loomis, having stated:

“I don’t think he was spending that much time at school because he was having a pretty good time elsewhere.”

As a young man, Clint held down a number of jobs, switching from lifeguard to paper carrier to grocery clerk to forest firefighter and golf caddy.

Records state that he was drafted in the United States Army during the Korean War, but accounts from people close to him relay that he spent the entirety of his service as a lifeguard at Fort Ord in northern California.

And yet it was at Ford Ord where Eastwood was first spotted with regards to the career where in he would eventually rise to be a superstar. The Universal-International film company was shooting in Fort Ord when an assistant is said to have spotted Eastwood and asked him to meet the director of Rawhide.

One thing led to another, before Eastwood eventually auditioned for Arthur Lubin, who was impressed by his physique but didn’t think he was a good enough actor.

Lubin went on to suggest Eastwood take acting lessons and arranged for him to be handed a contract in April of 1954 worth $100 a week.

A host of unsuccessful auditions followed, before Clint landed a minor role in Revenge of the Creature (1955), a sequel to Creature from the Black Lagoon.

The Rise to Fame

Eastwood’s first official role might not have been anything to set the history books on fire, but it did give him a foot in the door. Little did people know that this would be turn out to be the beginning of a career that would span several generations!

The following few years saw Eastwood cast in plenty of roles, but none that would propel him to the next level.

Then, in 1958, Clint was cast as Rowdy Yates in the CBS western series Rawhide, providing him with the career breakthrough he had long sought.

After just three weeks, Rawhide reached the top 20 in TV ratings and ended up being a success. It wasn’t until 1963 that the series’ popularity began to wane, but by this time Clint had established a reputation for himself.

Late ’63 would once again prove to be a hallmark point in Clint’s career. He agreed to feature in a western movie shot by a little-known director by the name of Sergio Leone. The film was named A Fistful of Dollars.

The rest, as they say, is history. A Fistful of Dollars is credited with changing the way Spaghetti Westerns were made, and Clint appeared again in the sequel For a Few Dollars More and the film that rounded off the trilogy, The Good, the Bad and the Ugly.

The Dollars trilogy was not released in the United States until 1967, but when it did it propelled Clint to superstardom. The films weren’t well received critically, but Clint Eastwood was now a powerhouse in his own right.

The rest, as I’m sure you’ll know, writes itself. Clint Eastwood went on to star in blockbuster after blockbuster, and these days he’s well known as one of the greatest action stars Hollywood has ever known.

And yet there’s plenty about Eastwood that’s just as interesting off-screen, particularly when it comes to his family life.

As it probably to be expected when it comes to an international film star who played various heartthrobs throughout his career, Eastwood was certainly popular with the ladies, and that before his rise to fame as well!

Eastwood had a relationship with an unknown woman in 1953 that led to the birth of a daughter named Laurie in 1954, though he didn’t even know she was born. She was adopted by a couple living in Seattle.

Eastwood would go on to marry Maggie Johnson, but it’s rumoured that his interest in other ladies endured. Speculation is rife surrounding a number of extra-marital affairs during this time, including one with a stuntwoman named Roxanne Tunis that produced a daughter, Kimber, in 1964.

Eastwood and Maggie Johnson then had a son of their own, Kyle, in 1968, and a daughter, Alison, in 1972. Trysts and flings undoubtedly occurred over the following years, but it wasn’t until 1984 that Clint and Maggie would go their separate ways in an official divorce.

For his part, Eastwood would go on to sire two legally fatherless children – Scott, 1986, and Kathryn, 1988 – in the ’80s. The actor then became a father once more thanks to his relationship with Frances Fisher. Their daughter, Francesca, was born in 1993.

Fast forward to 1996, and Eastwood had tied the knot with date news presenter Dina Ruiz.

“She’s the one I’ve been waiting for,” he said at the time, and the couple welcomed a baby, Morgan, into the world.

Typical of Clint’s love life, however, it wasn’t to last. In 2004, the couple split from one another, leaving many to wonder just how many children Eastwood actually has.

As for an official figure, he’s never truly confirmed, though Morgan was believed to be the seventh of his brood.

Which is why questions arose when photos surfaced following the premiere of The Mule in 2018. As fate would have it, it was Morgan herself that prompted the speculation by way of uploading an image and captioning it: “SO RARE for all 8 Eastwood siblings to be in one room!!!”

It seemed as though Clint Eastwood had finally chosen to publicly acknowledge a daughter that he had kept secret for years – after all, this was a young woman, not a baby.

As to who her mother is, it’s said that she’s the former girlfriend Eastwood had when he was engaged to Maggie Johnson, and her name is Laurie Murray.

As previously stated, he had not known about Laurie’s birth, and she had been adopted into another family. Needless to say, the road to finding out the truth about her heritage was a long one.

When she found out that Clint Eastwood was her father, Laurie tracked him down and, since then, the pair have forged a strong bond.

Many have noticed that Murray was even arm-in-arm with Eastwood’s mother, Ruth Wood, at the Oscars back in 2004. Strangely, this wasn’t the first time that Murray had been publicly acknowledged, though for some reason people didn’t pick up on it.

A friend of Clint’s is said to have told the Daily Mail: “We always wondered why it was never really widely known or widely acknowledged before.

“He took Laurie to the Oscars around the time that he was nominated for Mystic River with his mom and Dina.”

I don’t know about you, but I think all of Clint Eastwood’s children are beautiful (not all that surprising given who their dad is).

Did you know about Clint’s eighth, unknown child? Let us know in the comments box below.