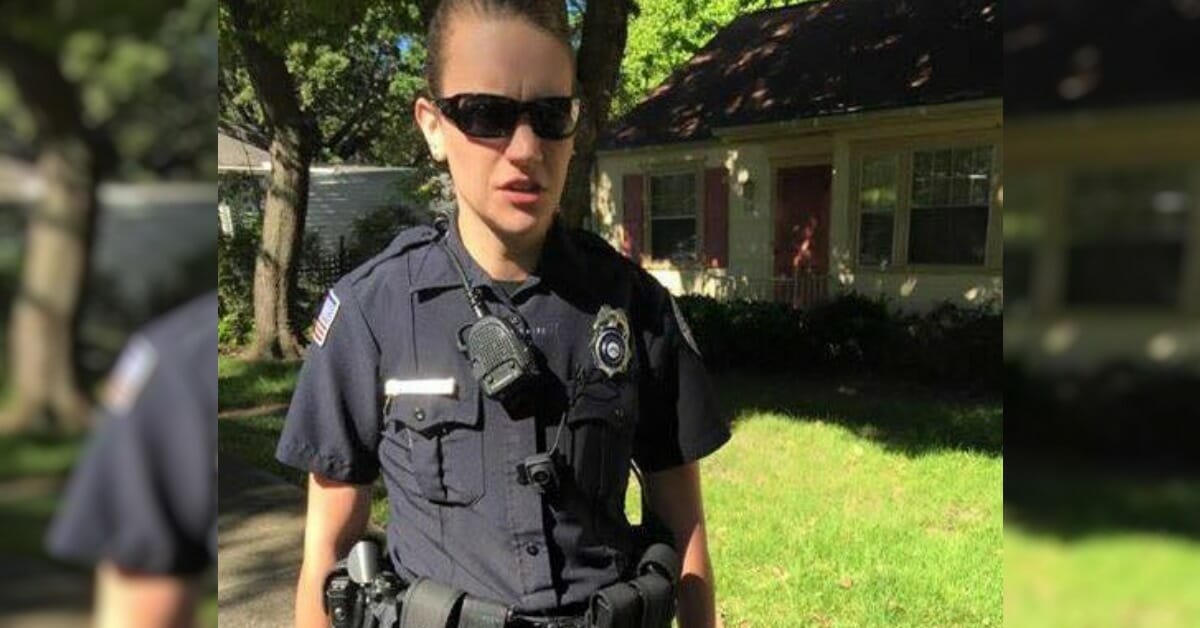 The life of a cop is a hard one indeed.

While the rest of us can turn a blind eye to trouble and strife if we like – that which doesn’t affect us, anyway – cops don’t have the luxury.

In fact, in most situations, they’re forced to tackle a problem head-on, for better or for worse.

That’s a good thing, too, especially when we see cases like that of 92-year-old Cynthia Hill, who had the good fortune to be visited by Gainesville officer Kristen Miller.

Right before showing up to the elderly woman’s residence, the Gainesville Police Department got a phone call from the woman’s family.

Officer Kristen Miller probably assumed that she would go unnoticed when she went to a vulnerable woman’s home to check on her well-being.

It should have been routine, it turned out to be anything but …

The Gainesville Police Department’s Facebook page has described what happened when two of its officers, Kristen Miller and Jessica Van, were dispatched to Hill’s home.

The 92-year-old woman’s relatives were concerned about their loved one, but they were unable to do anything about it on their own.

Officer Kristen went to the old woman’s doorstep and almost instantly found herself in the center of a situation she definitely didn’t expect.

She realised the bulk of Cynthia’s food had spoiled and that this old lady was all out of water, due to her electricity being out.

According to the Gainsville Police Department, water service to the home had also been shut off.

As soon as Officer Miller realized that this precious citizen in her community had no means of transportation to remedy her dire situation, she knew exactly what she needed to do.

Obviously, the older a person is, the less likely they are to be capable of moving around as they once did. In Cynthia’s case, mobility was a problem, and her situation almost brought the officer to tears.

Without a second thought, they sprang into action the only way they knew how to make sure Cynthia had everything she needed to get by.

In that instance, it meant dipping into their own wallets to get her the supplies she needed.

When Officer Miller returned with fistfuls of grocery bags, all purchased from her own paycheck, the elderly woman was speechless.

Officer Miller returned with a host of purchases, including non-perishable groceries, water and Gatorade – so that the 92-year-old could keep her energy levels up.

But, the generous efforts didn’t end with the bags of much-appreciated groceries brought to the 92-year-old woman.

What’s more, the Gainesville Police Department confirmed afterward that they were working on attending to Cynthia’s utilities as well, because no vulnerable person should have to live in such troubling circumstances.

Officer Miller could have made it easy for herself and take the welfare call, see that the woman was alive upon arrival, and report back to her superiors as well as the woman’s family that she was simply still breathing.

But this wonderful policewoman went above and beyond the call of duty.

Besides that, Officer Kristen Miller isn’t new to helping others. She knows when someone is struggling, Miller spent years caring for her parents who had cancer and then became interested in law enforcement to help people.

“My family has played a big role in my life. Both my parents had cancer; my mother had breast cancer followed by leukemia and my father had a brain tumor. I spent my high school and college experience taking care of them both. It was a struggle getting through school worrying about them and working to help pay bills the best I could”, Miller told AbernathyCochran.

There are angels among us – it’s great to see good people doing good things in the world. This is what 90% of police work is really about!

This police officer rightly deserve praise and tribute for doing their all to make sure Cynthia was comfortable and without stress. Especially since she paid for Cynthia’s things out of their own pockets!

Officer Kristen Miller truly wanted to help this person and ease the family’s concerns by paying it forward and stocking her shelves with all that she needed to eat and drink.