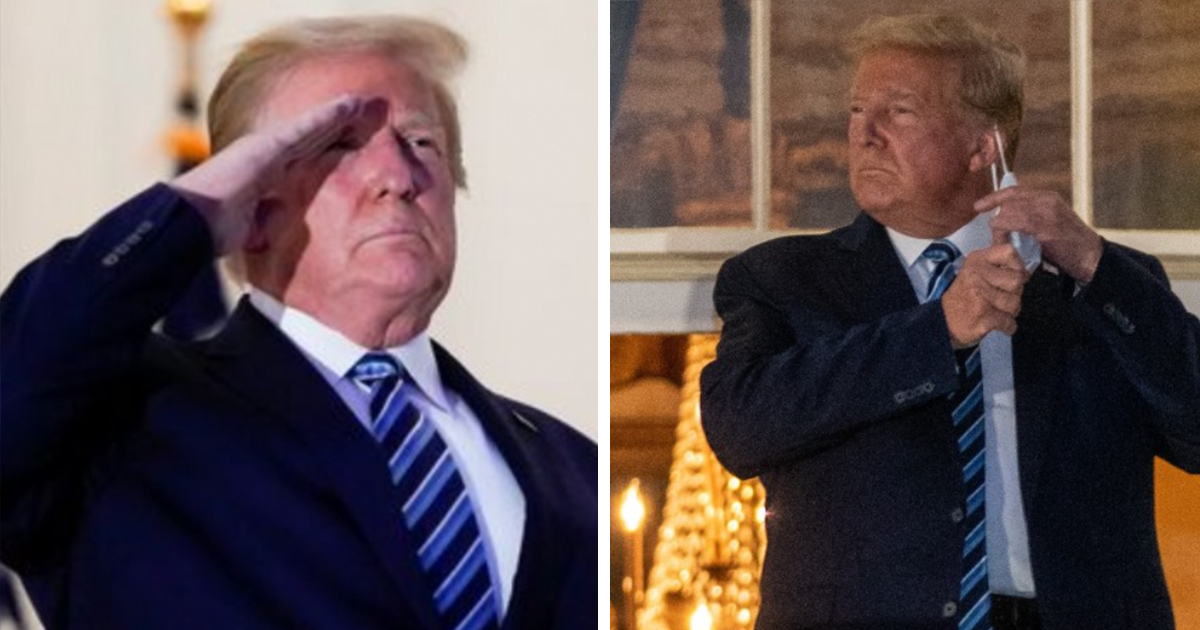 President Donald Trump has been discharged from Walter Reed Medical Center after being treated for coronavirus.

According to reports, the president returned to the White House by way of Marine One. There, he immediately walked to the Truman balcony in order to pose for photos.

The media were quick to pick up on the fact that the 74-year-old removed his face mask – despite still being infected with COVID-19 – and stood for several moments in order to be the subject of powerful photographs.

It’s not known if President Trump put his mask back on before entering the White House, but the man himself said he felt better than he has in 20 years.

Fears were sparked at the weekend when the president was taken to hospital after testing positive for coronavirus. There, he benefitted from an experimental steroid treatment that has only been used in severe cases in America.

Despite conflicting reports as to the degree of danger President Trump was in – his age and weight place him the ‘high-risk’ category – he was able to fly home yesterday to resume official duties.

It wasn’t long before he’d raised more eyebrows when he told people not to be afraid of COVID-19, though the virus has so far killed more than 200,000 Americans.

“Feeling really good! Don’t be afraid of Covid. Don’t let it dominate your life,” he wrote on Twitter.

“We have developed, under the Trump Administration, some really great drugs and knowledge. I feel better than I did 20 years ago!”

At the weekend, Trump was heavily criticised for getting into an SUV to wave to supporters who had gathered outside Walter Reed Medical Center. Medical advisors said it was irresponsible that he not be self-isolating given his COVID-positive status, but he responded in typical Trump fashion:

“It is reported that the Media is upset because I got into a secure vehicle to say thank you to the many fans and supporters who were standing outside of the hospital for many hours, and even days, to pay their respect to their President.

I’m glad President Trump’s condition isn’t as dire as first feared, but I don’t agree with the irresponsible manner in which he continues to behave.

Telling people not to be afraid of coronavirus after benefitting from the best possible healthcare in the world is out of touch and, simply, inappropriate.

Share this article to remind others to remain wary of COVID-19 and continue to follow all the necessary guidelines.