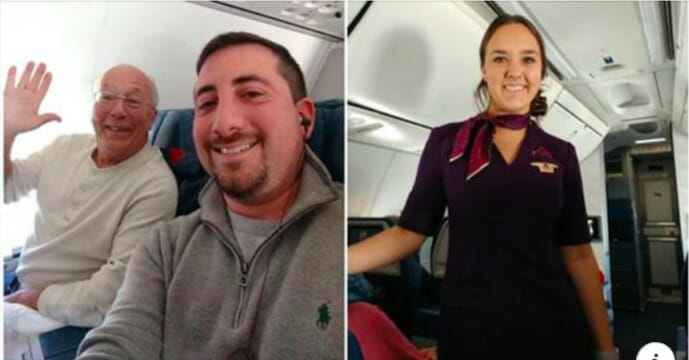 Christmas is one of those times of the year that mean gathering with our loved ones. But unfortunately, with people leading busy lived and family members often living rather far from one another, it’s not always easy for such gatherings to occur.

For father Hal Vaughan, spending time with his daughter Pierce is always a priority, so when the holiday season came around he knew he wanted to see her as much as possible.

But there was one problem: Pierce is a flight attendant for Delta Airlines, and happened to be put on both Christmas Eve and Christmas day shifts, meaning being home with her family impossible.

Hal, however, had a solution for the problem and now hundreds of thousands are amazed at the loving father’s gesture.

When Hal relaized his beloved daughter wouldn’t be home for the holidays, he did something very unique: he came to her up in the sky instead,

In fact, Hal booked himself no less than six flights, just so that he could spend time with Pierce over the holidays.

Like many airlines, Delta offers families benefits and parents can travel for free inside the USA — based on availability only however, meaning they can get a seat only if space remains available after all paying customers have boarded.

But a Christmas miracle was on course for the Vaughans: Hal managed to get on all six flights he wanted, even earning a first class seat on one traveling from Florida to Michigan, Pierce later wrote on Facebook.

While on that flight, Hal shared his story with the passenger sitting next to him, a man named Mike Levy.

Mike was so touched by the story he later expressed it on his Facebook page, posting a selfie of himself and Hal alongside Pierce in her Delta Airlines uniform.

“I had the pleasure of sitting next to Hal on my flight back home. His daughter Pierce was our flight attendant who had to work over Christmas ☹️. Hal decided he would spend the holiday with her. So, he is flying on each of her flights today and tomorrow around the country to spend time with his daughter for Christmas. ?. What a fantastic father! Wish you both a very Merry Christmas!” Mike wrote in his post.

Mike’s post soon garnered much attention, with tens of thousands liking it and dozens commenting to share their praise for the dedicated father.

“She is lucky she has family that loves her so much,” one person commented.

“A true representation of what is really important in this life. Most gifts in boxes will soon be forgotten. This sweet memory will last a lifetime,” another wrote.

Anything for His Daughter

Hal has always been supportive of his daughter’s career choice, even pinning the wings on her uniform after she graduated as a flight attendant, according to 11 Alive.

But just months after Pierce started her first job as a flight attendant, Hal had an unfortunate accident and broke his neck. He was forced to undergo surgery and was unable to walk or feed himself for some time. There was even the fear that he would never walk again.

Thankfully, after months of hard work, Hal was nearly recovered, luckily allowing him the opportunity to travel and spend time with his daughter when Christmas came around.

Behind the scenes was Pierce’s loving mother, who Pierce says took one for the team: “I’d just never been without my parents on Christmas, so my mom took one for the team and stayed home with all of the pets so he could take his first trip since the accident with me,” she told 11 Alive.

What a wonderful family and story! Share if Hal’s love for his daughter warmed your heart, too.