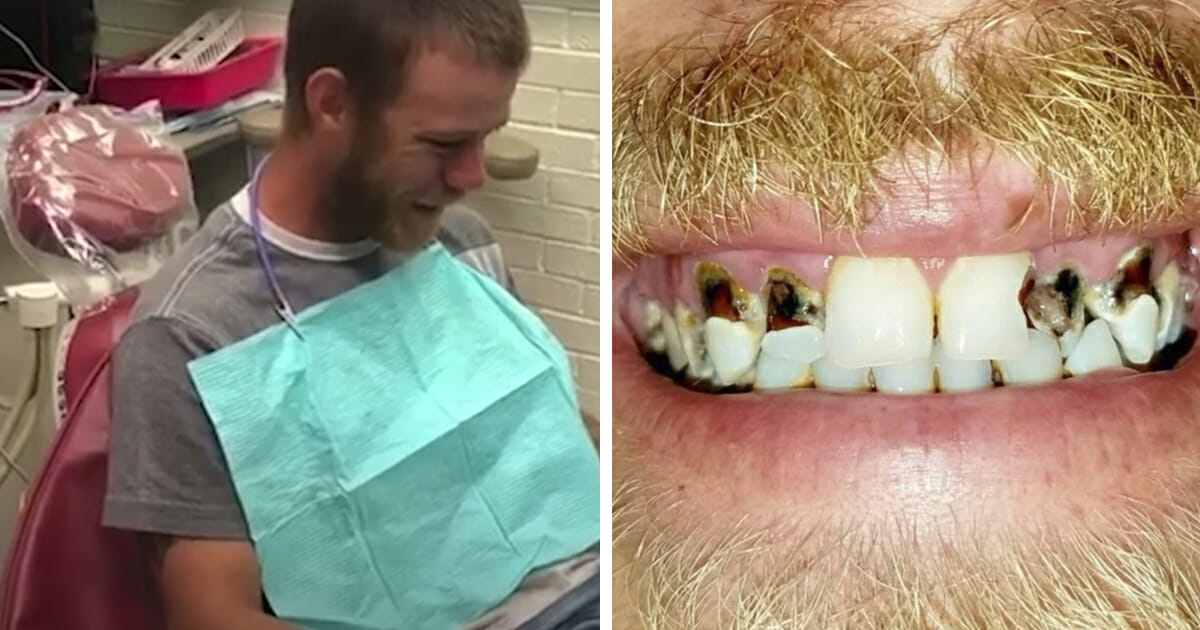 A smile can be the very first thing we notice about someone when we meet them, so it’s hardly surprising people are so self-conscious when it comes to their teeth.

Sure, people do exist who will give the world a cheesy grin no matter what the state of their pearly whites, but for the most part people who feel they have bad teeth try to keep their mouth closed as much as possible.

Such was the case with Dillon Moore, whose top canines looked rotted through, barely connected to his gums.

As one can imagine, it would probably have cost a great deal to pay for the necessary work to fix things. Fortunately, there’s a dentist in Dillon’s area who isn’t your usual practitioner.

Dr. Kenny Wilstead of Marshall Family Dental in Marshall, Texas, has been garnering quite the reputation.

From the outside, his business looks like your usual practise. It’s a for-profit business where people can pay to have everything from a standard check-up to a complete refurb of their mouths.

Only, Dr. Kenny’s is so much more than that. He knows just how far a small gesture can go for people who need it. Sometimes, it’s not about the money but rather the sense of doing something right and putting compassion and generosity at the forefront of your initiative.

One day, the dentist stumbled across Dillon Moore on Facebook and noticed that the father of two was doing his best to hide his teeth in all of his pictures.

Wilstead offered to pull a tooth for free, but Moore declined on the basis that he couldn’t take time off work. One year later, however, he decided to take Wilstead up on the offer.

“He completely forgot about me while an entire year went by, and then he got a tooth ache,” Wilstead said, as per the Daily Mail.

“His boss chose to send him to my office to get his tooth pulled and gave him a day off to do it.”

Eventually, Wilstead handed Moore a mirror and told him he was done with the work. Only, the reflection that stared back at Moore couldn’t really be him, could it? The face in the mirror had a mouth full of brand-new teeth.

Yep … Wilstead had given Moore a new smile without him even expecting it. What’s more, he’d done it all for free.

“I was wondering what was taking so long,” Moore said, crying. “I haven’t smiled since I was a kid without my hand over my face.”

According to Wilstead’s later Facebook post, Moore sent the dentist a photo of himself and the kids, a big wide grin on his face.

What a heartwarming story, and one that proves that gestures don’t have to be mighty and grand to go a long way.

Dr. Kenny Wilstead certainly deserves to be praised for his selfless work. Share this story if you think what he’s doing is the right thing!