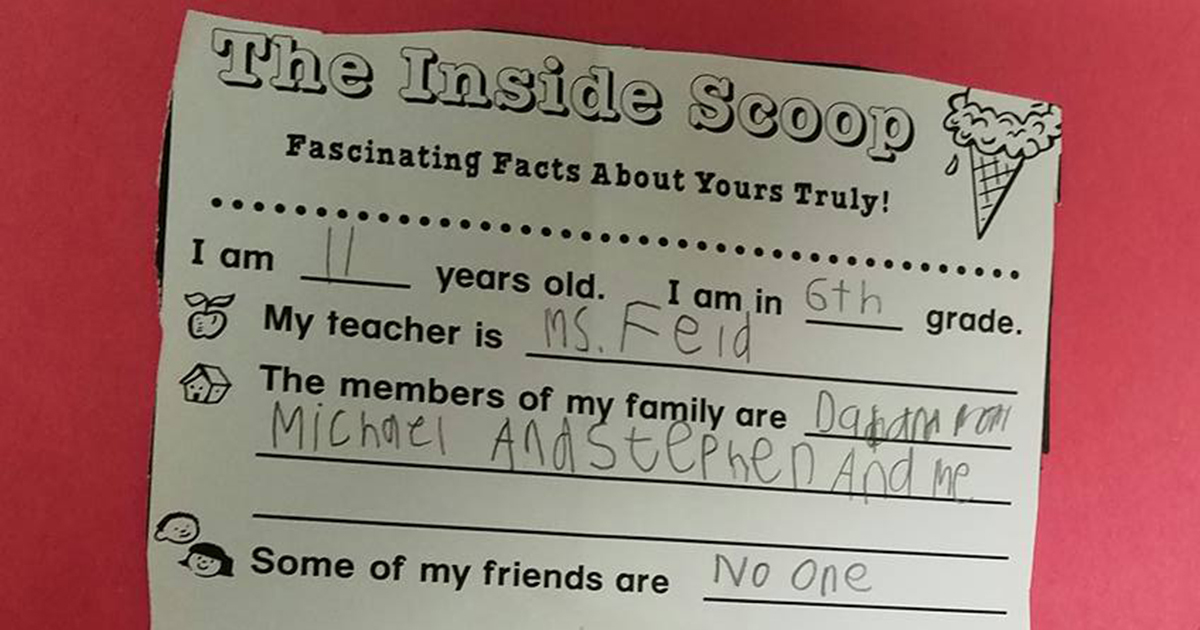 It was a typical back-to-school night for Bob Cornelius of New Jersey. He showed up to meet his son’s teachers, catch up on the latest day-to-day activities, and quickly snap a few photos of his 11-year-old’s classwork on display.

It wasn’t until later that night when he was looking back through the photos he took that he realised how truly lonely his son was.

The question on the poster was simple, as was the answer though it was still “like a punch in the gut” said Bob.

Preceding facts like, “My favorite food is Pizza” and “My favorite sport is Soccer” there was one prompt which said “Some of my friends are…” to which young Christopher had replied quite simply:

“Never have five letters cut so deep, and they weren’t even directed at me….it was just an overly simplistic statement that spoke volumes,” he wrote in his Facebook post which has been shared more than 50,000 times.

Noting that his son is on the autistic spectrum, he wrote about seeing his son’s longing for sleepovers with friends like he had seen his brothers have over the years.

The problem wasn’t that he wasn’t allowed – but rather that he had no real friends to stay the night when given the opportunity.

He thought of a similar story which had recently made headlines. Recently a Florida State football player had sat down to eat lunch with an autistic boy who was sitting alone. After the story went viral, the boy had new friends sitting with him each day.

“That’s what made the story great….it wasn’t staged…it was just a real moment of human kindness,” he wrote.

He noted: “These stories are newsworthy because they are unusual. We are not used to hearing about kids being kind to those that are different and unique…I would love to see us get to the point where this sort of behavior is the norm, not the newsworthy exception.”

Further in his Facebook post, Bob proposed the only solution he could think of for kids and parents in similar situations:

“The only solution I can come up with is to share this with you and ask that you have a conversation with your kids. Please tell them that children with special needs understand far more than we give them credit for.”

Bob asked for two simple things to help spread awareness and empathy: The first was to share this story with friends and family, and the second was for parents to speak with their children about “how awesome it is to include those who are a little bit different.”

Share this story now if it moved you, too, and to help him get the conversation started!