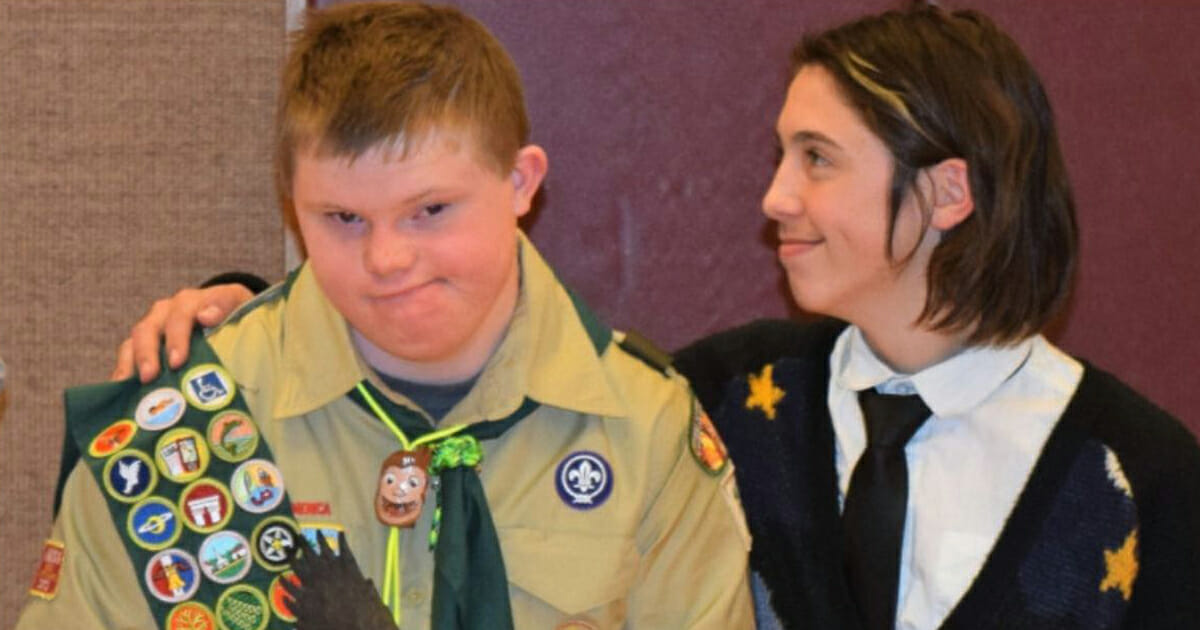 I think we can all agree that a world wherein people are not held back as a result of their disabilities or differences is one we should be striving towards.

Rising to overcome adversity is an achievement that should be celebrated, showing courage when life knocks you down should be admired.

Which is why Chad Blythe had every right to be furious when the Scouts‘ national headquarters stopped his son becoming an “Eagle Scout”.

The reason? He said it was because his son has Down syndrome.

According to Chad Blythe, last year his son Logan was extremely close to becoming an Eagle Scout (the highest rank in the Boy Scouts). Just one step away, in fact.

However, joy soon turned to disappointment for the 15-year-old when his project to make him an Eagle Scout was rejected. To become an Eagle Scout, would-be candidates have to earn a number of merit badges demonstrating they’ve learned a series of skills, and then complete a volunteer project on top.

Logan’s project, planned with help from Chad, was to make kits for the parents of newborns with disabilities.

After the relevant preparations had been made, Chad sought sign off from the local scout group and state parks department. They both consented, and it looked as though all of Logan’s hard work was to be rewarded.

You can imagine the family’s surprise, then, when the Scouts’ national headquarters made a drastic U-turn and rejected it.

Speaking to Metro, Chad said: “We went through, got that approved, even got some pictures with the council members that approved it.

“24 hours later we got an email from those very same council members indicating that they have to suspend Logan’s Eagle project, and were very sorry they approved it.”

As far as Chad was concerned, the only reason Logan was denied was because of his disability.

“The young man MUST do the requirements as written, including leadership responsibilities,” the email reportedly read. “He also must be able to plan, develop and carry out his Eagle Project.”

It got worse, though. Chad and Logan attended a meeting a few weeks later to address the problem, only to be told Logan was being stripped of his badges and ranks for using outside help. Effectively, this was a demotion back down to Cub Scout level.

As per the Washington Post, Chad said that Logan has the cognitive abilities of 4-year-old and is incapable of writing or holding an intelligible conversation, thus putting him at a huge disadvantage when it comes to being expected to complete projects alone.

For Chad, seeing his son treated in such a way was heartbreaking.

“His face was just dejected. He doesn’t like taking about it, hearing about it, or seeing us upset about it,” the dad explained at the time.

“Now he doesn’t even want to touch his scout uniform or go near it.”

“My son is hurt. Again we were expecting this to be a non-issue, to be able to go ahead and be thrilled to have our Down syndrome son to be an Eagle Scout.”

Fortunately, the threat of the lawsuit was enough for the Boy Scouts to reverse their decision. Chad and Logan were invited to a special meeting with the group’s national commissioner, and Logan’s 22 badges were returned to him. What’s more, the group announced they were creating a path so that Logan could earn the Eagle Scout rank, which was all he ever wanted to do.

Congratulations to Chad and Logan for fighting and winning their battle! Logan’s courage is not only inspiring, but his never-say-die attitude will certainly see him go far in life.

Share this story if you’re happy Logan will be given the same chance as everyone else.