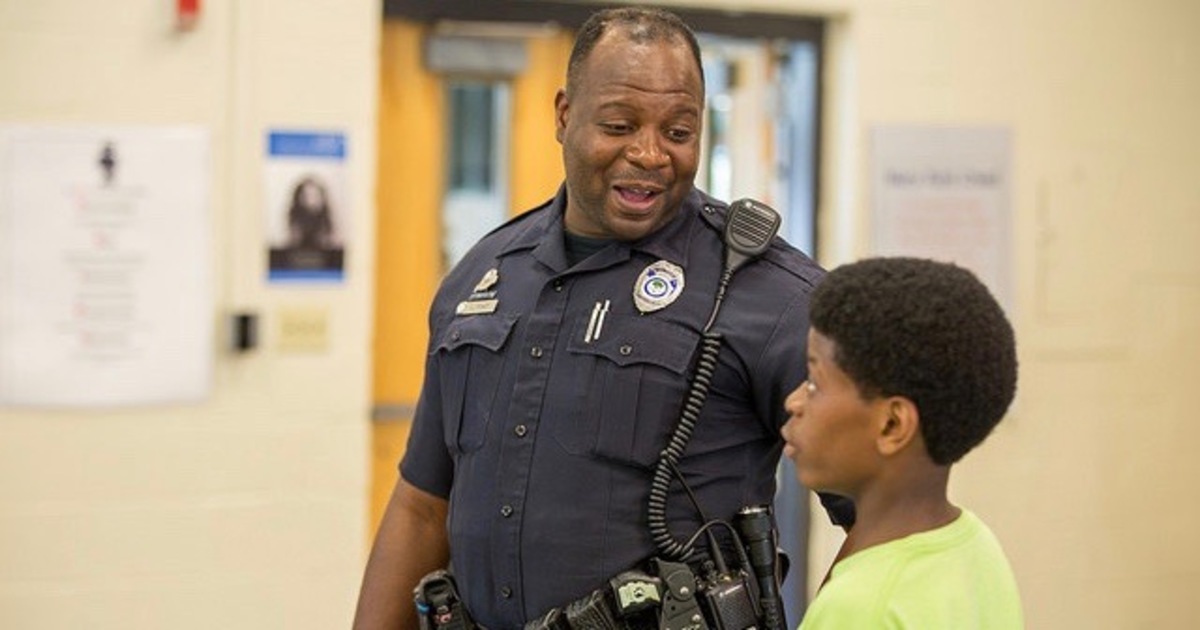 Dads and other male figures are so important in the development of boys as they grow up. And for those fortunate enough to have great dads, they can rely on the strength of their dads until they become well-adjusted adults themselves. But for those with absent or absusive dads, navigating life is often be a lot harder. Fortunately, though, there are also some men out there who understand this and go out of their way to be a positive influence on the young people in their community.

The boy in the story below had an abusive, alcoholic dad, and I can’t imagine what it must’ve been like for him to grow up in that household. But when a police officer came to the boy’s house to take his dad away, the cop took away the source of a lot of pain. But when the officer came into the boys life again a couple years later, he changed it forever…

“When I was 8 years old, my father decided that it was time to amp up his drinking rage and beat the living hell out of my mother… again.

As this was customary, I usually hid in the basement with my little sister until the morning, but we had just had an assembly in school about how to use 911 for help if anything bad was happening.

I dialed 911. I don’t remember speaking to anyone, but I left the phone off the hook and then tried to stand in front of my mother.

I went through a wall right after she did.

I remember the cop came to the hospital, did his report thing, gave my sister a teddy bear and that was it.

My father finally was out of our life after my mother had the guts and the police report to get an order of protection, then file for divorce and went out and got a job.

I for the first time in my little life got to sign up for little league. I did not have any friends outside of school and I was excited to meet people but was shy as hell.

I do not know how little league works these days, but when I was a kid (I am now mid 30s) there was a “try out” in a big gym with all the kids in the league for a few hours where the coaches would all evaluate the kids and try to handicap teams with the same level of talent. I had… none. My extent of baseball was having a mitt my mother got me and trying to throw a baseball in the air and catch it myself. I was beside myself with how bad I sucked.

We went home, and of course I knew I was going to be on a team, but I figured I would just ride the bench and or be a bother. First day of my team’s practice my mother takes me to the field, we get our T-shirts for the team and pants, and meet the team and… the coach was the cop that arrested my father.

He never said anything, he never treated me any different from anyone else, he never approached my mother or anything, but he did orchestrate the other guys on the team and me to be in social situations together so I could make friends. That short summer through being picked on a baseball team and having a coach that cared completely changed my life. I wasn’t scared that my father was going to show up because the cop that arrested him was my coach. At the end of the season, probably because all the kids on the team begged him, he brought his squad car to the last game and let all of us have a turn sitting in the driver’s seat and hitting the buttons.

I asked him if one day I could be a cop like him. He told me that I would be a good cop. Looking back, it’s pretty funny.

At 17, my mother was grinding two jobs trying to make ends meet, so I graduated high school early and enlisted. Got out of active duty, joined the national guard… and went to college… Got out of college, went to Iraq for army stuff… and took a police test with the same department that serviced the area that I used to live in growing up.

Ten years later, the cop that changed our lives was retiring, and I went to his office and asked if he remembered me.

He smiled and said, “I told you you would be a good cop.” I was also interviewing for a special unit that he was in charge of… WHICH I DID NOT GET… but hey, there is always next time.

I look at my wife and kid and house and everything I have and it comes down to an 8-year-old boy who was scared of everything having a cop that cared as a little league coach.”

Please share this story as a tribute to all of the men out there who are willing to go to bat for boys who didn’t get the father they deserved!