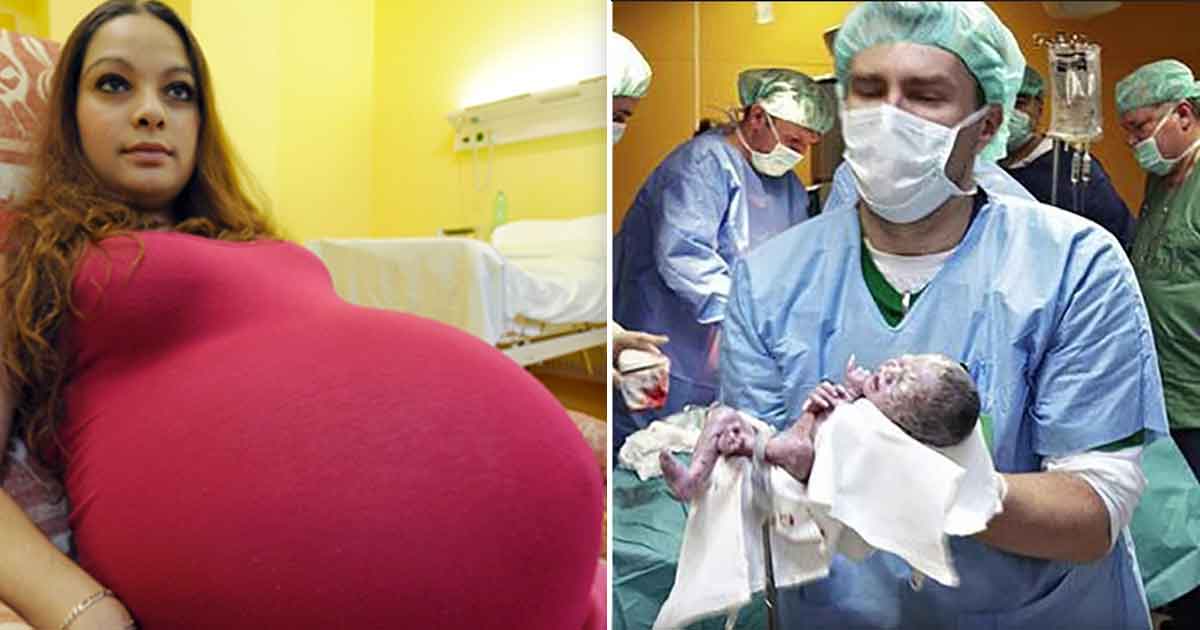 When it comes to feelings of elation, there aren’t many as powerful as when a woman realizes she’s pregnant.

For 23-year-old Alexandra Kinova of Milovice, Czech Republic, however, her rollercoaster of a pregnancy was something that went truly beyond the realms of normality.

Alexandra and husband Antonin had already been blessed with a son. Following her discovery that she’d conceived a second time, the couple were eagerly awaiting a little brother or sister for their boy.

There was to be one small difference this time around though … Alexandra’s pregnancy would go on to become world news.

Alexandra and her partner would be forgiven for expecting a repeat of the first time around, right up until they saw the ultrasound. On one fateful day in 2013, the couple first set eyes upon their baby on the big screen.

It was then that doctors gave them the news that left Alexandra in tears of joy. As per the Daily Mail, there wasn’t just one baby growing inside of her, there were two.

Alexandra and Antonin had previously talked about having three children, so the surprise was one they accepted with smiles. Little did they know that this particularly surprise was just a side portion compared with the main meal they were about to be served.

The next time they visited for scans, the doctors had even more incredible news for the pair.

This time, the ultrasound had shown something none of them could have predicted – something, in fact, that no parent imagines they could possibly ever hear.

The mom of one was told she was about to become a mom of five. That’s right, she was carrying four babies.

Only, she wasn’t … there was yet one more twist in the tale.

The 23-year-old’s stomach refused to keep growing. Once again, Alexandra and Antonin went to an ultrasound, and once again doctors told them something shocking. In fact, they’d found something that practically made history. She was pregnant with no less than five babies.

To put things into perspective, the chances of a female falling pregnant with quintuplets is one in several million.

Remember Alexandra Kinova, the Czech mum who gave birth to quins? Here they are – and check out their amazing scan…

When the summer rolled around, it was time for the big day … the birth.

Up until the day in question, doctors had been unable to tell the sex of the babies. In any case, the medical team in the delivery room was twice the size of usual, and not a soul in there wasn’t nervous concerning what was to come.

In the end, though, Alexandra gave birth to four boys and one girl.

Welcomed to the world via C-section, the occasion marked the first time in the history of the Czech Republic that quintuplets would be delivered without the mother having received any sort of fertility treatment beforehand.

Dad Antonin was actually close to missing the birth, as he got stuck in traffic. In the end, though, he managed to get to his wife’s side in the nick of time.

The boys were named Deniel, Michael, Alex and Martin, whilst the little girl was named Terezka.

Soon after the birth, both mother and babies were taken to the intensive care department to recover. In the end, things worked out just fine, and all six were able to go home happy and healthy.

According to news.com.au, doctor Alena Mechurova explained: “In this specific country, we have been actively recording statistics of birth ever since 1949 and in that time, there has never once been a mention of quintuplets. As a matter f fact, quintuplets are birthed in the Czech Republic once in every 480 years on an average.”

Today, it’s been a few years since Alexandra’s unique pregnancy, but it’s lost nothing of its magic. See more in the video below:

Share this article to wish the quintuplets well in the future!