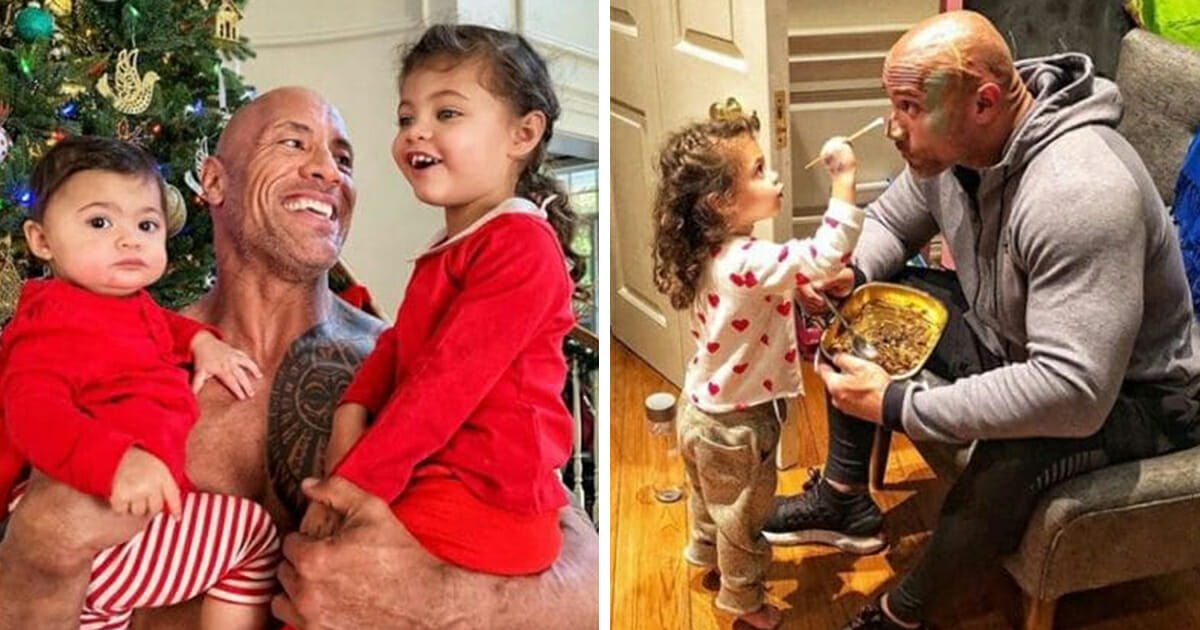 When you think of Dwayne ‘The Rock’ Johnson, most people conjure an image of a strapping, 6ft 5in giant who’s made a career out of being imposing.

Of course, the reality we’ve come to learn is that Johnson can be a big softie away from the camera, especially so when he’s around his daughters.

His Instagram page provides the perfect window into home-life for Johnson and his family, and it’s allowed his millions of followers to garner an insight into what a gentle and kind soul he always is …

Me: Alright baby come give daddy a kiss he’s gotta go to work. Jazzy: But daddy you need your nails painted. Me: Nope we already painted daddy’s nails a few weeks ago, now daddy’s gotta go make that bread ? and go to wor… Jazzy: BUT DADDY I have to paint your nails. Me: Woman you better start puttin’ some respeck on my name or #SoWhatColorNextDaddy? #SomethingCoolAndBadAssPlease ?????

One recent post by Johnson has gained particular attention, simply for how darn cute it is!

In it, the former WWE wrestler turned Hollywood superstar can be seen cradling both of his girls, the love for both of them evident in his every move.

But it’s perhaps his caption for the image which has truly propelled it into the realms of endearing sweetness.

6pm. London, England. I was warming up in the #IronParadise to crush my leg training when I get the text from @laurenhashianofficial asking “Big Daddy feel like cooking dinner for his girls?”…I texted back/ Hold my beer and watch this. Took my sweatshirt off, tied it around my waist like an apron and went to work. Served hot and delicious: Ribeye steaks BBQ ribs Basmati rice Handled and done – and no one spit my food out. I will now go back to train legs in the #IronParadise. For the record, “hot and delicious” is my nickname on weekends when I’m 4 tequilas in. #GetTheJobDone #TakinCareOfMyGirls

“Daddy’s arms. I ain’t gonna be able to hold ‘em like this forever, so you better believe I snatch these cookies and love ‘em up every moment I can,” he wrote.

“Plus, I know there’s gonna come a day where in daddy’s arms is the last place they want to be.”

Indeed, Johnson knows that his daughters aren’t going to be pint-sized for the rest of their lives. If they take after him, it won’t be long until they’re looking down on people themselves.

In any case, it’s so heartwarming to see Johnson show off his sensitive side. It’s clear for all to see that the home he and Lauren Hashian have created is a loving one, and one wherein his girls will grow up knowing just how much they’re adored.

It’s moments like this that you’ll watch for ever and ever and ever. This is what it’s all about. These are the true gifts. Feeling so blessed and so grateful beyond measure on this BIRTHDAY ??❤️?#FamilyLoveAndBabies

Dwayne Johnson, you might be a physical beast of a man, but you have the heart of gold. Keep up the good work, sir.