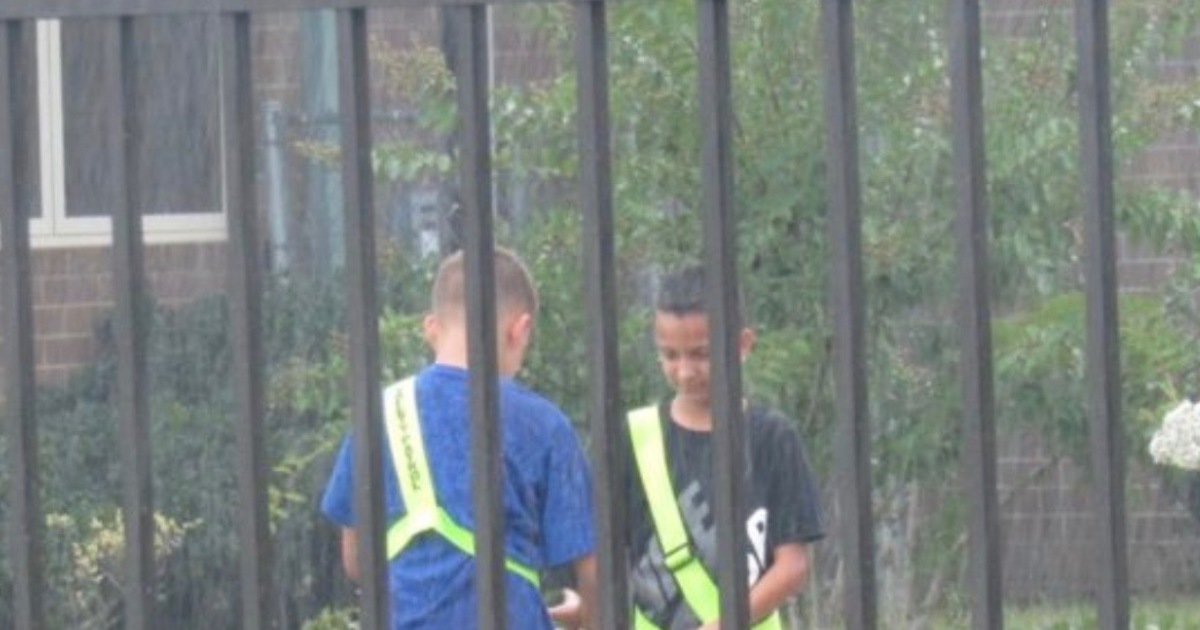 These days, there are so many depressing stories out there. Even news about young people is full of stories of teens being disrespectful to adults and kids bullying their classmates.

So its so refreshing to hear some good news sometimes and remind ourselves that there are still some fine people out there, including members of the newest generation.

When I heard this story, it really restored my faith in humanity. It’s about two boys in Florida, and what they did proves that at least some young people are still being taught good values and are developing into good citizens. Scroll down to read this beautiful story!

The rain was coming down hard at Coppergate Elementary School in Middleburg Florida one day back in late August. Then, teacher Kim Miskowski looked out into the courtyard and noticed something strange.

Kim saw two little boys, and when she realized what they were doing, she took out her camera and started taking pictures.

But the boys, Nate and Isaac, weren’t skipping class or horsing around — they were taking town the flag in the pouring rain.

Even though Nate and Isaac were getting soaked, they didn’t just pull down the flag and run for cover. As school’s safety patrols, their job is raise and lower the flag, and they weren’t about to let the rain stop them from doing their duty.

So the two 11-year-olds slowly lowered the flag and continued to follow protocol, making 13 folds until the flag was a perfect triangle.

Most kids probably wouldn’t have had the respect for the flag to stand out in the rain for it, but Nate and Isaac did.

“I feel like it was the respectful thing to do,” Nate told Fox News 30.

Kim, the teacher who took the photos, was touched and surprised by what she saw.

“They were folding the flag reverently. They were reverent. And they were doing 13 folds. And you know, our country is in a little bit of turmoil. It just struck me. When they walked away they held it, cradled it to protect it. And it was just a moment that was meant to be, I think,” Kim told Fox News.

Nate and Issac’s school was so impressed by their actions that it posted the photos, along with a message, on Faceook:

“This is what RESPECT looks like at Coppergate. Two of our safety patrols, Nate and Isaac, quietly went to the courtyard and completed their flag duty in a driving rainstorm. Not only did they bring the flag down, they also stood in the wind and rain and calmly completed the 13 folds. Then Nate protected the flag as he walked with honor and respect to retire it for the day. We are so proud of Nate and Isaac for their responsibility, respect, devotion to duty, and love of country.”

The post was liked and shared thousands of times and it even reached Florida senator Marc Rubio. This week, he sent a representative to give the boys each a certificate, a letter, and a flag flown on the United States Capitol Building to thank them for their fine work.

It’s so wonderful to see the values that these boys already have at 11 years old. Their parents have really raised them rignt!

For more on this story and to hear from the boys themselves, watch this news report:

Aren’t these boys just great? I can tell they’re going to do great things when they grow up!

The world would be a better place if we all had a little more respect. Share if you agree!