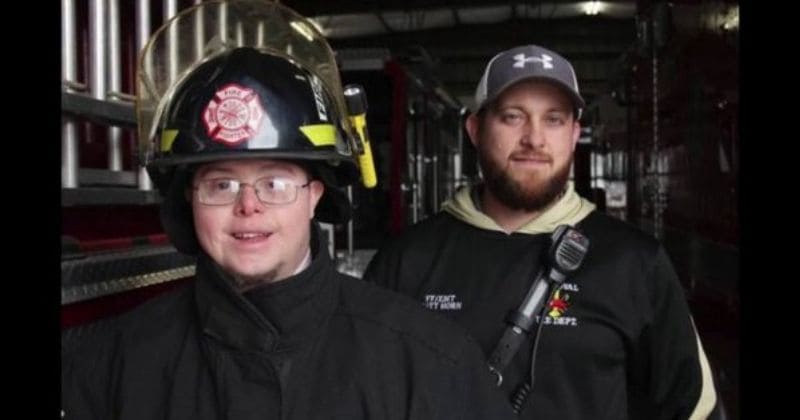 We can condemn it and call it out wherever we see it, but the sad truth is that bullying is almost impossible to eradicate entirely.

People picking on others because of perceived differences is a blight on society that has existed for as long as humans have co-existed with one another. It’s not cool, it’s not big, and it’s certainly not clever, but, unfortunately, it’s a detestable part of nature.

33-year-old Jason Eagan knows just how debilitating it can be. He was diagnozed with Down’s syndrome at birth, but he was determined to never let that stand in the way of his dreams. In 2016, he joined the Sandoval Illinois Fire Department as a volunteer firefighter, thus fulfilling the single biggest goal in his life.

Sadly, it wasn’t long before people began to pick on him because he was different …

When Jason first signed up, there was a degree of apprehension with regards to his appointment. He couldn’t be refused because he passed the physical and completed all the necessary paperwork, but that didn’t stop murmurs of dissension.

In the beginning, Jason enjoyed is time with the department, but as time progressed it became apparent that not everyone was happy with his inclusion. Certain colleagues began to bully him because of his disability – it got so bad that Jason had to quit to preserve his mental health.

Though Jason himself wasn’t vocal on the fact that he’d been unfairly forced to stop doing something he loved, his sister, Kristin Sian, was of a different mindset.

“My brother, Jason Eagan, has Down’s syndrome and became a firefighter in Sandoval, Illinois,” she said. “He responded to every single call and it has come to my knowledge he quit a few months back due to harassment from a fellow fireman. It disappoints and angers me that this was allowed and that a grown man bullied a fellow fireman simply because he’s different.

“I’m beyond pissed off! Be thankful I live 400 miles away because I would [have taken] action on your sorry behind! My brother is an incredible person with an amazing drive and heart. You should be ashamed of yourself. I love you, Jasey! Keep your head up!”

Kristin left her post public so that it could be shared by others who felt aggrieved by Jason’s treatment.

A short time later, Kristin elaborated on what Jason had been subjected to. Suffice to say it’s truly terrible.

“A few members of the department referred to Jason as a r*tard! This is not okay! Something needs to be done!”

It wasn’t long before media outlets began to pick up on Jason’s plight. Swathes of people hit out at the Fire Department in his defence, all of them of the opinion that it simply wasn’t OK.

The Eagen family themselves then began to contact attorneys and disability advocates because they wanted the individuals responsible for harassing him to be punished adequately. Soon after Kristin’s post went viral, Jason’s mother took to social media herself to reveal a timely update.

“The Sandoval Fire Department has taken action! Sincere apologies have been made to Jason! They have offered him his job back and Jason excitably accepted. His gear has been returned to him and he is back on at the department! He is so excited!”

I don’t know about you, but it warms my heart to see the measures people went to in a bid to ensure Jason’s rights and integrity were protected. No one should be prejudiced against simply for the way they were born, or how they look. Jason is simply trying to live out his dream, and to try and take that away from him with cruel words and actions is lower than low.

We’re so happy that Jason was able to get justice! There’s always some low life person who’s gonna pick on someone else because their life is troubled or they just are simply cold hearted & have no home training, self respect or morals – but thanks to all the people that fought his corner, many of whom didn’t even know him!

Help us pay tribute to those people by sharing this article on Facebook. Together, we can send bullies a message that they will never prosper.