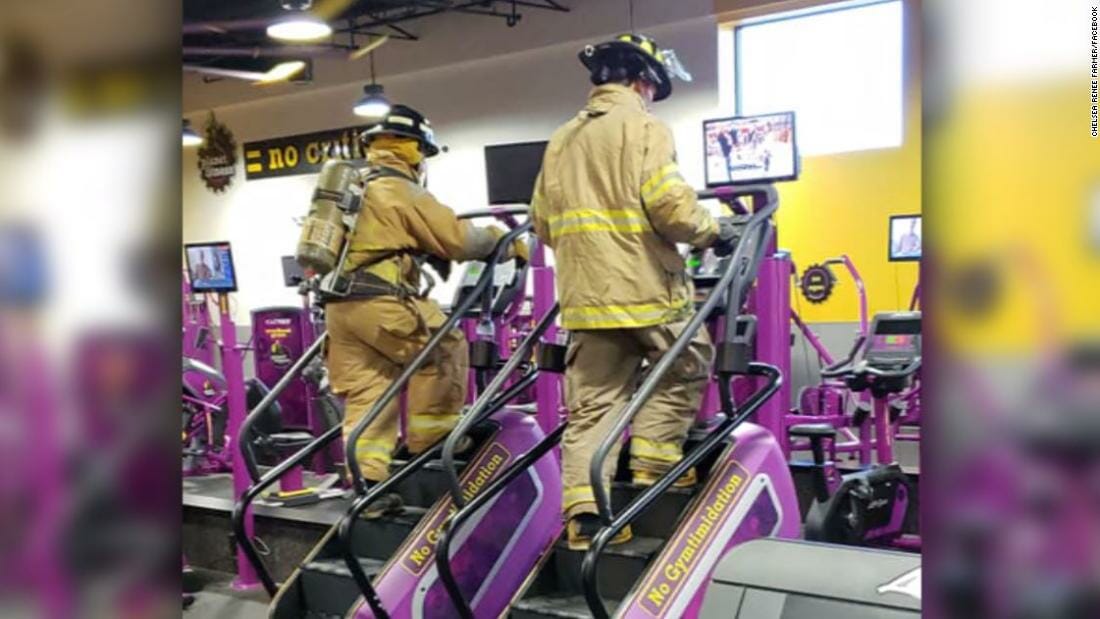 The sheer pointless loss of human life is enough to bring a tear to the eye even now. In the midst of terror and ruin, however, there was also courage.

Not least from the service men and woman who responded on the day the hijacked planes hit the Twin Towers. 343 firefighters lost their lives in the line of duty on that horrific day – many in the process of climbing stairs within the burning buildings, dressed in full firefighting gear.

In honor of that epic march into the dangerous unknown, firefighters around the U.S. replicate their actions every September 11 at 8:46a.m, be it in stadiums, public buildings or even on StairMasters at the gym.

Chelsea Renee Farmer was in the middle of her morning workout on Wednesday, September 11 this year. She managed to catch a truly impressive spectacle unfolding right before her eyes.

Seventeen years ago, a void was left in our city and hearts. In the wake of the unimaginable, we came together in unity. Today, in that spirit of unity hundreds gathered together on the #911Memorial to honor the 2,977 people killed on 9/11. _____ The #911Memorial will stay open until midnight for a special viewing of Tribute in Light. Share your photos with #TributeinLight and #Honor911.

When Chelsea Renee Farmer went to the gym this week to get in an early workout, she had no idea she would bear witness to a scene that would strike chords in her heart.

Fortunately, she had her phone with her, so began to film.

Her subsequent Facebook post, wherein it was explained that two firefighters had scaled 110 stories on the StairMaster – and then back down – while dressed in full firefighting gear quickly went viral. More than 200,000 people liked her video and more than 420,000 people shared it.

They started at 8:46am. Two firefighters at my gym walking all 110 stories of the World Trade Center and back down in…

According to the National Fallen Firefighters Association, the tradition started in 2005 when give Colorado firefighters met up at a high-rise building to climb 110 flights in a bid to pay tribute to their fallen brethren. Dubbed the “9-11 Memorial Stair Climb”, it’s since become popular with service men and women up and down the country.

As the popularity of Chelsea’s video shows, no one will forget 9/11, and nor should they. Such a day needs to be remembered, so that we can aim to prevent it from ever happening again. Not only that, though, but it needs to be remembered for the immortally brave actions of the men and women who lost their lives that day trying to save others.

We take our hats off to firefighters all over America. Without your heart and courage, the world would be a much more frightening place.