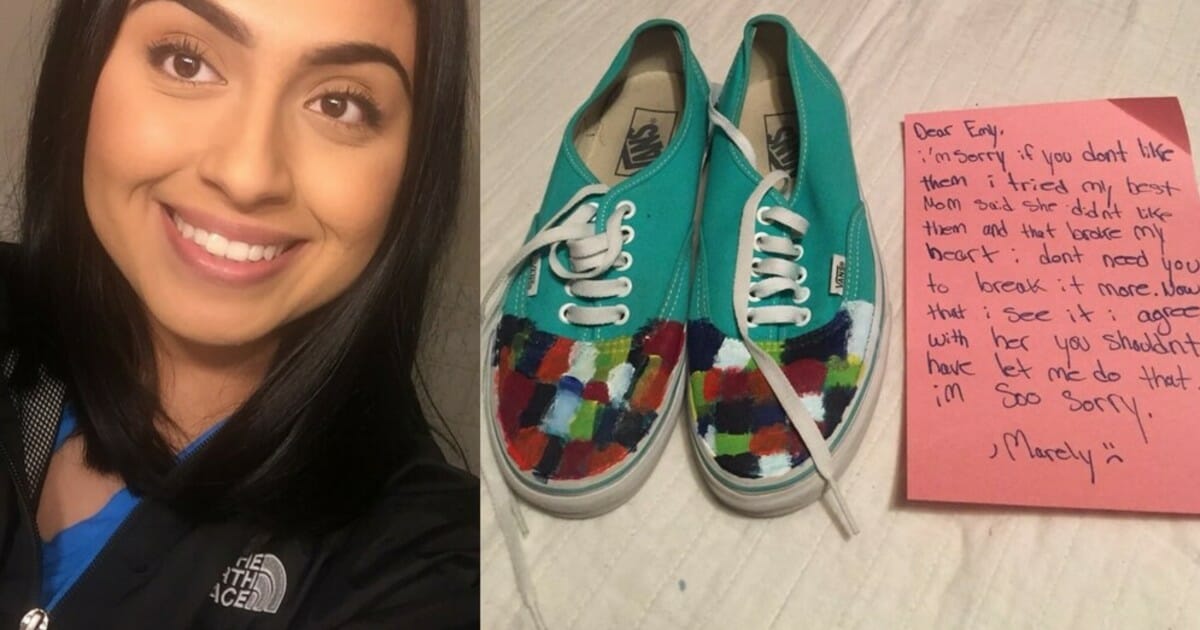 Sometimes the internet is the WORST place to go when you’re in need of a confidence boost, and other times it’s exactly what you need.

Emely Cifuentes had asked her little sister Marley to paint a pair of her Vans sneakers, but when Marley returned the sneakers the project was unfinished.

She also attached a note.

“Mom said she didn’t like them and that broke my heart. I don’t need you to break it more.”

Seventeen-year-old Emely shared the image of her painted Vans on Twitter, she has since protected her tweets, explaining that she asked her 10-year-old sister to paint her sneakers.

She knew Marley wanted to be an artist so she wanted to provide her with a very special canvas.

Marley painted the sneakers, but only halfway. Apparently the girls’ mother discovered the 10-year-old painting her older sister’s shoes and put a stop to it.

“Now that I see it I agree with her you shouldn’t have let me do that. [I’m] soo sorry,” the young girl wrote in a note to her sister.

“I’m literally crying because I love them so much and it sucks how much your parents affect u when they’re not supportive,” Emely wrote in her original tweet.

Emely shared the heartbreaking story on Twitter, and the internet stood behind Marley and lifted her spirits. At least one Twitter user even attempted to recreate Marley’s work of art, while others asked for personalized sneakers designed by Marley.

Dear Marely,
I hope I got the technique right. These are some DOPE shoes! Keep up the good work!
❤️ Hannah ? pic.twitter.com/DKBge5pFPE

In the end it turned out it was all a misunderstanding.

Emely spoke to her mom and learned that their mother thought Marley took the sneakers without Emely’s permission.

“My mom always tries to support us in what we do, but of course sometimes it feels otherwise. Since her opinion is the one that matters most to us, it’s easier to get us feeling down,” the 17-year-old told Yahoo Lifestyle.

Once Emely’s tweet went viral, she said that Marley felt encouraged by everyone’s kind words to make more art. But her first order of business was to finish Emely’s sneakers, which Emely said she planned on wearing.

The teen knew her little sister wanted to be an artist when she grew up. So she gave her a pair of her sneakers and…

It’s important to realize how much of an impact a parent’s words can have on a child. Even though Marley’s mother didn’t mean to discourage her daughter from showcasing her talent, her comments caused Marley to doubt herself.

Thankfully the internet was there to boost her confidence and Marley finished what she started.

Pass this article on to show that you support Marley!