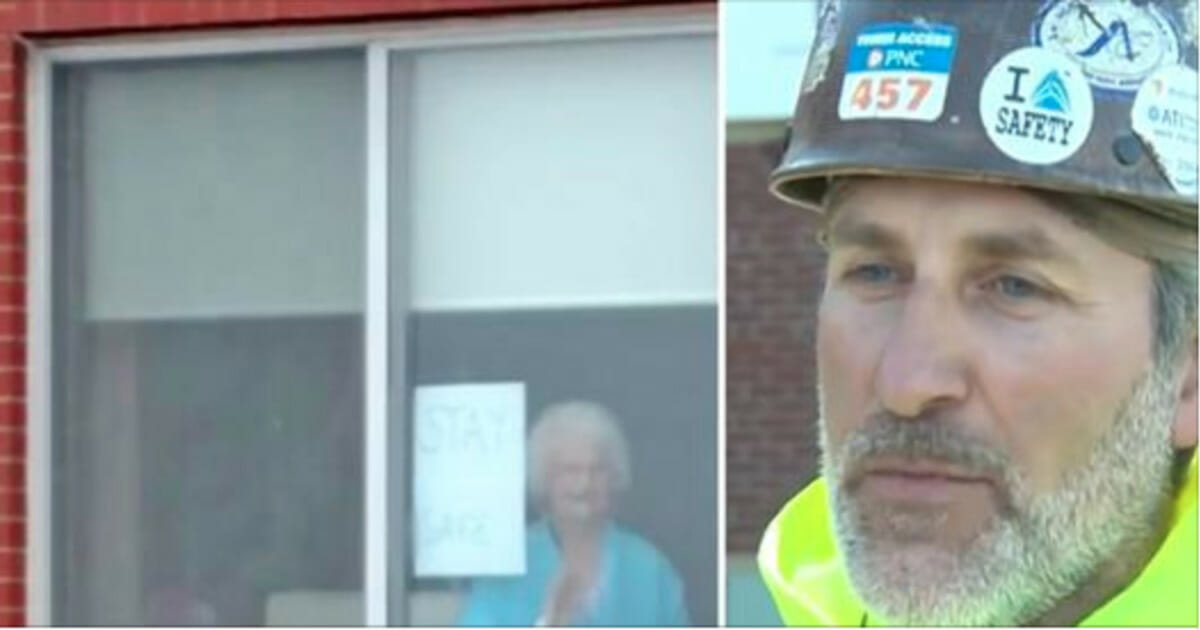 88-year-old Gloria Porter from Pennsylvania was admitted to Excela Frick Hospital with health problems. Anyone whose ever spent time in a hospital knows it’s not exactly a fun place to be. Time seems to drag while you’re there, not to mention the fact you’re usually in some measure of discomfort anyway.

To pass the time, Gloria would often sit and watch the ongoings of the world through her hospital window. A new entrance was being built outside, and several construction workers were on site. Watching them whilst they worked provided some mild entertainment for Gloria, who otherwise didn’t have much to occupy her attention.

On one particularly cold and snowy day, Gloria began to grow concerned for the safety of the workers as they bravely clambered over steel beams.

One of the men, Jeff Reick, had already noted Gloria over the course of several days. He would wave to Gloria, and she would waved back. One day, she looked closer and saw that he had written something in chalk on one of the steel beams. “Get well”, it said.

“I saw the lady in the window looking out, and I just thought it would be a kind gesture just to tell her to get well,” Jeff told Pittsburgh’s Action News.

And Gloria did not let that gesture go unnoticed.

Keen to reciprocate Jeff’s kind words, Gloria created her own message: “Stay safe” she wrote on a paper, then put it up in her window.

When Jeff saw the note, he turned to his colleague in surprise. “Do you see that?” he asked.

Jeff was blown away by the note, it was just what he and his colleagues needed to hear on that cold and windy winter day. Safety is something they always take very seriously.

That same day, a stranger presented Jeff and his colleagues with an envelop. It included lunch money for everyone – another gesture that warmed the men on that cold day.

It’s amazing what a few kind words can do.