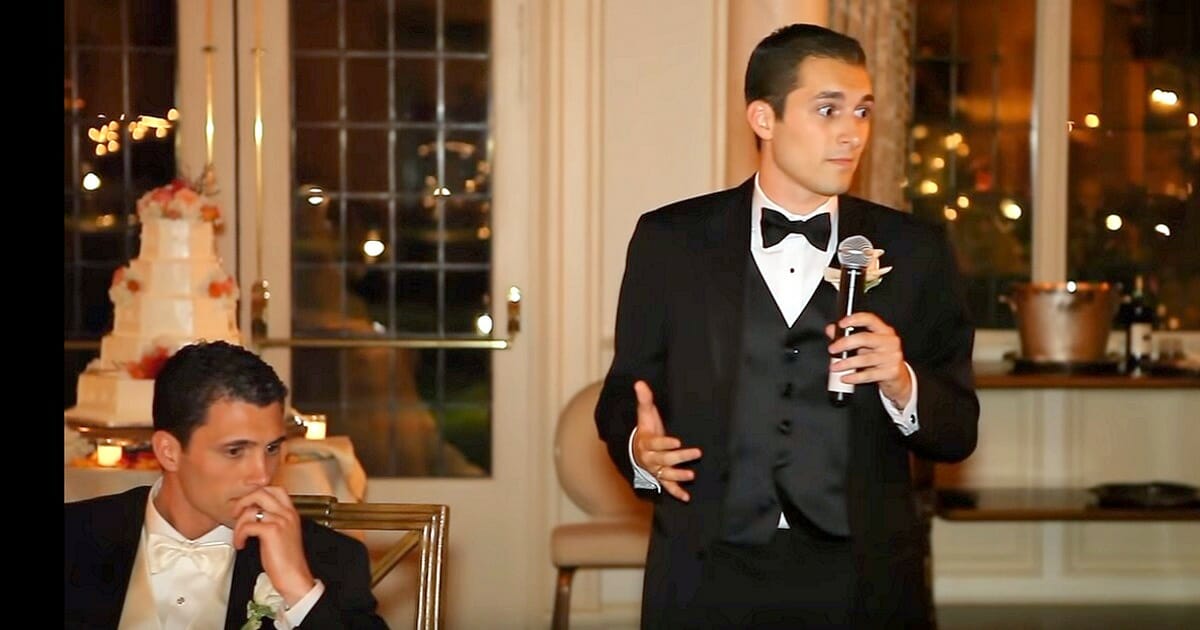 Weddings are always a joyous occasion.

Showcasing the purest essence of love and devotion, they’re occasions we all look forward to. Never is this truer than when you’re a member of either the bride or groom’s inner family.

So it was when one groom, George, sat beside the love of his life and waited for his best man – his brother, Anthony – to deliver a speech. Anthony was obviously taking his duties seriously, and had prepared cue cards to guide him. It turned out he didn’t need them, though … Anthony was about to steal the show.

The video of Anthony’s speech has since been watched over one million times online – suffice to say it’s a good example of how to nail your best man duties.

But just what was it that managed to make people cry, laugh, and want to share it with others?

Well, Anthony shared a few stories with the attending guests, mixing the embarrassing with the humorous, as is so often protocol when you’re the best man.

It was one set of anecdotes in particular that helped his speech become the viral sensation it has, though. It began with Anthony explaining that he knew the moment when George had fallen in love.

“That moment came for George 25 years ago when he met me,” Anthony said.

He then went on to acknowledge what George picking him for best man had truly meant: “he’s finally admitting to each and every one of you that I truly am the best.”

What’s more, Anthony revealed how George – being a lot bigger than himself – was forbidden from hitting him when they fought as youngsters.

“So, I used to take advantage of that and I would torture him all the time, so I apologize for that after all these years. But we did have our good times, playing football on the backyard, playing hockey upfront with Jessie and Jamey or when we would turn the basement, put up little obstacles and play American gladiators with our NERF guns. It’s memories like this with my big brother that I’m never going to forget.”

For his coup de’ grace, however, Anthony saved the best for last.

“I remember one night we went out to dinner and we were driving around afterwards and smiling, having a great time. And at that moment, I knew Nicole was going to be around for a long-haul. She made my brother happy in a way that I hadn’t seen him smile like that in a while. I can honestly say Nicole that I think you just maybe the reason why George and I are as close as we are now. The last four years our relationship and our brother had got tighter. We do still fight of course but for different reasons. We fight hard because we love harder.”

“I just want to let you know that I’m always on your side. I am now and I will always be your biggest fan,” he concluded.

Watch the fantastic speech in the video below:

What a great speech. It had everything!

If this put a smile on your face, share this article on Facebook and spread the love.