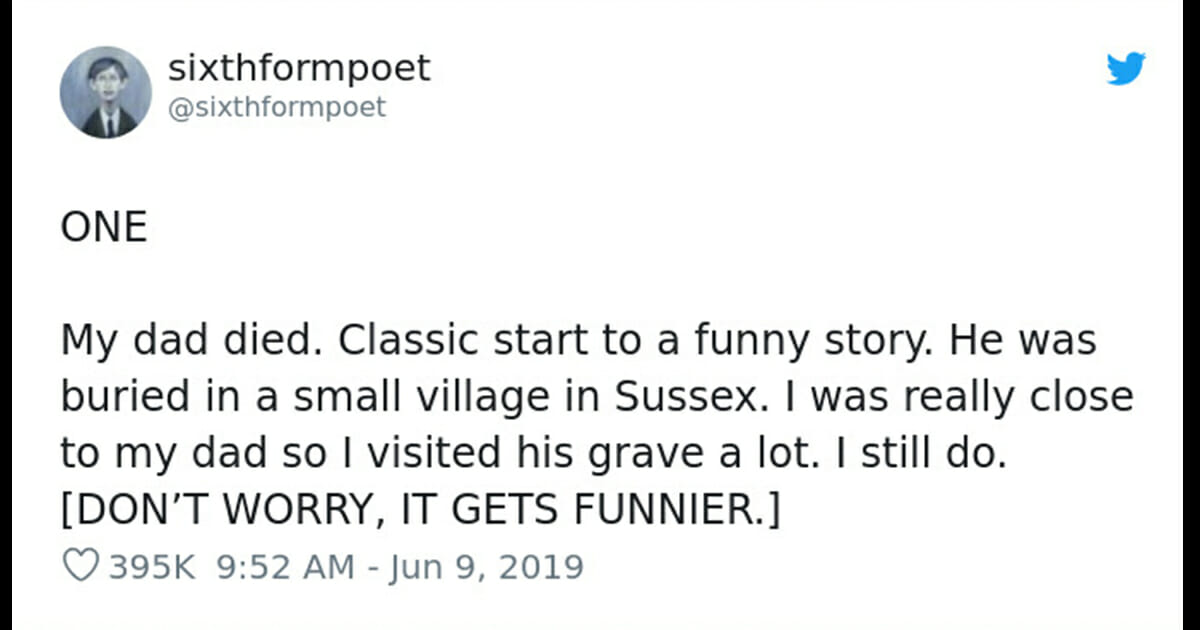 Love is something that’s perfectly unique to every one of us.

One of the most beautiful components of this fabulous, terrifying, all-consuming phenomenon, is that no one can really prepare you for it, nor tell you what to expect when it comes. It just happens, when it will, and if you’re lucky you’ll find yourself wrapped in a bubble of storybook pleasantness.

Of course, there are those love stories that reach out and touch us all, those that resound across society for one reason or another, and make their way into our hearts despite having absolutely nothing to do with any of us. This is one of those.

It revolves around a man and how he met his wife, and is so crazily coincidental/random that it’s amassed a whopping 551,000 likes on Twitter. Read on below for the full story …

It all began back when our protagonist, Matt – who goes by the username SixthFormPoet – was paying a visit to his father’s grave. He realized that the grave next to his dad’s never had any flowers on it, so after a time began to buy his own flowers for the mystery person.

A few trips to the florists later, and Matt had garnered sufficient interest in the deceased man that he decided to Google his name …

My dad died. Classic start to a funny story. He was buried in a small village in Sussex. I was really close to my dad so I visited his grave a lot. I still do. [DON’T WORRY, IT GETS FUNNIER.]

Nice but I felt bad for the guy buried next to my dad. He NEVER had flowers. Died on Christmas Day aged 37, no one left him flowers and now there’s a pop-up florist in the grave next door. So I started buying him flowers. I STARTED BUYING FLOWERS FOR A DECEASED MAN I’D NEVER MET.

I did this for quite some time, but I never mentioned it to anyone. It was a little private joke with myself, I was making the world a better place one bunch of flowers at a time. I know it sounds weird but I came to think of him as a friend.

I wondered if there was a hidden connection between us, something secretly drawing me to him. Maybe we went to the same school, played for the same football club or whatever. So I googled his name, and ten seconds later I found him.

His wife didn’t leave him flowers BECAUSE HE’D MURDERED HER. ON CHRISTMAS DAY. After he murdered his wife, he murdered her parents too. And after that he jumped in front of the only train going through Balcombe tunnel that Christmas night.

I felt terrible for his wife and her parents. Now, I wasn’t going to leave them flowers every couple of weeks for two and a half years but I did feel like I owed them some sort of apology.

I found out where they were buried, bought flowers and drove to the cemetery. As I was standing at their graves mumbling apologies, a woman appeared behind me. She wanted to know who I was and why I was leaving flowers for her aunt and grandparents. AWKWARD.

I explained and she said ok that’s weird but quite sweet. I said thanks, yes it is a bit weird and oh god I ASKED HER OUT FOR A DRINK. Incredibly, she said yes. Two years later she said yes again when I asked her to marry me because that is how I met my wife.

Unsurprisingly, the Twitter world took to Matt’s story and spread it around like it was made of gold. At the time of writing, the thread has over 550,000 likes on Twitter, not to mention the fact that half of the people reading it are calling for it to be turned into a movie.

Indeed, it’s a small slice of happiness for anyone who wants a little chuckle today. Bless you, Matt, for trying – and kind of failing – to do the right thing.

What did you think to Matt’s story? Let us know in the comments box below.