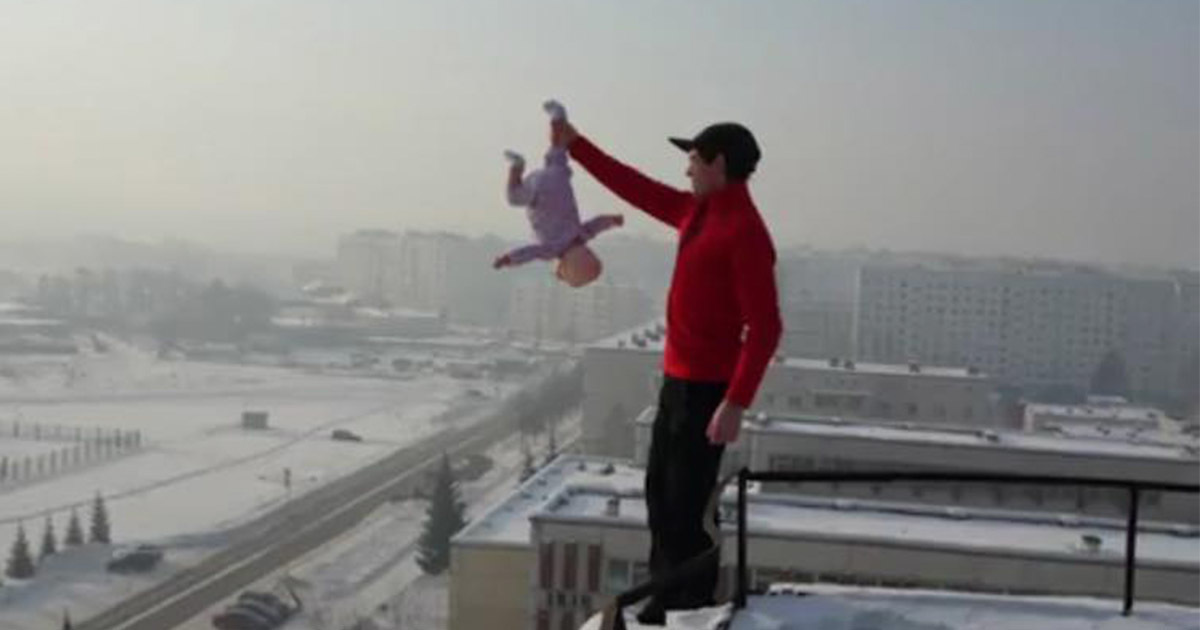 For many people, having children is the best thing that has ever happened to them.

And as parents, we try to do everything we can that’s in the best interest for our child, whether making them feel happy or making sure they are healthy.

These days, parents are much more careful when it comes to the safety of their child than they were back in the day. Things like strollers, car seats and certain toys are often thoroughly checked and tested before being used to make sure they don’t harm the child in any possible way.

It seems however, that some people who do have children do not quite realize that they are responsible for the life of another vulnerable human being. This man is one such person.

Roman Afanasyev, a Russian father of two, is an adrenaline junkie. He often puts himself in dangerous situations just for the thrill of it.

It’s plain stupid and irresponsible to put your life in jeopardy for fun, but to do so with your child is just cruel, despicable and infuriating.

In the picture below, you can see Roman holding his oldest daughter by just one leg and dangling her upside down from the edge of the roof of a high-rise building. This makes my blood boil.

In a separate video circulating on Facebook, the father is seen driving at full speed while holding his baby daughter out of the window with one arm. Unbelievable.

When confronted by the police, Roman first claimed that the stunts were made using a doll — but eventually he confessed it was in fact his daughter.

“He did not explain his actions,” Olga Shimanskaya, an investigator of the case, told the Siberian Times. “He only stated that he controlled everything and did not put the child at risk.”

Roman usesIt’s his oldest daughter, born in 2015, in his pictures and videos. The younger daughter, who was born this year, seems to have so far been able to avoid being a part of her dad’s violent and heartless stunts.

Roman is currently on trial for his acts and if he is convicted he could face up to three years in prison.

It’s unfathomable that adults can behave this way and put their own children through such barbaric and cruel actions. This man should not be allowed to have custody over his daughters.

This is an unpleasant story but we feel it’s important that people are aware that cruelty towards young children happens everywhere and all the time.

Below is the video of Roman holding his daughter out of the window while driving. Waning: Some readers might find the images distressing.

Please consider sharing this story to shed light on this subject and if you believe that this man should be held accountable for his actions.