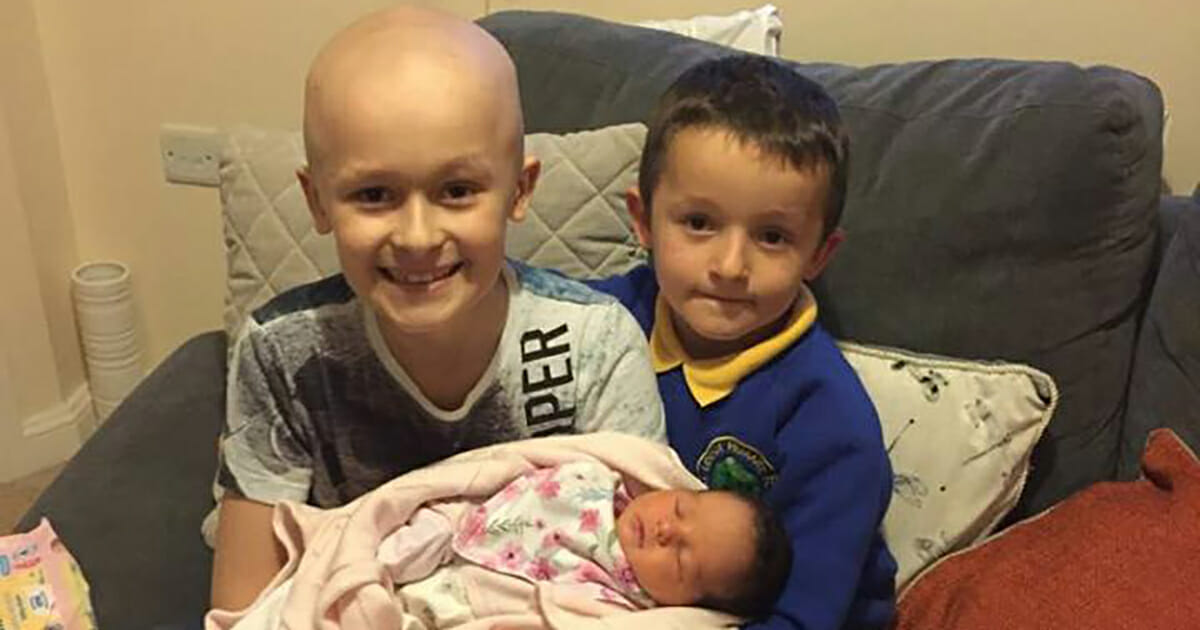 Bailey Cooper was a young boy like any other, until the day doctors diagnosed him with an aggressive form of cancer, non-Hodgkin’s lymphoma.

Immediately, his life was turned upside down, replaced by constant visits to the hospital and rounds of chemotherapy.

Despite that, Bradley remained positive and upbeat throughout all the trials and tribulations – he was a ray of sunshine in an otherwise terrifying time for his family.

In February 2017 there was good news. Bradley’s cancer was gone and he could return to school. His life would finally begin to have a semblance of normality.

In a cruel twist, however, by Easter 2017 the family were called to the hospital for a conversation that would shatter their hearts.

A routine checkup had discovered that Bailey’s cancer had returned.

Once again, the 9-year-old fought admirably against the odds, all the while battling the disease with a courage reserved for the very hardiest of types.

Then, once more came good news when results were positive; the cancer was gone again.

The family was so proud of their little boy. They crossed their fingers and hoped that this would be the last time cancer would ever impact their lives.

In August 2017, however, mere months after being cleared, the family were given a hammer blow. The cancer had returned for a third time, and the forecast was bleak indeed.

“Rachel took him into hospital, and they said to get me in,” Bailey’s dad Lee said, according to the Bristol Post.

“I got out of work and came immediately. I was thinking about what the doctors had said before when they said if the cancer came back, there was nothing else they could do.

“She [the consultant] broke the news to us. It was late Stage Four, and it was even worse. It was very aggressive.”

Step 4 is the stage where cancer has spread throughout a patient’s body. The chances of successful treatment are significantly diminished by that point.

The doctors discovered tumours in little Bailey’s chest, lungs, liver and stomach. They gave him days, perhaps weeks, to live.

When Bailey was given the heartbreaking news, he was destroyed, but remained determined to fight on.

The reason? He wanted to meet his little sister, due to be born just a few months later. The family hoped and prayed that their boy would survive long enough to meet his sibling.

Against all odds, the little boy showed just what a fighter he was.

In November, he was allowed to hold his newborn sister in his arms. His parents even let him choose the little girl’s name: Millie.

“We didn’t think he would last that long, but he was determined to meet Millie. It got to the end of November, and Millie was born. He hugged her and did everything an older brother would do – change her, wash her, sing to her,” mom Rachel said.

Sadly, Bailey began to lose his strength shortly after Millie was born. His body weakened with each passing day, and steadily the cancer took hold.

The family dared to dream that they might spend Christmas together, so Lee and Rachel asked their son to write a Christmas list of presents he wanted.

In response, Bailey showed the same selflessness he had throughout his entire battle. Knowing he would never get the chance to play with them, he asked for toys his younger brother, Riley, would benefit from.

Just before Christmas, 2017, friends and relatives made one last trip to the hospital with Bailey.

When his grandmother arrived, she cried and told him that she wished she could take his place instead. Bailey simply answered: “That is really selfish Nan. You have grandchildren to take care of.”

Eventually, the cancer spread to Bailey’s brain. After five painful days of radiation therapy, the brave boy told his family that he knew it was soon to be his time.

“I want to stay but it’s my time to go, to become her guardian angel,” he said.

On December 22, 2017, Bailey gave his final farewell. His family sat by his side as the little boy slowly stopped breathing.

“We sat there hour by hour, watching him slip away. We read him stories, and listened to his favourite music,” Rachel recalls.

“The moment we said ‘stop’, he took his last breath and had just the one tear come out of his eye. It was peaceful.”

His family obviously remains heartbroken by his loss, but they find comfort knowing that their boy is finally resting in peace.

“We are numb, but in a way also happy he is no longer in pain,” Lee said.

Now, they are determined to fulfil their son’s wishes and listen to his last instructions.

“He told us in our last family meeting,” Rachel adds. “‘You’re only allowed to cry for 20 minutes. You have to take care of Riley and Millie.’”

Bailey’s story is both heartbreaking and tragic, but his courage, strength and positivity through pain and anguish continues to inspire people throughout the world.

Although his family is devastated, they know that his bright memory and cherished legacy continue to live on.

Were you also touched by Bailey’s courage, positive attitude and strength? Please share this so that his legacy continues to survive!