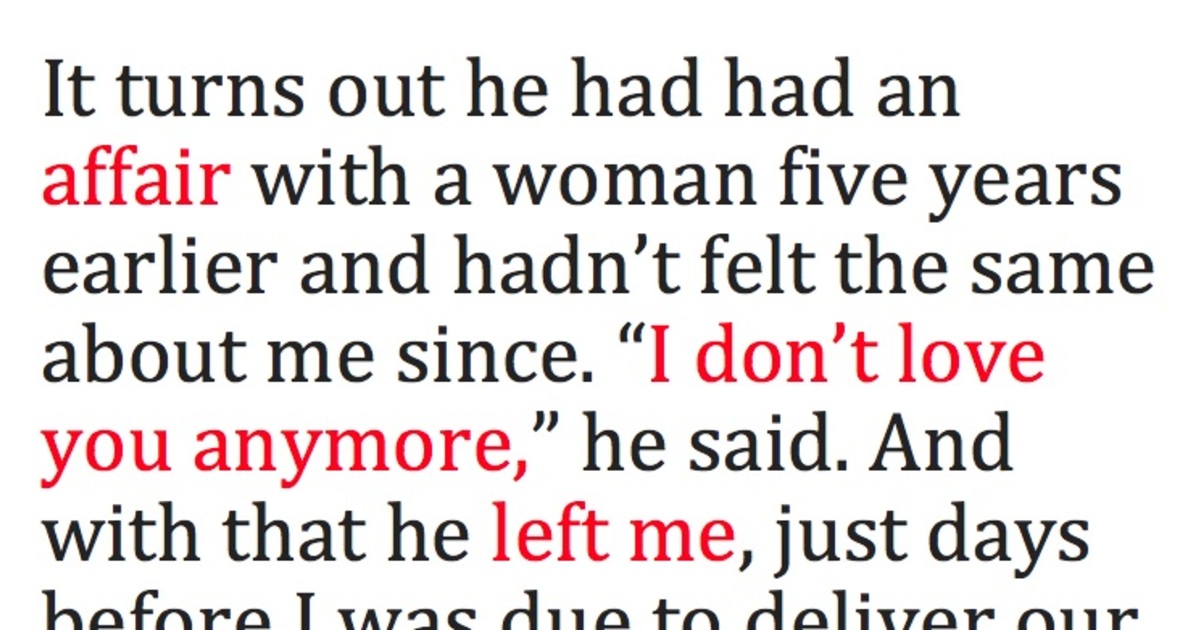 I cried. Moments after reading the last words of this text, I am still shaken by its profoundness, its beauty, its simplicity. Its truth. The story begins with a young woman, or perhaps we should say ‘wife’. Because that is essentially what she was, how she saw herself. Until one day, heavily pregnant, her wealthy husband was leaving her, and her world was shattered in a million pieces. The journey she describes will be easy to relate to. I feel like I know and understand every emotion, every word she writes. Perhaps that’s why this story moved me so deeply. If this story also affects you, make sure you share it with others. You never know who may be quietly suffering a similar predicament. We never know when we will see the light.

A new home, a swimming pool in the back yard, two nice cars in the driveway and my first child on the way. After nine years of marriage I had it all— or so I thought.

I was only days away from delivering my first child when a conversation with my husband shattered the world I lived in. “I want to be here for the baby, but I don’t think I love you any more,” he said. I couldn’t believe what I was hearing! He had grown distant during my pregnancy, but I had related it to his fear and concern over becoming a parent.

As I probed him for explanations, he told me he’d had an affair five years earlier and hadn’t felt the same about me since. Thinking only of my baby, and wanting so desperately to save my marriage, I told him I could forgive him for anything and that I wanted to work things out.

That final week before my son was born was an emotional roller-coaster ride. I was so excited about the baby, so scared that I was losing my husband, and feeling so guilty at times because I thought it was the baby’s fault that all this was happening.

T.J. was born on a Friday in July. He was so beautiful and so innocent. He had no idea what was happening in his mother’s world. He was four weeks old when I discovered the real reason for his father’s distance. Not only had he had an affair five years earlier, but he had started another affair during my pregnancy that was continuing. So T.J. and I left the new home, the swimming pool and all of my broken dreams behind when he was five weeks old. We moved into an apartment across town.

I sank to depths of depression that I hadn’t known existed. I had never before experienced anything like the loneliness of spending hour after hour alone with a newborn infant. Some days the responsibility of it all overwhelmed me and I would shake with fright. Family and friends were there to help, yet there were so many hours filled with thoughts of broken dreams and despair.

I cried often, yet I made sure that T.J. never saw me cry. I was determined this wasn’t going to affect him. From somewhere inside I always found a smile for him.

The first three months of T.J.’s life passed in a blur of tears. I went back to work and tried to hide from everyone what was going on. I was ashamed, though I don’t know why.

It was a Saturday morning when T.J. was four months old that I hit the bottom. I had just had yet another emotional discussion with my husband and he had stormed out of my apartment. T.J. was sleeping in his crib and I found myself sitting on the bathroom floor, curled up in a ball, rocking back and forth. I heard myself say out loud, “I don’t want to live anymore.” After saying it, the silence was overwhelming.

I believe God was there with me that day. After saying it, I sat there in silence for a while, letting the tears flow down my cheeks. I don’t know how much time passed, but from somewhere within me arose a strength I hadn’t felt before. I decided then and there to take control of my life. I was no longer going to give my husband the power to affect my life in such a negative way. I realized that by focusing so much of my attention on his weaknesses, was allowing those weaknesses to ruin my life.

That very same day, I packed a suitcase for T.J. and myself and we went to spend the weekend at my brother’s house. It was the first trip I’d taken by myself with T.J., and I felt so strong and so independent! I remember on the two-hour drive I laughed, talked and sang to T.J. all the way. It was during that trip that I realized what a savior my son had been to me all those months. Knowing that he was there every day and that he needed me had kept me going and given me a reason for getting out of bed in the morning. What a blessing he was in my life!

From that day forward, I forced myself to focus on the confidence and strength that had brought me up from the bathroom floor. Having changed my focus to such positive thoughts, I couldn’t believe the difference it made in my life. I felt like laughing again and I enjoyed being around people for the first time in months. I began the process of discovering the individual I had kept hidden inside myself for so long – a process I am still enjoying today.

I had entered counseling shortly after T.J. and I moved out of the house, and I continued in that counselling for several months after the day I felt I had hit bottom. When I no longer felt the need for her support and guidance, I remember the last question my counselor asked me before I left her office that day. “What have you learned?” she asked. I didn’t even hesitate in answering. “I’ve learned that my happiness has to come from within.”

It is this lesson that I am reminded of every day and that I long to share with others. I had made the mistake in my life of basing my identity on my marriage and all the material things surrounding that relationship. I’ve learned that I am responsible for my own life and happiness. When I focus my life on another person and try to build my life and happiness around that person, I’m not truly living. To truly live I need to let the spirit within me be free and rejoice in its uniqueness. It is in this state of being that the love of another person becomes a joy and not something to be afraid of losing.

May your spirit be free and soar high!

This story is an excerpt from the book Chicken Soap For The Woman’s Soul.