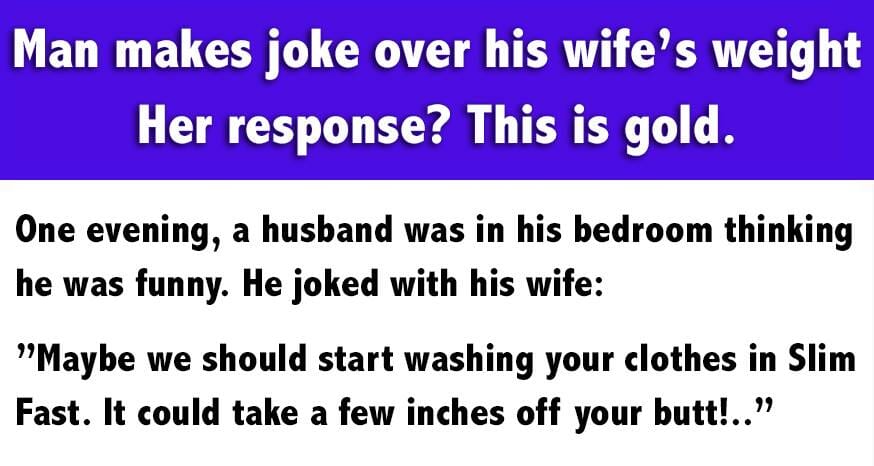 He who laughs last, laughs longest is an old proverb. And yet it’s one that still rings just as true today as the day it was first said.

As for this story, it’s obvious who gets the last laugh … at least if you read all the way through to the last line.

There are plenty of reasons you shouldn’t joke about the weight of a woman. Here’s one that should jump right to the top of your list …

One evening, thinking he was funny, he told his wife:

‘Perhaps we should start washing your clothes in Slim Fast. Maybe it would take a few inches off of your butt!’

For obvious reasons, the wife wasn’t particularly pleased with her husband’s choice of ‘joke’. She thought it was idiotic. After all, who was he to complain about her weight?

She bit her tongue all the same, deciding she wasn’t going to say anything stupid back. It was evening and it wouldn’t be long before they were going to sleep.

At the same time, she’d come to the decision that she couldn’t let the comment go entirely unpunished.

The next morning, the man got up as usual and took some underwear from his drawer.

Soon after, however, he realized something was different.

‘What the Hell is this??’ he muttered to himself.

A cloud of dust appeared as he shook his underwear out.

‘April,’ he yelled from the bathroom.

‘Why did you put talcum powder in my underwear?’

’lt’s not talcum powder,’ she replied with a snicker. ‘… lt’s ‘Miracle Grow’.