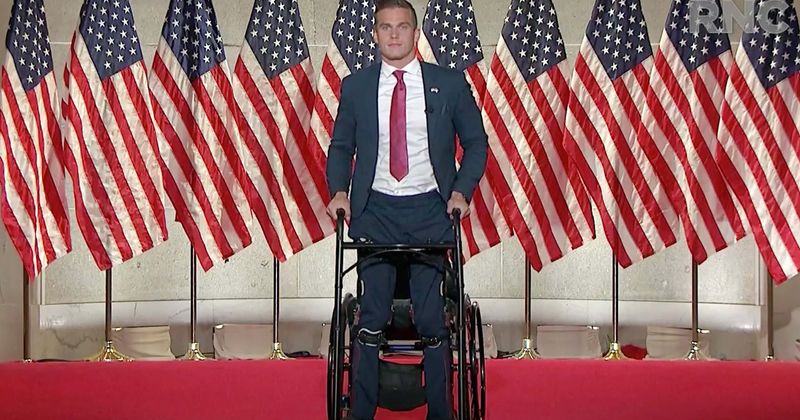 Madison Cawthorn, the candidate vying to be a House representative aged just 25, has pledged to never kneel before an American flag and disrespect it.

The North Carolina candidate, a proponent of the GOP, recently spoke in a new campaign video, telling viewers he would refuse to kneel for any issue. He said: “To be born an American is a gift from God,” adding, “They kneel to those who want to hollow out our middle class, destroy our businesses, open our borders and close our schools.

“I’m tired of being represented by cowards who kneel.”

Cawthorn’s comments were chiefly aimed at the recent movement that has seen athletes kneeling during the national anthem in protest against police brutality in the U.S. The 25-year-old even went as far as to criticise those lending support to the Black Lives Matter movement.

In the video, shot on a football field, Cawthorn states: “I was raised to be a patriotic American, to honor our men and women in uniform, to memorialize who gave their lives to make America the greatest country on earth.

“To be born an American is a gift from God. Living under this flag is a blessing no matter who you are or where you come from.

“I am proud to be an American, and because I’m proud, I stand,” he said.

As per reports, Cawthorn was left partially paralyzed from the waist down after a car accident seven years ago. Aged just 18, he was wheelchair-bound.

Yet the 25-year-old forced himself to stand during a Republican convention in Washington DC last month.

“For which I stand, one nation under God, with liberty and justice for all.”

Cawthorn is currently running for the 11th Congressional District seat in western North Carolina, a role previously held by Mark Meadows, who went on to become Donald Trump’s Chief of Staff.

If Cawthorn is successful, he’ll become the youngest member of Congress, taking that honor from Democratic Rep. Alexandria Ocasio-Cortez of New York.

Well, his is certainly a strong stance, but the U.S. was built on powerful figures with unerring visions. What do you think about Madison Cawthorn? Let us know in the comments box below.

Meanwhile, share this article on Facebook if you think he’s an inspirational figure, and sure to be a good leader.