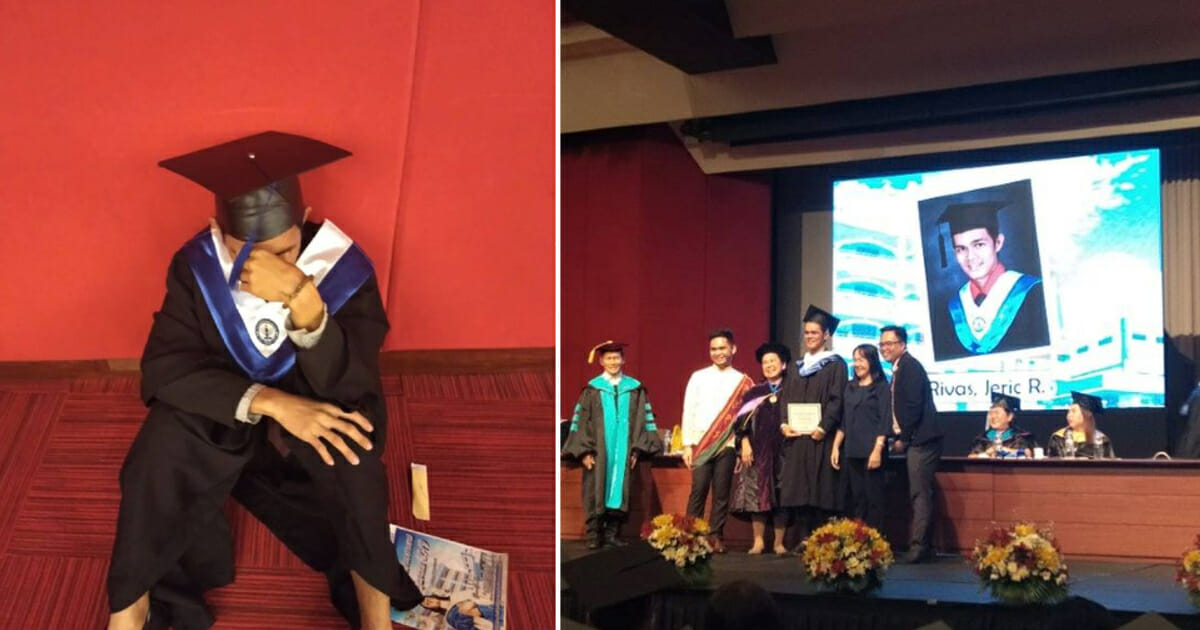 Graduation is supposed to be a time of celebration with your family, friends, and peers. The only tears shed during graduation should be tears of joy because after so many years of hard work you’ve finally earned your degree.

Unfortunately, that wasn’t the case for Jeric Rivas. He described his college graduation as a day of “mixed sadness and fun” because though he would receive his diploma alongside his classmates, he was, yet again, going to miss out on celebrating the day with his family.

“I felt a lot of sadness and fun earlier today on my graduation day,” a translation of his post reads. “Sad because I remember again what happened when I was in elementary school and high school.”

Jeric recalled that when he was in elementary school he had earned an award. A family member was supposed to present him with the medal, but no one showed up. So, he didn’t go on stage to accept his award.

He encountered the same issue not too long after, but this time he borrowed his friend’s parents to act as a stand-in. It was heartbreaking, but he wanted to be recognized for his hard work.

Despite the lack of support from his family, Jeric remained positive and continued to work at his studies. In order to attend college he had to move away from home and work several odd jobs. Even though he may have needed to work harder and with less support than his peers, that didn’t stop him from pursuing a degree in criminology at La Concepcion College.

Finally, the day arrived for Jeric to graduate. On a day he was supposed to be excited, he found himself in tears because once again it appeared as though his family had disappointed him.

“I just felt that my tears were dripping, I just sat on the side,” he wrote. “I feel jealous.”

As his classmates walked on stage to receive their diplomas, Jeric worried he would be alone, again. But as he went up on stage, one of his professors came to the rescue. The two exchanged hugs and Jeric received his diploma with someone who supported him by his side.

In his Facebook post from 2019, Jeric thanked everyone who helped him throughout his school years, including his family.

Having some type of support system is crucial, no matter what you’re doing. Even though Jeric’s family expressed little to no interest in supporting him in his academic career, he was lucky to find a supportive system at school.

Share this article on Facebook to show Jeric that even though his family might not support him, you stand with him and will cheer him on with whatever he chooses to pursue next!