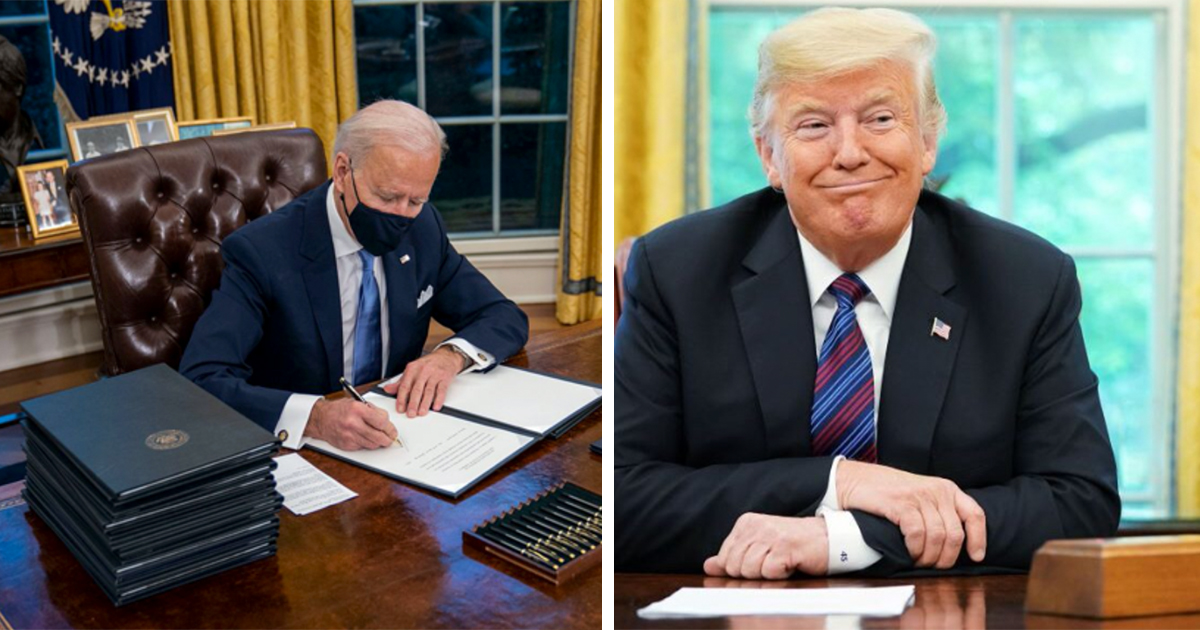 Joe Biden has wasted little to no time in making changes following his inauguration as the 46th president of the United States.

Yesterday it was reported that he signed a raft of executive orders during his first day in office, including rejoining the Paris agreement to help the world fight climate change, and instructing his administration to rejoin the World Health Organization, which Donald Trump had left.

Well, photos of Biden working from behind the famous Resolute Desk have now emerged, with certain respected journalists noting that the new president has already removed his predecessor’s ‘Diet Coke button’.

Yes, for those that don’t know, Trump reportedly had a button his desk specifically used for when he wanted to drink Diet Coke, which is his beverage of choice.

Several political journalists have confirmed that the box was, in fact, real, while it’s said that when Trump pressed the button a staff member would appear bearing a Diet Coke on a silver platter.

Associated Press journalist Julie Pace provided the somewhat strange tit-bit of information after a 2017 interview with the then-POTUS.

“Midway through my interview with President Donald Trump, he reached over and pressed a red button on his desk in the Oval Office.

“It didn’t trigger a nuclear launch or send advisers scurrying into the room.

“Instead, a White House butler walked in with a single glass of Diet Coke on a silver tray for the commander in chief.”

Well, the times they are a-changin’, and Biden is said to have gotten rid of the magic button with all haste – perhaps he’s just not that fond of Diet Coke.

Tom Newton Dunn of Times Radio, tweeted of the news:

“When @ShippersUnbound and I interviewed Donald Trump in 2019, we became fascinated by what the little red button did.

“Eventually, Trump pressed it, and a butler swiftly brought in a Diet Coke on a silver platter. It’s gone now.”

In any case, that will certainly not be the last change the new president makes. After four years of tumult under Trump, Biden has made it clear that he will be overseeing a transitional period in the history of the United States.

Do you think Biden will positively change things in the U.S. after all the recent chaos? Let us know in the comments box below.

Meanwhile, share this article on Facebook if you believe that America will be a safe and stable country for the next four years.