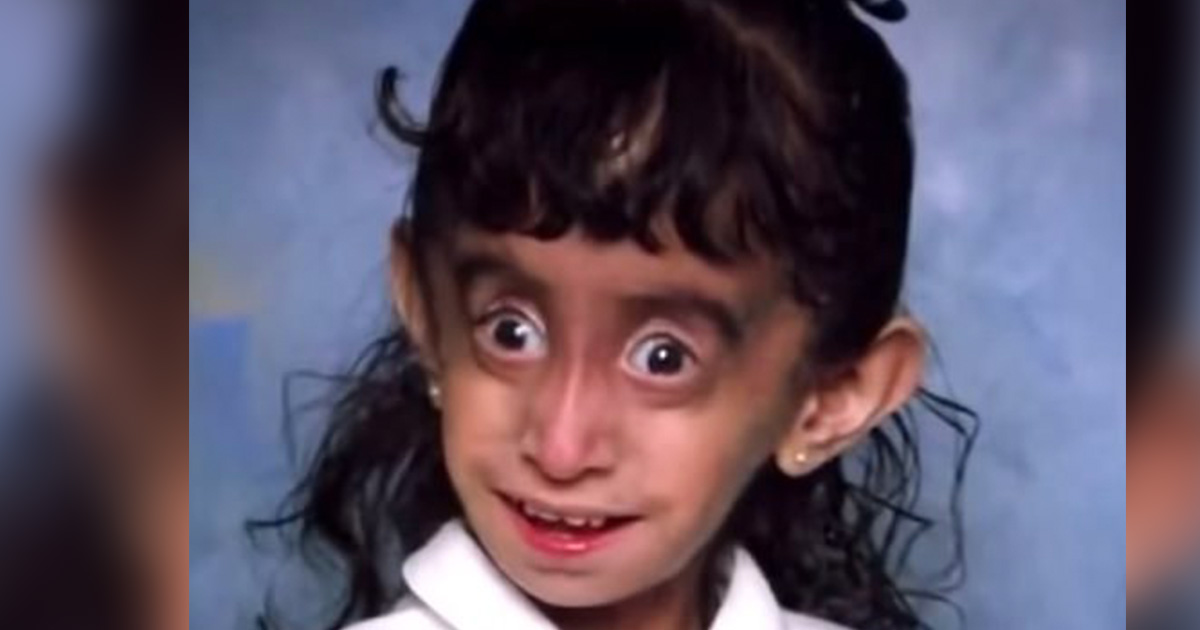 Every person faces their own struggles where it comes to their looks and/or self esteem.

It might be that you want to lose weight, or maybe you want to fix your teeth? There’s always something that you’d probably like to improve.

Well, every time I feel like I need motivation, I’ll always think about Lizzie Velásquez from Austin, Texas.

Lizzie was born with an extremely rare genetic disorder that prevents her from gaining weight, which in turn affects her appearance. She’s been mocked ever since kindergarden, through high school, and faced an onslaught of hate on the web at the age of 16.

Being tormented can break any person’s heart and mind, but Lizzie was confident that these people wouldn’t be the ones prevailing. Today, she’s turned her life around as an anti-bullying activist, as well as a global motivational speaker.

Now, I want you, the person reading this, to take a moment to think back on your life at the age of 16. For me, there are plenty of memories from that time – both good and bad – but overall, it was a time when many things were changing. There were more hormones, emotions and sometimes even mental challenges that you had to fight against.

Hate on the web

All in all, hopefully it was a good time in your life, as it was for me.

How would that make you feel?

For Lizzie Velásquez, this was the tragic reality. She was mocked throughout her school years – both in person and on the internet – and it could’ve so easily broken her.

But Lizzie had other plans. She decided to put all these horrible, negative vibes together and instead turn them into something positive. That’s why we love her dearly, and want to spread her inspirational story.

I will share this with my friends, and I’d love for you to do the same.

At her birth, she weighed only 2 pounds and 11 ounces, and it was clear from the moment she was born that she looked different from the other babies at the hospital.

Being that small, Lizzie didn’t understand that she was different, since she’d always been just Lizzie. However, when she started kindergarden at age five, she realized straight away that something was off.

“To my family, I was just Lizzie. It was a big slap of reality for a 5-year-old. The other kids were scared of me, pointing at me, not wanting to sit with me,” she told Today. “I couldn’t process it. I wasn’t doing anything to them, so why was it happening to me? And I didn’t dare tell anyone.

“Finally, I told my parents and they said, ‘There is nothing wrong with you, you are just smaller than the other kids. You are beautiful and smart and can accomplish anything.'”

Those words from her family still stick with her today, and it really is the truth. No matter how you look, you still have the ability to accomplish anything you want. For Lizzie, though, this would require strong mental toughness to get there. That, and the support from her parents.

But we’ll get back to Lizzie and how she managed to come out strong and incredibly inspirational on the other side.

So what was it that made her look the way she does?

Well, Lizzie was born with two rare conditions, marfan syndrome and lipodystrophy. The rare genetic conditions affect her heart, eyes and bones, and prevent her from gaining weight because of a problem with the way fat is distributed in her body. It’s so rare, in fact, that there are only three known cases in the world. Still to this day, it baffles experts.

Not only that, but the condition causes Lizzie to age faster than people without the disorder, and she’s also blind in one eye.

As early as kindergarden, Lizzie was tormented by other kids. And the horrible torment from other children continued throughout her childhood, with people labeling her face as “disgusting”.

“At the time, I thought everyone looked like me. I didn’t recognize or tell that they didn’t look like me,” she told the Daily Mail.

When Lizzie started high school, things got better. She realized that she had power over her own life, and her decision was made clear.

She was always going to stay positive, be brave, and do all the activities that she wanted to do alongside her friends.

“It was scary, but I knew it would pay off,” Lizzie Velásquez explained. “I was staff writer for the school newspaper and took photos for the yearbook. I tried out for cheerleading. The uniforms were really cute and every time I wore it around the school, I felt like a superhero. I was more myself around my peers, the version of myself around my family.”

Things started to get better, and Lizzie’s confidence was great. Then, one day, her world collapsed.

While doing homework, she was scrolling on her computer and went onto YouTube. Suddenly, she saw a video about herself that would break her heart.

Someone had made a video about Lizzie, dubbing her “the world’s ugliest woman”. Worse, the video had millions of views, and some of the comments were truly terrible.

She couldn’t stop herself from reading the comments, with some people even saying that the world would be a better place if Lizzie took her own life. She read on, hoping that someone would come to her aid. Sadly, not a single comment did.

“Wanted to prove them wrong”

Lizzie felt like someone “was putting a fist through the computer screen and physically punching me.” She could barely believe what she was seeing.

It’s crazy to think about how thousands of people can sit behind their computers and torment a 16-year-old girl suffering from a severe illness. How do those people sleep at night?

This was the worst kind of hate, and it could’ve destroyed Lizzie. But once again, she picked herself up. In fact, she said that if she could, she’d send a thank you card and flowers to the person who created the video, because that video changed her life forever.

“I didn’t want to retaliate — it was a waste of time,” she said. “I just wanted to prove them wrong, I realized I could use it for the greater good.”

Lizzie was never going to let the haters win. She’d seen the worst possible things written and said about her, but still, she was determined to use it as fuel for the future Lizzie.

She continued on to college, and at 23 she earned a Bachelors Degree in communication from Texas State University.

In 2003, she was then invited to a TED Talk in Austin, and it went viral. Lizzie explained how hurtful the mocking had been, but at the same time, she wanted to give people another perspective, as she did for herself.

“For so long, I thought that what defined me was my outer appearance,” she said in the 2013 TED Talk, explaining that she used to fantasize about “scrubbing the syndrome” off her face.

“Something kind of clicked in my head,” she explained of the moment she saw that awful YouTube video. “Am I going to let the people who called me a monster define me? No, I’m going to let my goals and my success and my accomplishments be the things that define me.”

For most people, all this hatred would have been tough to endure. But Lizzie isn’t most people; she showed all her haters how strong she really is. Over the course of her entire life, she has been forced to eat a high-calorie diet frequently to keep her body’s energy levels up.

Today, she’s 31 years old and a successful business woman who travels the world to lecture others on her illness, as well as her life story.

“This is my purpose. This is what I’m meant to do for the rest of my life. I like to think that I’m not only telling my story, I’m telling everyone’s story,” Lizzie told the Daily Mail.

As of now, she has over 850,000 followers on her YouTube channel, and uses the platform to fight bullying, as well as give inspirational talks. Lizzie’s showed the haters that she’s stronger than them – and she’s much more successsful today than they will ever be.

“You are beautiful and smart and can accomplish anything,” Lizzie said her mother and father used to tell her.

“They loved me in the face of so many unknowns.”

Even though Lizzie is a strong, inspirational and, well, incredible person, this year’s been tough for many reasons.

The Covid-19 pandemic hasn’t helped, but she’s also getting picked on on social media, especially on the app TikTok. Lizzie was the subject of an image that people were looking at and reacting to.

And the worst part was that it was a mother that had used her photo to prank a child into thinking that Lizzie was the teacher for the next school year.

The importance of respecting

In July, it became a horrible trend among parents, where they did a FaceTime call saying that Lizzie would be the child’s next teacher.

Lizzie was hurt, obviously, and rightly so. What kind of parent would do this to another person? What message does it send to their children? That this kind of hate is OK? Lizzie herself said it encourages children to react in an unfavorable way regarding the way people look.

“When kids are in school or whether they are out in public, it’s crucial to teach them the importance of respecting someone who doesn’t look like them,” Lizzie said, in a video posted on her social media accounts.

“Showing them a video might be a joke, but it can be something that shows a child if my mom or dad thinks it’s funny then it must be okay for me to laugh at as well,” she says. “I take great responsibility in the fact that now is the time time to do all I can to speak up for those who might not have a voice or for those who don’t know how to use theirs.”

“I knew in my gut my photo was going to be used,” she added. “After dealing with things like this for a while now, I can sense when this might happen.”

Following Lizzie condemning the horrible videos, many children instead started posting videos where they said how beautiful Lizzie was. Once again, the haters had lost.

Lizzie has been praised all over the world for her courage throughout her life. She’s written a best-selling book about her life and even been praised by former First Lady Michelle Obama.

Beauty comes from within your heart and soul. Lizzie, you are beautiful! We think her story is deeply inspirational, and we think that everyone should read about her to understand that anything is possible.

Please, share this story with friends and family if you think Lizzie is an incredible person!