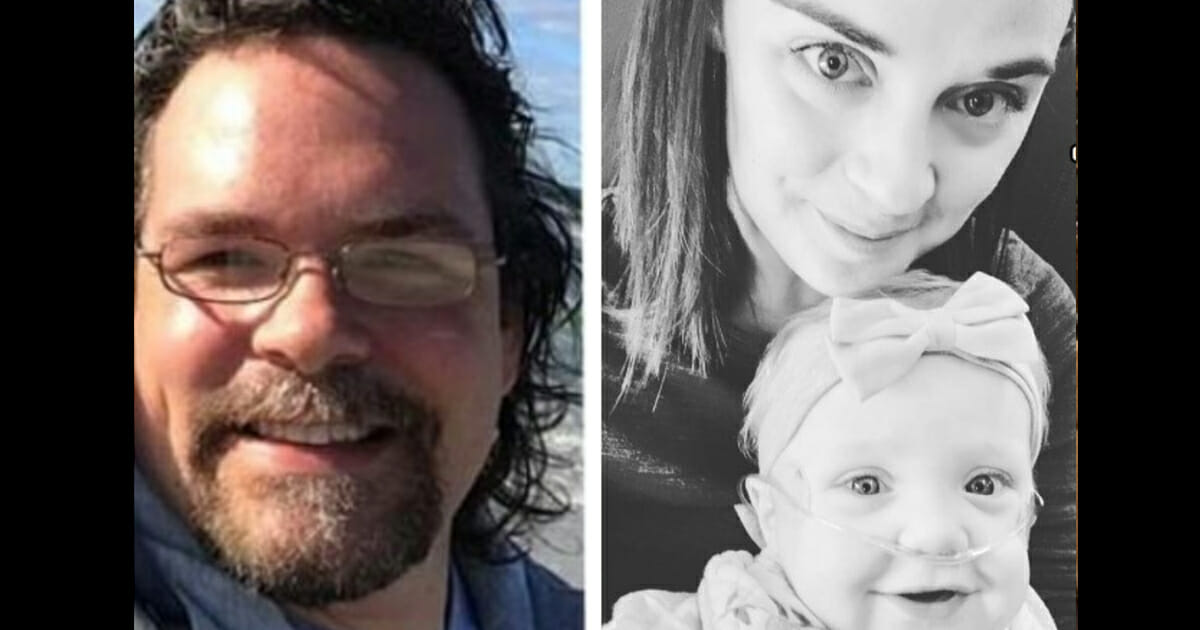 Anyone who’s ever boarded a plane with a young baby will know what a daunting experience it can be. Babies are unpredictable by nature, and a squalling, screaming child isn’t ideal when you’re in a confined space with a lot of strangers.

Even so, Kelsey Zwick couldn’t have predicted how one of her fellow flyers would react when boarding a flight from Orlando to Philadelphia with her 11-month-daughter Lucy.

She was on her way to Children’s Hospital (CHOP) with Lucy, who had been born 11 weeks premature with her identical twin sister Eva.

Kelsey hadn’t long sat down in her seat when a flight attendant approached her with a message from another passenger. His words would leave her in tears …

When little Lucy was born, she was blue and “very sick”. Coming into the world after just 29 weeks, she was suffering from severe chronic lung disease as a result of Twin to Twin Transfusion Syndrome – a direct complication of Kelsey’s pregnancy. She was placed on maximum support for her lungs shortly after being delivered.

It was some months later that Lucy and Eva could finally go home, having been forced to stay in the NICU. Even then, Lucy required oxygen around the clock for some time after.

As time passed, her need for the extra oxygen wained, though she was still reliant on it at night time and when flying. It was the latter point that became of instant interest to Jason Kunselman of Mechanicsburg, Pennsylvania.

An industrial engineer by trade, he was flying back home on his birthday after working in Florida. According to the Daily Mail, he had booked a first-class ticket for that reason, and was settling down to get ready for his journey when he spotted Kelsey and Lucy boarding.

He took note of Lucy’s oxygen machine, which couldn’t be put in the overhead lockers and so had to sit beside Kelsey for the entire ride.

Jason formulated a plan before calling over the flight attendant.

“We had smiles on our faces as we were headed to see her ‘friends’ at CHOP,” Kelsey explained in a Facebook post. “We pre-boarded the plane, got cozy in our window seat and made jokes to those around us about having to sit by my yelling-but-happy baby.”

It was then that a flight attendant approached and told her that the kind man in 2D was waiting to switch seats.

“You were giving up your comfortable, first-class seat to us,” Kelsey wrote in her post.

Indeed, Jason’s gesture touched Kelsey so much that she began to cry. “Not able to hold back tears, I cried my way up the aisle while my daughter Lucy laughed! She felt it in her bones too… real, pure, goodness. I smiled and thanked you as we switched but didn’t get to thank you properly. Sooo… thank you. Not just for the seat itself but for noticing. For seeing us and realizing that maybe things are not always easy. For deciding you wanted to show a random act of kindness to US.

“It reminded me how much good there is in this world. I can’t wait to tell Lucy someday. In the meantime… we will pay it forward. It was a gesture of someone saying, I SEE you and this is what I can do.”

“As I sat in the roomy seat, I couldn’t help but reflect. First, the long road on not knowing if we could have children of our own. We got pregnant and were diagnosed with TTTS, a rare complication. Overnight we had to fly across the country to get a fetal surgery when I was pregnant. We didn’t know if they would survive the procedure but these girls are fighters! They did amazing!”

As proven in Kelsey’s post, it’s acts like this that can so often have a ripple effect. A kindhearted gesture might not seem like much at the time, but it’s precisely these gestures that prove themselves to be huge in the long run. If all of us tried our best to be mindful, and do at least one kind thing every week, the world would be a better place to live in.

If you think more people should exhibit the compassion shown by Jason, share this article on Facebook.

Together, we can make this world a more comfortable place to live.