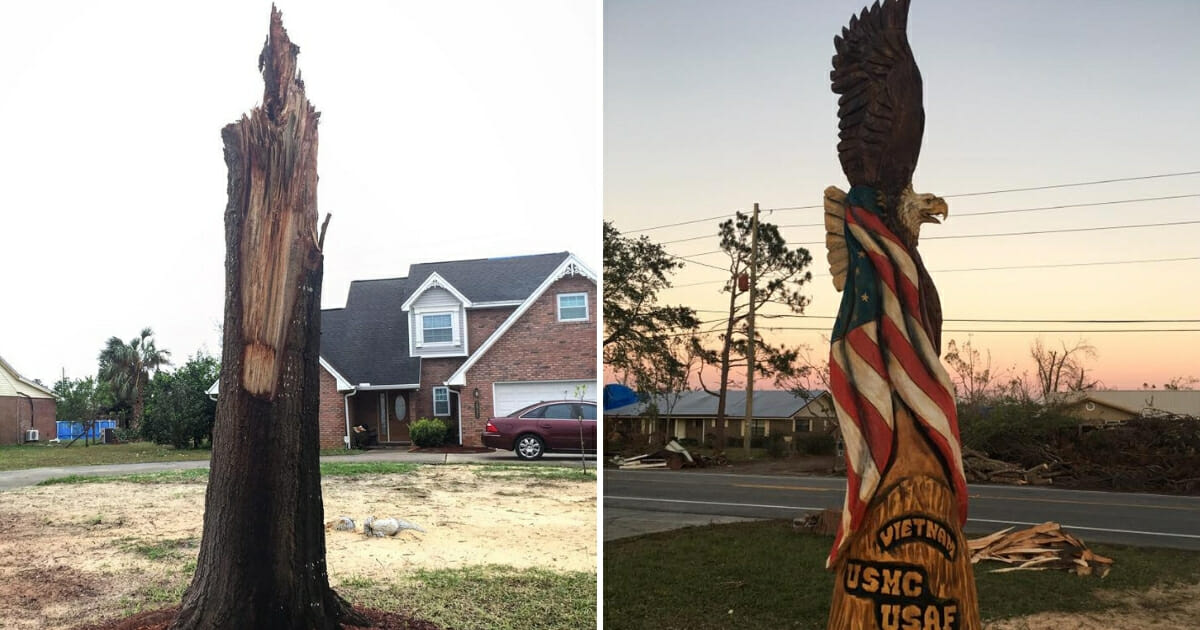 Sonny Brewer knows a thing or two about fighting for your country.

A Vietnam veteran, he’s faced multiple challenges in his life. Adversity is an enemy he’s confronted more than once, so it’s little surprise that he decided to do something when Hurricane Michael ravaged the area in which he lived.

As per WMBB, Brewer saw a tree damaged by the storm and decided to turn it into a monument of hope rather than a reminder of desolation …

The focus of Brewer’s mind was on transforming the tree into a symbol all could get behind. Channeling inspiration from his own life, the vet stumbled upon an idea that was sure to embolden all who saw it: an eagle in red, white and blue.

His aim was to offer something back to all those on the verge of losing hope. In that respect, Brewer’s work was certainly a success.

This is breathtaking!! Even with all the destruction we have here in the Panhandle, my neighbors have turned their…

Brewer hired local sculptor Chad Gainey, a man he had confidence in when it came to completing the task to an adequate level.

“You can look back and say wow I started with a dead tree and now it’s a piece of art,” Gainey said, as per WMBB.

The symbol now stands on Baldwin Avenue and State Street in Panama City, Florida, and has become quite the attraction for all who see it.

For Brewer, the fact that his eagle has proven as popular as it has is nothing short of spectacular.

“I fought for this country. I have friends under that flag. That flag means a lot to me,” said a veteran who encountered the flag.

A combination of Brewer’s imagination and Gainey’s ability has birthed a symbol of hope for anyone who passes it. As Brewer says: “It’s my tree but the symbol belongs to the people of Panama City.”

What an incredible idea from Brewer. His symbol of hope is certainly something we can get behind!