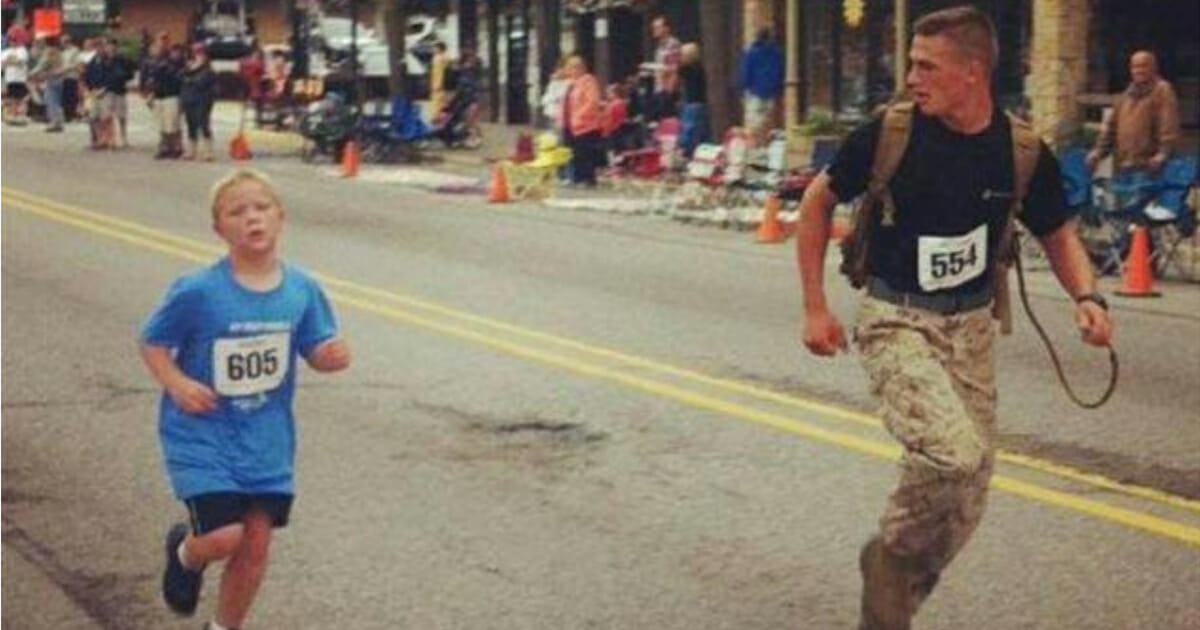 When Lance Corporal Myles Kerr signed up to run a charity 5K marathon with his fellow marines, he did so with the intention of placing as well as he could.

Little did he know that in the course of running the race he would become a viral sensation. Not for besting the competition or breaking any running records, but for exhibiting a kindness and compassion that has touched the hearts of many.

Midway through the 5K race, which took place in Charlevoix, Michigan in 2013, Kerr came upon a group of children running the same event.

One of the children, a 9-year-old boy, was struggling to keep pace with the others, and eventually fell so far behind his companions that he lost sight of them.

#respect for Lance Corporal Myles Kerr for encouraging this little boy. I'm sure the boy will remember that day & the kindness of that Marine for the rest of his life. #Marines #inspiration https://t.co/diyI5vcE8F

It was then that the boy, Boden Fuchs, saw Myles Kerr. He reached out his hand to the Marine and asked, “Sir, will you please run with me?”

19-year-old Kerr, who was running in his boots and gear in a bid to work on his endurance, knew what he had to do.

He slowed down, deciding that giving Boden support was more important than beating his fellow Marines and winning the race.

Boden and Kerr crossed the finish line together, having formed a bond that transcended mere competition. What’s more, someone was able to snap a photo of the sweet moment, one which proceeded to take the internet by storm.

Kerr remained humble through all the praise. He tweeted: “I was just doing what any man would do.”

The Marine then told The Petoskey Times: “I think we clocked 38 minutes by the time we crossed the line. I usually can run the 3 miles in 17 or 18 minutes. He reminded me of myself at that age, but I couldn’t have done what he did then.”

Kerr’s fellow Marines thought that their friend had perhaps injured himself when they didn’t find him at the finish line. When they saw what was really happening, they cheered the duo on.

The Facebook post reads: “Several minutes after the other Marines he was with had finished, Lcpl Kerr still had not crossed the line. They feared his extreme level of motivation may have caused him injury and/or fatigue resulting in him dropping out of the race. Moments before they ran back through the course to recover their fellow Marine, Lcpl Kerr came around the last turn along with this small boy.”

Way to go Lance Corporal Myles Kerr, you’re an inspiration to us all! And way to go Boden Fuchs, for finishing the race despite facing adversity.

The companionship between these two reminds us there is yet good in the world if you look for it!