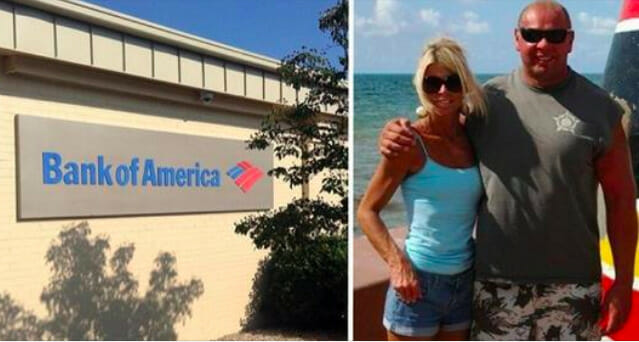 Buying a home with hard cash is probably one of every young family’s dreams. Being mortgage free is of course difficult and some would argue even impossible in today’s world.

Nevertheless, Warren and Maureen Welsh Nyerges from Naples, Florida, certainly had that ambition, and through hard work and determination, they ultimately made it come true.

Shockingly, some time later, in a mess up from their bank, their Golden Gates estate home was foreclosed. Though the situation was ultimately rectified, the resulting legal fees from their issues with the bank meant the bank now owed them over $2,500!

But no matter what they did, the bank simply wouldn’t pay back.

Warren and Maureen were fortunate to own their home, free and clear. One year after paying for their home in hard cash, they received a foreclosure notice from their bank — an obvious mistake by Bank of America who they had purchased the home from.

At first, the couple attempted to settle the issue directly with the bank — but to no avail. They were ultimately forced to resort to the courts to help them resolve the matter.

Warren and Maureen were forced to hire legal representation to help fight the unlawful foreclosure — resulting in over $2,500 in legal fees — and not to mention one year and a half of unnecessary headaches for the couple.

The foreclosure charges were subsequently dropped, and Warren and Maureen could now rest assured that the bank wouldn’t be attempting to take their hard earned home away from them.

There was just one final problem: the bank was completely uncooperative in paying them back their legal fees, despite being liable to do so following a court order.

Five months went by and the couple were yet to receive a penny back from the bank. That’s when their lawyer, Todd Allen, decided to do the unthinkable.

The lawyer managed to obtain a court order to legally seize assets from the bank. With that order in hand, the couple and lawyer, accompanied by police officers, then simply turned up at the branch and prepared to take what was theirs.

The bank had no choice left: they were to either pay up — or lose possession of various property at the branch.

“I instructed the deputy to go in and take desks, computers, copiers and filing cabinets, including cash in the drawers,” Allen said. “Having two sheriff’s deputies sitting across your desk and a lawyer standing up behind them demanding whatever assets are in the bank can be intimidating, but so is having your home foreclosed on, when it wasn’t right.”

Naturally, the bank manager couldn’t believe his eyes and was visibly shaken. Ultimately, the brilliant plan worked: an hour later, the couple was cut a check and were on their way back to their fully-owned home.

Watch a news report about this amazing incident below.

We don’t hear stories like this every day! Share with your family and friends if this outcome had you cheering, too.