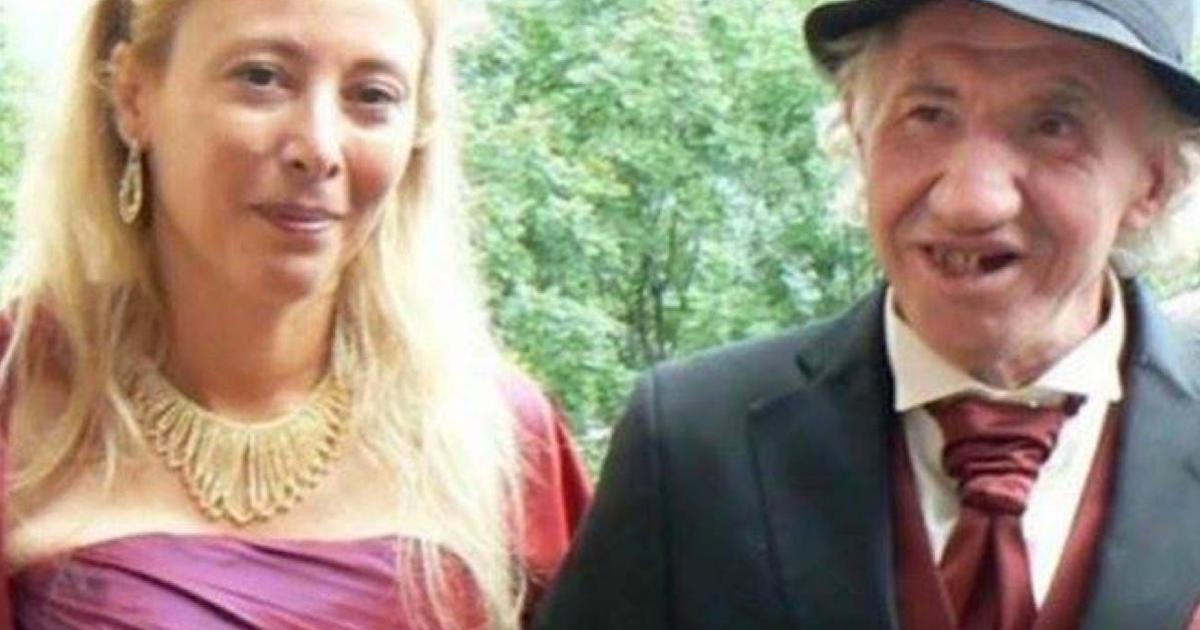 He was something of a hermit and lived in a small cabin without running water or electricity.

But thanks to his simple lifestyle, he was eventually able to amass a huge fortune.

In addition, he also inherited a large stretch of land near the village of Puy-Saint-Pierre.

It was the perfect location for a ski resort or perhaps some luxury condos.

Over the years, the value of the land skyrocketed, but Marcel was never interested in selling it.

Though Marcel Amphoux was sitting on a fortune, there was nothing about his appearance or lifestyle that would suggest he was a millionaire.

Still, he did quietly share his wealth with a select few, mostly his family and friends. He built a few of them cabins on his land where they could live for free.

Women had never been interested in Marcel. But when he met Sandrine Devillard from Paris, who was 21 years younger than him, everything changed.

Sandrine, a cosmopolitan woman from Paris, knocked on the door of Marcel’s humble home in 2010.

She explained that she was a real estate broker and was interested in buying Marcel’s land.

Marcel flatly refused. But when Sandrine invited him to dinner, he agreed.

The pair instantly fell in love. But both friends and family tried to warn Marcel that this mysterious woman was only after his money.

And the odd couple undeniably turned heads—French magazine Le Point described Marcel as “living like a bear” up in the French mountains and Sandrine was a young city slicker who wore expensive designer clothes.

But Marcel seemed happy to finally find the love of his life.

And in 2011, just a year after that first date, Marcel and Sandrine were married.

The couple tied the knot in Puy-Saint-Pierre’s town hall. Sandrine was dressed in a red designer dress. Marcel wore a frumpy suit.

The protests from the wedding guests were loud.

“People were booing and jeering. They all knew Marcel well and considered that Sandrine was solely after his property and money,” villager Jacques told the Daily Express.

Sandrine Devillard was hurt by the rumors that surrounded her, but after the wedding, her skeptics were even more enraged.

Sandrine continued to live in Paris and seldom visited Marcel’s cabin in the Alps.

“Marcel is a man from the Middle Ages, even prehistoric times,” Sandrine explained. “I am a true Parisian. I still live there. But I visit my husband as often as I can. To see him and to make him smile.”

One year after the wedding, the locals’ suspicions grew.

Marcel was involved in a car accident with Sandrine and two of her friends. The driver somehow lost control and crashed the car. Marcel died, while Sandrine and her two friends survived.

Rumor had it that Sandrine had something to do with the accident, but there was no evidence.

A devastated Sandrine cried throughout Marcel’s funeral, but she got no pity from his family and friends.

Sandrine announced that she was Marcel’s sole heir, meaning she would become an instant multi-millionaire.

When Sandrine told Marcel’s friends that she was going to evict them and develop the land, the situation reached a boiling point.

Then in the midst of the uproar, a statement was released that turned the story on its head.

It turned out that shortly before his death, Marcel had revised his will. He left all of his possessions and money to his family and friends.

Marcel even gave his friends ownership of the houses he had built for them.

Sandrine, on the other hand, got nothing. It almost seemed like Marcel had finally listened to his friends and family.

Sandrine argued that the signature on Marcel’s will was forged and took the case to court.

But in 2016 when the final verdict came down, the court deemed the signature to be authentic, writes the French newspaper Dici.