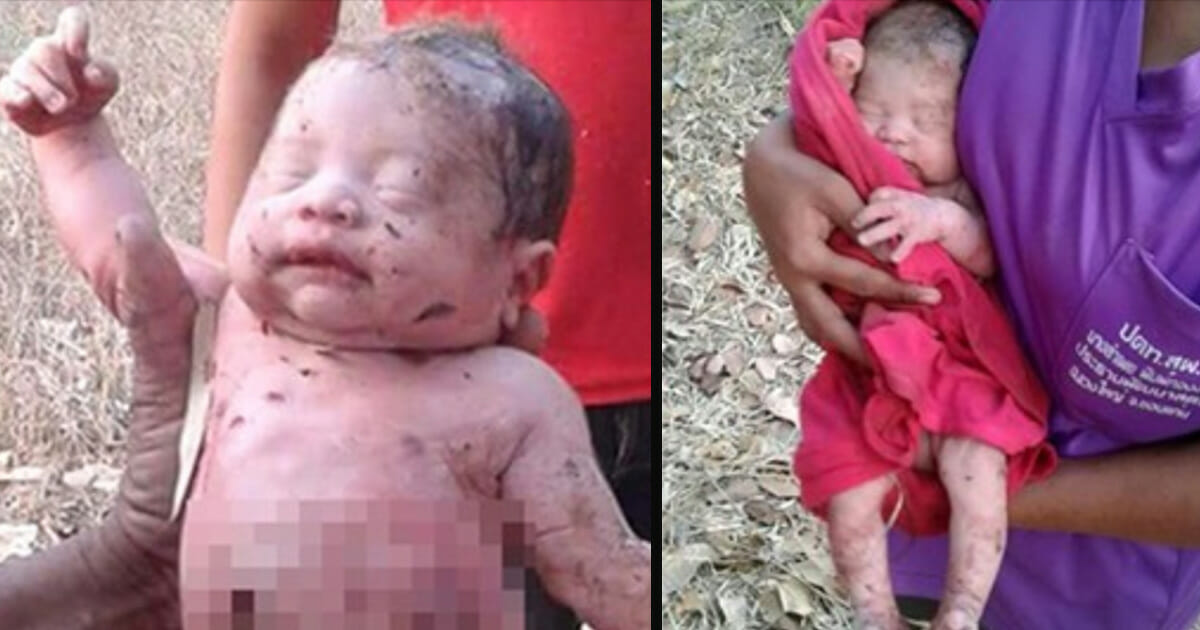 A young boy must surely be hailed a miracle baby in Thailand after surviving being stabbed 14 times and buried alive by his birth mom.

According to reports, Kachit Krongyut was taking her cows to graze on her farm in the district of Wangai of Khon Kaen Province, Thailand, when she heard what sounded like wailing coming from the dirt.

The soil patch nearby looked as though it had been recently disturbed, and so Kachit decided to investigate the source of the noise. What she would go on to find would send shockwaves across the internet.

In February, 2016, Kachit Krongyut believed she was about to unearth a small animal when she heard soft wailing coming from a pile of soil. Upon closer inspection, however, she was horrified to realise that a baby’s foot was protruding from the mud.

As per the Daily Mirror, Kachit immediately leapt into action, digging the baby out of the earth with her hands and calling for help.

Miracle as a baby who was stabbed fourteen times and then buried in a field is found ALIVE https://t.co/lUxdUMAHCA pic.twitter.com/KAWdNBsanW

“At first, I thought someone had buried their pet alive, but then I saw a foot,” Kachit told local media. “I tried to control myself and called for help. The baby was buried with its face facing down.”

After lifting the baby from a shallow grave, Kachit realised he’d been stabbed 14 times all over his body. Someone had simply left him to die.

He was rushed to the Wangai hospital, where doctors surmised he’d been suffering abuse from birth. It transpired that the weight of the soil had saved him, producing a pressure that stemmed the blood flow from the stab wounds.

Fortunately, police found footprints and motorcycle tracks nearby that led to them apprehending the child’s 42-year-old mother. She was charged with attempted murder and abandoning her child.

Baby stabbed 14 times and buried alive by his mum is ALIVE after miracle rescue https://t.co/uT6TFwP36k pic.twitter.com/REERG2KU6W

As for the baby, named Aidin, he made a miraculous recovery. After three months of treatment, Aidin was taken to an orphanage and later adopted by a couple from Sweden.

We can’t even imagine the sort of pain Aidin must have gone through, nor the state of mind someone has to be in to commit such an atrocity as this.

Share this article to show the world that child abuse will never be acceptable in any form!