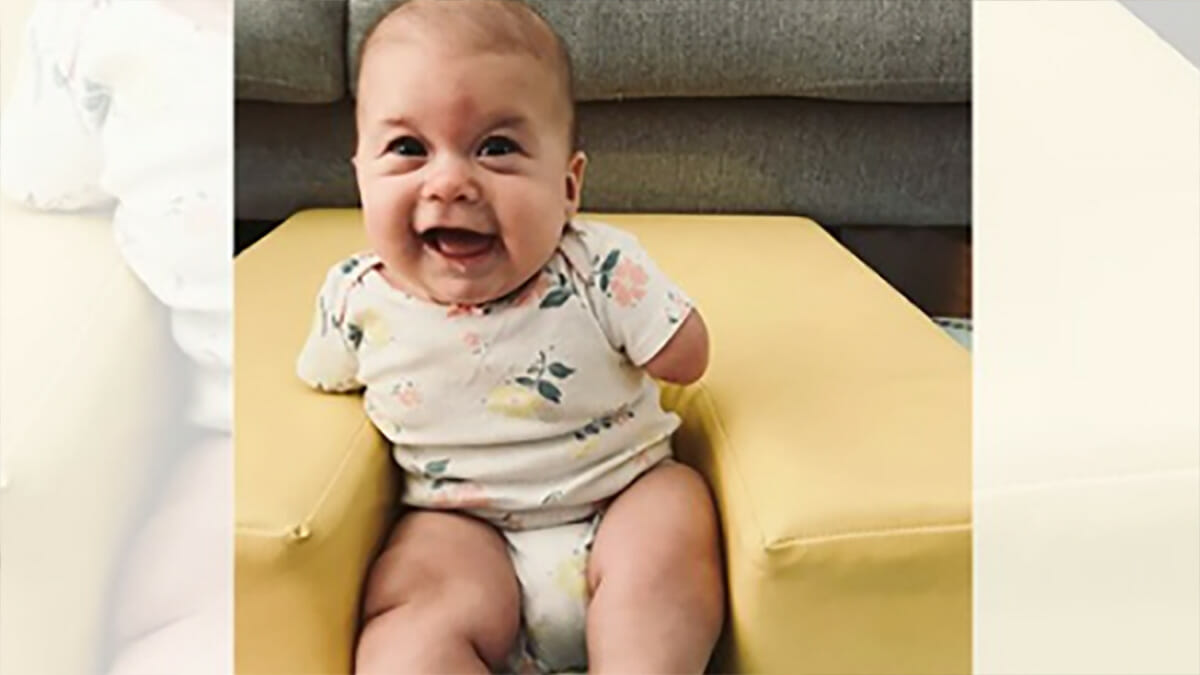 It was the news Vanessa McLeod and her husband were thrilled to hear; they were expecting their second child, another beautiful baby girl.

But their joy would be overcome with doubt and worry when a routine scan uncovered something the couple were not expecting.

Vanessa’s husband was away for work and the midwife had asked them both to come in early so she could talk about something that had appeared on the ultrasound. Vanessa feared the worst.

“She was already so deeply entrenched in my heart, already a piece of me, a part of my being. I didn’t want to lose her. In that moment, I felt like I could handle anything, except losing her. I just wanted to keep her.”

Doctors told Vanessa that her baby was missing her hands and forearms.

“This felt like a punch to the gut. It stole my breath. It keeled me over and the sobs tore out of me, and visions of my perfect little baby shattered,” Vanessa wrote on Love What Matters.

As Vanessa processed the news her dad said: “She’s going to be a blessing to our family. I think our family needs someone like her. She is going to teach us so much.”

Unfortunately, the doctors didn’t offer much comfort to Vanessa in the appointments that followed.

“I felt like the doctors were telling me that it was over. That her life wasn’t viable, that we had lost all hope of bringing home a baby,” she said.

“I was shocked when the doctor suggested we terminate. THAT had never crossed my mind, but here they were, offering it. When my husband and I started to express that we wanted to keep her, the medical geneticist said, briskly and brutally, ‘But think about her quality of life. She’s going to have no hands.’”

Vanessa said she felt as though the doctors had made her feel guilty for wanting to keep her baby in questioning what kind of life her child would have.

“I’ve always been pro-choice, but knew I could never personally have an abortion. But in that moment, I felt doubt,” she said.

And in that moment, they both knew their daughter was theirs to love and protect whatever her situation.

She said she was in perfect health and upon seeing her beautiful face for the first time “felt so much peace.”

Ivy has since “grown leaps and bounds and met all of her milestones on time.” And when thinking about the doctors who suggested she had an abortion, Vanessa says she wished they “could hear the magical sound of [Ivy’s] giggles.”

Vanessa and her husband are filled with hope for the future. Vanessa says she wants to “instill in her (Ivy) all the confidence she needs in herself to take on the world.”

Vanessa says she has encountered so many resources for children with limb differences, despite what the doctors told her. And with the love and support of her family Ivy will grow and adapt, never missing something she never had.

But most importantly she will know that she is “absolutely, unequivocally, undeniably perfect,” Vanessa wrote.

We think she’s absolutely perfect too. Vanessa and her husband are an inspiration to other families who find themselves in similar situations.

Please share so more people can see this beautiful family and wish them all the happiness.